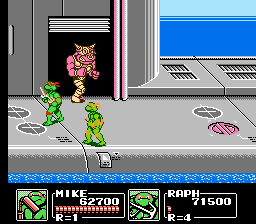 A few months after Turtles in Time was released in the arcades worldwide, the next game in the console series was released at the quickly fading NES system. Teenage Mutant Ninja Turtles III: Manhattan Project was initially released in Japan in December of ’91 under the title Teenage Mutant Ninja Turtles II, and made available in the US in February of 1992. Despite being promoted in several European gaming magazines and given a tentative summer release date, it was never released in the region. This along with the fact the Super Nintendo was already on the market, resulted in Manhattan Project to go largely unnoticed.

The main team that had been responsible for The Arcade Game was busy handling the sequel to that game, and with most of the other development teams being focused on either arcade or Super Nintendo titles, a new team was made consisting of young talent working essentially as a B-team, relegated to older hardware or side projects. The team, named Kuu Neru Asobu (くうねるあそぶ = Eat, Sleep And Play), was largely untested with the exception of a few that had done assistant work on 1 or two previous titles. The only member on the team with prior responsibilities in a TMNT game was Masaaki Kishimoto, having been a visual programmer on The Arcade Game. The Kuu Neru Asobu name was used for one other game, The Lone Ranger before it was retired, though the team stuck together for a few more titles mostly based on other franchises such as Batman and Zen: Intergalactic Ninja.

Even though the title alludes to the creation of an atomic bomb, things are not quite that serious thankfully. The four brothers are now on vacation, enjoying some shades on the beaches of Florida, out in the open for all to see, thinking Shredder and Krang is trapped in Dimension X for good after the triumph in their battle at the end of The Arcade Game. Tuning in to see April’s live news coverage, things again go wrong as Shredder takes April captive on live television and lifts the entire island of Manhattan off the ground, making it a floating island. The challenge is issued, if the foursome wants to see April alive, they have to come rescue her.

The controls are as always the familiar layout set by The Arcade Game, playing identically to the NES port of that game. Individual special moves as seen in Turtles in Time are now featured, and are even more fitting their characters than before. Leonardo uses a Cyclone spin attack with his katanas, Mikey has the more playful Kangaroo kick, Raph has a drill attack while Don has a rolling knockout staff strike. These new special attacks are much more characteristic and visual than those found in the games before Manhattan Project. Apart from the special moves, the gameplay remains very similar of that found in The Arcade Game, with every corner polished and fine tuned to a much smoother product. Controls are responsive, difficulty is perfectly balanced as the game progresses and the stages are longer and much more eye pleasing. The boss roster is also bigger than ever before. It also adds an attack where you stab an enemy and chuck them over your shoulder. This attack will kill standard foot soldiers instantly, but give less points than other attacks. This gives a neat little risk/reward mechanic, in that you can take the easy route but be awarded a lower score, and therefore less extra lives. It also fixes the invincibility period from the NES TMNT II after hitting an enemy.

The more interesting aspects to Manhattan Project are found in the design and the liberties taken. The storyline for instance, even though it fits in with the outlandish premise and tone of the series, has a much more Japanese flair to it, with the concept of an island being ascended into air and floating. The overall style also leans more towards the common Japanese art styles, with characters having more exaggerated facial expressions and body language than before, and larger characters such as the bosses are done in a Chibi style with larger heads and smaller framed bodies.

The locations and their exterior splendor are also much more satisfying in this game than what it is in Turtles in Time. From the beaches of Florida to downtown Manhattan and beyond, the stages are long, dynamic and full of life. The scrolling now goes in all directions rather than just left to right, and stage hazards are more interesting in that the stages allow for more platforms and changing scenery. Characters can also fall off ledges now and even hold onto the edge, similar to what was later implemented in Battletoads & Double Dragon a year later, adding greatly to the stage dynamics. The boss roster is the most expanded yet, making use of a greater number of characters from both the cartoon and the toyline, with Dirtbag, Groundchuck, Tohka, Rahzar and Leatherhead amongst the villainous foes.

Coming out in the later years of the NES cycle, Manhattan Project fires on all cylinders and makes use of some of the most colorful and vibrant graphics found on the system, and the soundtrack is among the very best on the console. The soundtrack is in fact so well made that American video game composer Jake Kaufman has cited it as one of his main inspirations for going into the field himself along with the Contra games, and on his website a remix track is offered from his earlier days of arranging and composing music. As fantastic of a co-op brawler Turtles in Time is, Manhattan Project arguably tops it with more appropriate locations, incredible music and greater length, as well as a better defined moveset for the Ninja Turtles themselves.

Though in Japan the game was released with a rather generic toon turtle style cover art, Michael Dooney was brought in to draw an exclusive cover for the American release more suited for the game and showcasing more character based on the game’s content. While the cover is one of Dooney’s greatest TMNT related works, lack of communication between the parties resulted in him only being given a short explanation of the game’s storyline and the fact that the turtles battle many familiar foes from the TMNT universe. Not being familiar with the game or Konami’s previous efforts, Dooney drew in several characters not actually in the game, most noteably Triceratons and Casey Jones.