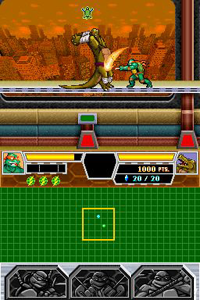 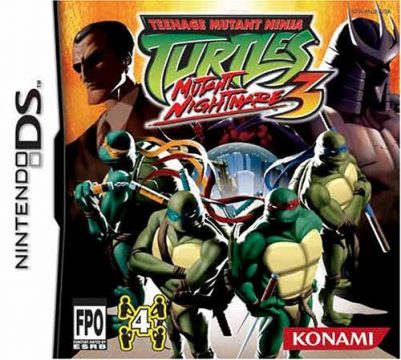 Despite shifting from Game Boy Advance to NDS, Mutant Nightmare‘s handheld version is fairly similar to Battle Nexus, using the same engine and graphics straight lifted from that game, with only minor changes to the aesthetics to accommodate for the new features added to the game.

The most immediate difference is of course the use of touch screen which is featured throughout the game and used in various ways to efficiency. For standard, it is used as map and team up system to call onto the other brothers to navigate through the enlarged areas and assist in fights. At times the bottom display will change into a puzzle specific view, requiring the use of touch to solve the many riddles and obstacles presented in the game. This system, along with the visual appearance of the game shares some similarities to the Castlevania series as they became available on the Nintendo DS as well.

Combat is even further withdrawn from the overall game here than what it was in Battle Nexus GBA, though to Mutant Nightmare‘s credit the battles feel a bit more engaging thanks to the use of cooperation between the turtles and large colorful sprites. Rather the issue is with the fact that it’s not much of a sequel, and rather a “2.5” deal with the game looking and feeling so identical to Battle Nexus, and stages dragging on for way to long for the novelty to survive. The touch screen features are cheesy and tacked on, par for the course of earlier titles on the DS, but this game was already one year into that handheld’s lifespan and feels like a cheap GBA port with the least amount of creativity put into the touch puzzles, usually just involving turning a valve or typing a short numeric code. Compared to Battle Nexus, which was for the most part a very enjoyable game, Mutant Nightmare just serves to remind you of that particular title due to its likeness and raise the question “why aren’t you playing that instead?”

Mutant Nightmare DS was the very last Konami-developed TMNT game, and shortly thereafter they would let the deal come to a close and leave the franchise on the market for new developers to take a shot at. Baxter Stockman appears as an exclusive boss to the DS version.