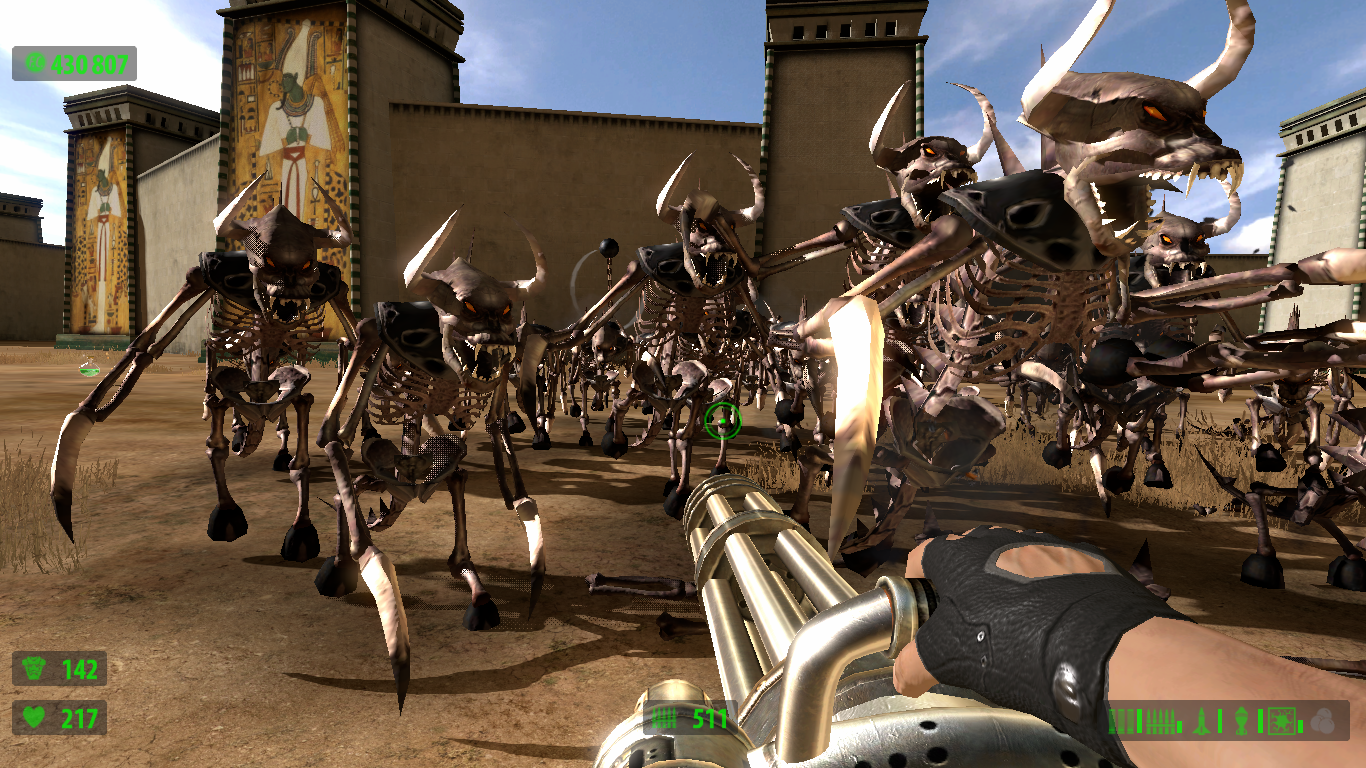 Images used for First and Second Encounter come from the HD remasters. 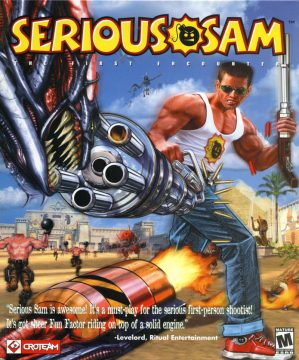 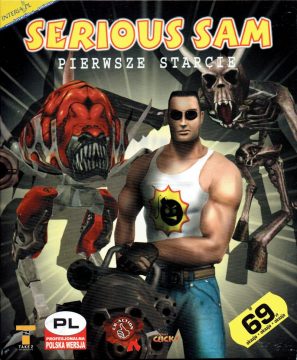 Warning: This article is going to get serious! It’s time we talk about the early 2000s king of B-games, Sam “Serious” Stone, alien monster slayer and savior of the Earth…or might be one day. He’s still working on that last part. A man from the future, Sam has been sent back in time with the mysterious Time-Lock artifact to defeat a weaker version of Mental, an evil alien overlord trying to wipe out all of humanity. Serious Sam: The First Encounter was a breath of fresh air in 2001, a return to the days of DOOM and the first Quake, switching from Half-Life‘s slower and story focused design for fast moving shooting and much gibbitude, brought to us by the Croatian studio Croteam.

The series being a return to classic first person shooter design is an exaggerated reputation. The big difference between Serious Sam and the games it was inspired by is that those older games had map design. Serious Sam does not. What it has instead of piles and piles of monsters and evil traps that would make The Plutonia Experiment devs cry a proud tear. This is the sort of game where if you pick up a one point health pill, you could spawn a chunk of baddies who will give you a bad time, and it happens constantly. Or, sometimes, the sound enemies teleporting in sounds twenty times in a row and the game cheekily declares after that you found a secret. Serious Sam is an exercise in frustration on higher difficulties, but in a sort of charming way where you know the devs are absolutely trying to troll you. If that doesn’t sound like a fun time, the game’s two easy difficulties are much more manageable and still offer some challenge here and there during larger mobs, especially during the now infamous kleer alley. Tourist mode is bugged in a few versions, though, so be aware. 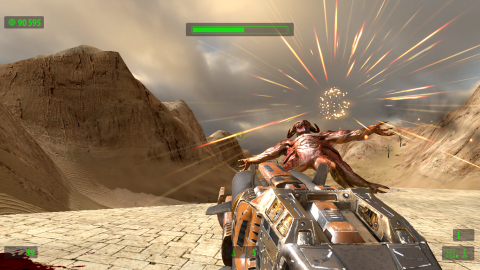 Sam’s weapon set is basically a mix of classic DOOM and Quake weapons, complete with a shotgun, double barrel variant, rocket launcher, hitscan chaingun, energy gun that deal more damage than the chaingun but fires projectiles with travel time to take into account, and so on and so forth. It’s also worth mentioning that there’s no actual reloading in Serious Sam outside the colt pistols and the shotguns, and even those reload times are minor. This is good because there are so many monsters to deal with that you often want to be shooting all the time. The majority of Serious Sam is moving backwards and holding the shoot button because if you don’t, you will die. The rest is being surprised by a dickishly placed Arachnoid and getting mowed by its hitscan chaingun. They’re less common on easier difficulties, but still tend to litter the field in high places towards the end game.

What makes Serious Sam special is that it’s a spectacle. It is unbridled chaos and you’re forced to deal with ridiculous odds, a legitimately unfair feeling game that’s so ridiculous that it puts a smile on your face even while you’re being juggled around by a horde of kleers, the charging alien skeleboys you can take out with a well placed double barreled shot, but become a huge problem in high numbers. All the enemies have their own clear purposes in the game, and many encounters are carefully designed to force you to figure out how best to deal with diverse mobs, like having you survive against a giant monster throwing fireballs at you while a werebull won’t stop charging at you. Not even DOOM 2016 reaches the same level of energy that Serious Sam does in its massive fights, which might be why that game has more mainstream appeal. 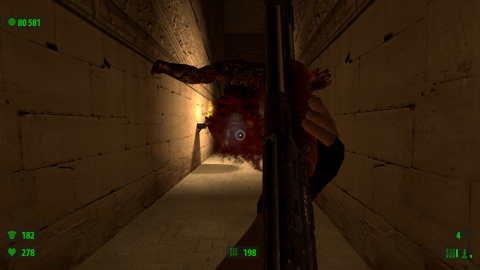 Serious Sam is extremely niche. It takes a lot from the classics, including hidden secrets to find and a snarky meat head hero (parodying Duke Nukem and voiced by John J. Dick, and yes that is his actual name), but the outright aggressive design creates a situation where most people trying any game in the series will reach a breaking point and just stop. You’re here for the experience of fighting huge numbers and complicated swaths of baddies that require constant thinking to survive them, creating stress more in common with a zombie mob shooter than a classic FPS. Not everyone is looking to be stressed by a game, and even FPS fans can be turned off by how openly antagonizing the design often is. However, those that gel with Serious Sam really gel with it, and have kept the series going for decades.

It’s also worth noting the game had a good deal of features, the strangest one being being able to play it in third person mode, and split screen online co-op. A few other versions were also released, including a terrible Palm OS port, and an Xbox port packaged with The Second Encounter that shrunk the levels and added features like lives, gaining lives with the formerly pointless high score system, save points, a combo system to gain more points, and treasures to collect. It also added auto-aim, which also appeared as an option in the HD remaster versions on PC. 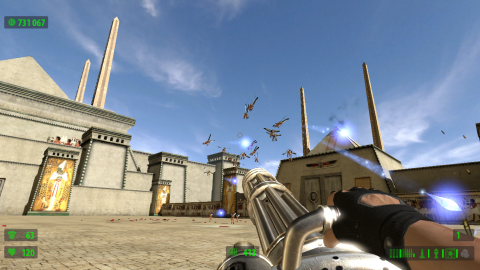 Said HD versions, created in the newest version of the Serious engine, made some style changes to line up with the third game and minor changes due to limitations with the new engine, but added online multiplayer. It’s probably the best way to play the game. If you want a more classic experience, a fan made version called Classics Revolution was also made into a free update for owners of HD versions of the first two games that uses an updated version of the original Serious engine. There’s also the Fusion 2017 bundle that acts as a hub for all base Serious Sam games except 2, which was also a free update, and a VR remake. And I didn’t even mention the Gold edition, which the Xbox released in based on! That had an additional episode made of fan made levels alongside The First Encounter and The Second Encounter, but is otherwise just a basic bundle of the first two games.

The First Encounter was a huge success, moving 89,000 copies in the United States by October 2001 and gaining a ton of awards from publications, including a game of the year award from Gamespot alongside Grand Theft Auto III. Its HD versions made with help by Devolver Digital in publishing have kept the series in the public eye, and made it a sort of weird cult classic among first person shooter fans. The First Encounter was just a warm up, though, as things got more serious with the follow up, The Second Encounter.