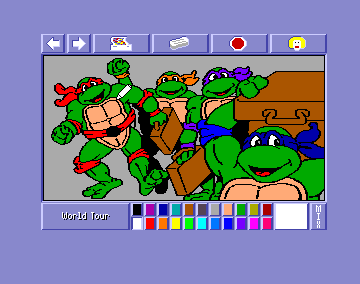 Brian Rice created a new series of simple fun for the youngest with his Electric Crayon Deluxe games. These titles are picture books with uncolored pictures, inviting the kids to use the color map and filling in the blanks to create some toddler works of art. From 1985 to 1992, 11 of these titles were developed, ranging from Sesame Street, Super Mario and Inspector Gadget. In 1990, no property was hotter than the TMNT, and so they got their own Electric Crayon book.

Teenage Mutant Ninja Turtles: World Tour isn’t much of a game, nor does it claim to be. All you’ll find within this digital book is outlines and 22 colors (which can be mixed) as well as an educational description of each of the landmarks that the TMNT are visiting. After coloring at your hearts desire, there is an option to print out the work to be hung up on the wall. In all, there are 30 different locations that the turtles visit, their home, Statue of Liberty, Stonehenge, Eiffel Tower, Bavarian Castle, The Alps, The Kremlin, Leaning Tower of Pisa, Acropolis, Sahara Desert, The Nile, The Sphinx, Taj Mahal, Mount Everest, Great Wall of China, Mount Fuji, Australian Outback, Galapagos Island, Amazon River, Panama Canal, Teotihuacan, Golden Gate Bridge, California Redwoods, Yukon Territory, Mount Rushmore, Mississippi River, Kennedy Space Center, Lincoln Memorial and the White House.

As interesting as it is to see the turtles photobomb every known landmark known to man, the fun does run quite thin halfway through a picture, since it basically is just like a bucket fill in Paint. Kids will want to draw mustaches on faces, teens would want to create as much awkward innuendo as possible, but there’s no option to actually draw with the crayons. The pictures themselves look alright for the most part, though there are quite a few that have some really weird proportions and confusing angles. It does however touch on the heart strings and remind you that no matter where in the world the turtles are, their hearts will always be with the USA, as this tear jerker showcases: 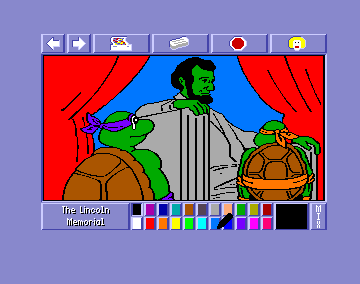 Wait, is that Lincoln or a Zentraedi?

Anyway, considering the mass appeal of TMNT at the time, and the fact their faces and imagery was on virtually anything that could be bought with money, it’ not an all out bad product, and kids do genuinely love to play around with colors. In addition to DOS and Amiga, World Tour also saw release on Commodore 64, Amstrad CPC and Atari ST. There’s no real difference between any of these other than the C64 and the CPC having less colors and no print function.