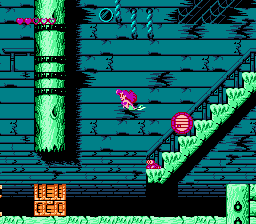 Considering that The Little Mermaid movie was released in 1989, the video game release certainly took long enough. Regrettably, the game as a whole seems to have been treated as an afterthought by Capcom. It’s not unexpected since the Super Nintendo had just been released. Rather than fashioning the game after the movie, Capcom picks up right before Ariel’s marriage. Ariel learns that Ursula has taken over the sea, endangering all life within it. Ariel stops the wedding, leaps back into the sea, and instantly turns back into a mermaid.

Like most of the Capcom games, The Little Mermaid is a sidescroller. Considering Ariel is a mermaid, there’s very little platforming involved. Most of the game involves navigating Ariel through a series of underwater passages and mazes, which is an interesting change from the barrage of platforming elements Capcom built into all of the other Disney games. Occasionally Ariel can leap out of the water and onto dry land to collect items and avoid enemies. Movement on land is difficult, naturally, and is handled by weakly flopping along the surface. It’s really strange to see, and often times leaves you wide open to attack by land-based enemies. 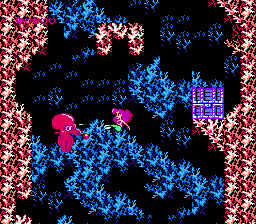 While underwater, Ariel can whip her tail and create a squall of bubbles that encases enemies in a portable bubble. The bubble can then be thrown at other enemies to harm them, or chucked into crevices revealing hidden power ups. Crystals can be collected to increase the power and range of the squall, though they’re lost whenever Ariel dies.

With that said, death doesn’t come easily in The Little Mermaid. The game is extremely easy, and experienced gamers may only die once or twice during the entire game. The game is also short-only five stages long-and could easily be beaten within much effort. Although it doesn’t make much difference now, it’s scary to imagine paying $50 back in the 90s for a game this short and easy. On the other hand, it was probably meant for younger kids and other more inexperienced gamers, and coming from that viewpoint, it’s a pretty fun game.

The Little Mermaid also doesn’t look as good as it could. Many of the backgrounds are barren, while the actual stage itself is boring. It would have taken very little effort to add something-either fish or plant life- to the backgrounds and stages. The level designs are bland as well. Each stage involves swimming around boxes or up passageways while avoiding an occasional murderous guppy. To its credit, the boss fights are more interesting than the ones in The Rescue Rangers, but that’s not saying much. 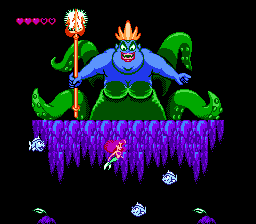 Like the Talespin port, the Game Boy version of The Little Mermaid does nothing to improve upon or change from the console edition. The graphics and backgrounds are slightly weaker, which is to be expected from the Game Boy. Aside from that, there are no changes to the stage layout, no new items, and no remixed music. To its credit, the music is almost identical to the NES version, which is somewhat impressive. Cheap gamers back in the day could have purchased the Game Boy version and not lost out on any gameplay the NES version offered.