The NES version of Strider was developed simultaneously with the more famous arcade version, but it’s a huge departure from the style of the arcade game. It was one of the many high-quality titles released for the NES amongst the tidal wave of great games made for it in the late 80s and the early 90s. It was directed by Masahiko Kurokawa, who also worked on other famous games like Ghosts ‘n Goblins and Resident Evil. 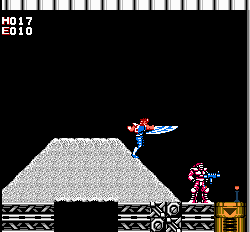 First off, the pure frenetic action of the arcade title is not found here. What will be found is an action/adventure quest that actually has a developed plotline. At the Strider headquarters, the space station Blue Dragon, Hiryu receives a rather disturbing message from Strider vice director Matic. Fellow Strider Kain has been captured by Kafazu forces, and Hiryu expects a rescue mission. Quite the contrary, he is instructed to find and kill him.

Hiryu hunts him down, but he does not kill his comrade. Instead, he extracts information out of him, and our hero learns of the mysterious “Zain” project. When Hiryu hears that this is a super-weapon to brainwash, hypnotize, and make zombies out of the world’s population, he knows he must stop the project and eliminate those responsible.

As enterprising a plot as that sounds, the translation is really quite poor. To quote: “You’ll be sent to your grave by me Mr. Kain.” Yes, that’s actually said in the American release, those exact words with the same lack of punctuation. 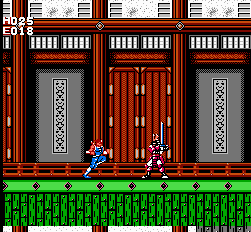 The game starts with going to Kafazu through the means of the Blue Dragon’s transportation system. After exploring the level and finding a couple of useful files, Hiryu has to go back to where he began and jump back up to the Blue Dragon. After analyzing the files at the base, he is able to travel all around the world to Egypt, Australia, Japan, China, Africa, and even Los Angeles. It all ends at the enemy leader’s base, the Red Dragon, and Hiryu must eliminate him and his evil once and forever. Each stage is non-linear to an extent, and some of them even have to be returned to more than once to explore everything that can possibly found. It may get tedious when trekking through Kafazu several times, but it has to be done. Many levels feature pneumatic tubes that allow for quick and easy travel between destinations. Additionally, by performing certain feats such as capturing enemy officers and destroying Zain machines, Hiryu gains levels, and with them, more energy and special abilities, which can be selected by going into the Select menu.

The graphics are nothing special, but they get the job done. The character faces that pop up on the monitor at the Blue Dragon are quite detailed, and while they don’t move, the Zain machines are huge and have a rather eerie appearance to them. Hiryu’s two frame running animation looks pretty odd, though. 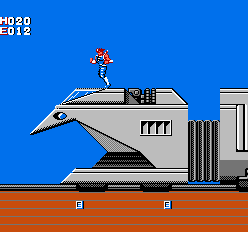 The music is awesome. Right when the game opens up, the loud background music sounds somewhat like muffled explosions are going off in the background. Kafazu’s music gives the feeling of infiltrating a highly protected Russian base. China’s BGM also feels like invading a secret base, Bond-style. The sound effects, on the other hand, are not that stellar. Most other sounds are drowned out by the slashing of Hiryu’s cypher, which tends to get annoying after repeated use, and sounds lame compared to the arcade game.

As developed and meticulous as everything is in this game, it just has this unfinished feel that’s hard to shake. It’s not that the game isn’t long enough, but things can become incredibly glitchy at times. One of the most notable problems involves jumping, which is an incredible pain due to the awkward physics. Wall jumps, which are used to bounce off vertical surfaces, are frustrating to perform, as Hiryu inexplicably plummets when he touches a wall in mid-jump, and the whole process of scaling a wall is very irritating. Like the arcade game, there are also several high jumps that require running down a slope to gain momentum, but the physics are so wonky that it becomes a huge pain. 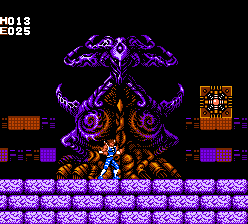 There are more issues, too. Enemies drop out of the sky and can suddenly appear out of nowhere. Hiryu doesn’t have any invincibility time when getting hit, resulting in many unfortunate deaths. There are a few “boss” fighters outside of the encounters with the Zain machines, but some of them are so quickly disposed of that they pose no real threat.

Still, as it stands, Strider is an incredible action-adventure title. While it’s not everything fans of the arcade game expected it to be, it’s highly recommend for Capcom fans and NES lovers alike.

Beyond the NES release, Strider appeared on the Capcom Classics Mini Mix collection for the Game Boy Advance. It’s just an emulation, with a squished screen and slowed down, glitchy music. 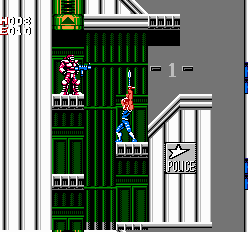 Interestingly, this game was only released in the West and never saw a Japanese release, even though the game had been advertised. In 2014, a prototype of the unreleased Famicom version was found. It is clearly incomplete, as it is substantially glitchier than the (already bug-filled) North American release. There are some minor differences in stage layouts and enemy attack patterns. Text is displayed vertically on the side of the screen, like a manga. The coolest revelation is that the intro has song lyrics displayed at the bottom of the screen. It’s meant to be like a dramatic anime intro.