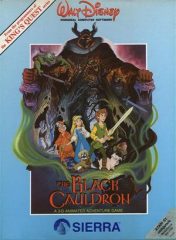 The Black Cauldron seems to be one of the few animated films Disney wants to forget. Based on the Chronicles of Prydain fantasy novels by Lloyd Alexander, it told the story of a young Assistant Pig-Keeper named Taran, a typical peasant with a unique destiny. Unlike many heroes, he is not fated to save the land. Instead, that prophecy is bestowed upon one of his pigs, a cute little porker named Hen Wen. He faithfully takes up this duty and swears to protect the world from the frightening Horned King, who is seeking the Black Cauldron in order to take over the world. Taran is obviously not a born warrior and gets himself into lots of trouble, but like in most fantasy stories, he meets up with a variety of interesting characters to take on evil, including the beautiful Princess Eilonwy and a minstrel named Fflewddur. The film was a box office disappointment, during that dark time in Disney animation before it was revitalized by The Little Mermaid. It’s not a bad film, and if it had been released in the wake of something like the Lord of the Rings trilogy, it probably would have fared better.

At any rate, Sierra developed a computer game based on the movie, employing Al Lowe, who had previously worked on some Disney properties. It looks and feels very much like a King’s Quest game, using the same AGI engine and even featuring a landscape which loops vertically, but it’s a smaller, more focused game. The major landscape is four screens wide by four screens tall, with a handful of other locations familiar to those in the books, like the Witches’ hut and the Horned King’s castle. Based on the number of locations, it’s about half the size of the average King’s Quest title.

That’s not exactly to its detriment, as The Black Cauldron is one of the few Sierra games with branching events and different endings. Taran’s first task is to escort Hen Wen to a fairy village, which is hidden away roughly three screens from your starting point. The sky is filled with monsters who will randomly attack and steal Hen Wen, but unlike the enemies of King’s Quest, this theft does not end the game. Instead, it just means you need to go through some extra steps to rescue her when you reach the Horned King’s castle.

Similarly, there’s a subquest where you can befriend Gurgi, the cute little “munchies and crunchies” monster, by giving him an apple. If you become buddies, he’ll sacrifice himself by jumping into the Black Cauldron at the end of the game, much like the film. If this was any other Sierra game, failing to accomplish this task would’ve resulted in an unwinnable situation, but instead you just have to find another solution. And at the end, when the witches offer you various rewards, you’re supposed to get them to resurrect your little buddy, but you can choose one of the treasures they offer, if you’re a jerk. There are a handful of variations on the end, depending on the actions you took over the course of the quest.

It’s still a fairly compact quest – you need to infiltrate the castle, get the sword (and rescue Hen Wen if necessary), find some magical creatures so you can reach the witches that possess the Black Cauldron, then head back to the castle for the climactic encounter. If you know what you’re doing, you can probably beat it within an hour. You’ll also run into most of the other major characters, but they just hang around for a bit or give you an item, then disappear. 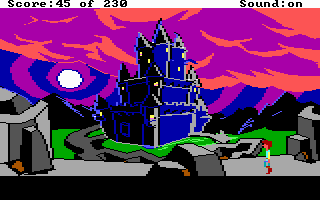 This simplicity was probably intentional though, because the game was obviously developed for kids. In keeping with this, it’s one of the only AGI games outside of Mixed-Up Mother Goose and the Manhunter series which doesn’t use text input. While it otherwise controls like King’s Quest, the actions are handled via the function keys. F3 will bring up the inventory and allow you to equip an item, F4 will use it, and F6 acts as a general “interact” verb. It’s confusing to get these memorized at first, but this bit of user-friendliness is quite uncanny for the game’s era.

The only other holdover from the archaic design mentality is how you deal with your hunger and thirst. There’s an in-game timer which will prompt you to eat or drink something. If you ignore the prompts, soon enough, you’ll keel over dead. Water is easy enough to come by, but food is limited, unless you find the endless food wallet hidden under the bridge. It’s annoying, but it’s easily addressable, so it’s not much of a concern.

Many adventure gamers have dismissed The Black Cauldron as a kid’s game, but the simpler interface, slightly more structured approach, and generally lowered difficulty – even the arcade segments are pretty simple – actually make it more approachable for the modern gamer than most other games of the time. In that way, it may actually best the King’s Quest games, even though it’s not quite as groundbreaking.