With such a well-worn concept, experimentation with the franchise is expected. Perhaps even necessary, considering how many games exist that seemingly only exist to fill a hole in a system’s library. Ideas introduced and often just as quickly discarded, games compared to Armageddon, found wanting, and eventually discarded. Even more so in a world where fast internet has nearly obsoleted the need for Worms’ usual methodical, turn-based stylings. Worms Rumble has moved on from just about everything that the series is known for. That in itself isn’t a crime – rather, that would be its general sense of mediocrity.

Everything one might know about previous games has been jettisoned, even its genre. About the only thing in common with games past are its two-dimensional perspective and focus on killing worms with various firearms. One potential comparison would be to recent multiplayer shooters such as Fortnite, with the large maps and attempted focus on battle royale. In practice, a better comparison would be to the now ancient Soldat, a game well known across high schools and freeware sites of the 2000s. Given how games like Scorched Earth ruled BBSes and computer labs alike during the 90s, perhaps the eventual transition into something that was equally popular in such spaces is only appropriate. 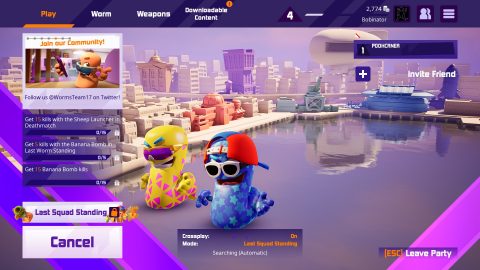 Looking like a mascot for children’s toothpaste isn’t the worst look you could start with.

Rumble is a real-time action shooter in which up to thirty-two players take control of one worm each, trying to score as many kills on each other as they can before the clock runs out. Befitting the real-time nature of the game, the worms are far more mobile than ever before. They can roll, which basically serves as a run, as well as scale high walls by repeatedly jumping at them. Such abilities are governed by a stamina bar that quickly refills when not in use. Less novel, but still just as fresh is that worms now have full air control, as opposed to the strict jump arcs of previous turn-based battles. 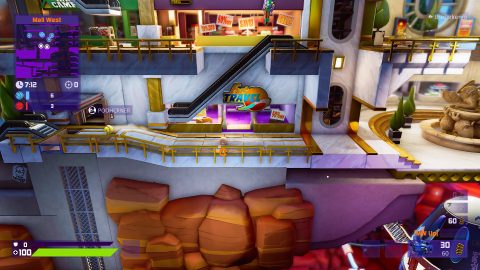 Upon spawning, a worm starts off with one randomly decided weapon and a baseball bat. The bat is decently useful for melee purposes, but also allows a worm to open certain passages where they can only be seen by worms sharing that same space. New weapons and items are either acquired from crates scattered around the map or from downed players, and can be scrolled through at will as the situation requires. Grenades, from standard frag to scattering banana bombs, are thrown with their own button, while utility items like the jetpack and medkit have a separate button as well.

Most of the weapons should be familiar to Worms veterans, even if they don’t function the same way. The assault rifle, hand cannon and bazooka function like you’d expect in any typical shooter, while the shotgun fires out a fan of projectiles that do more damage up close. Among the wackier weapons are things like the plasma cannon, which has to charge before unleashing an energy shot that bounces across various surfaces. Somewhat more tactical is the turret launcher, which lets you place sentries upon any flat surface to help control an area. Perhaps more familiar to Worms fans is the sheep cannon, the projectiles of which go scampering away while you’re free to focus on other things. 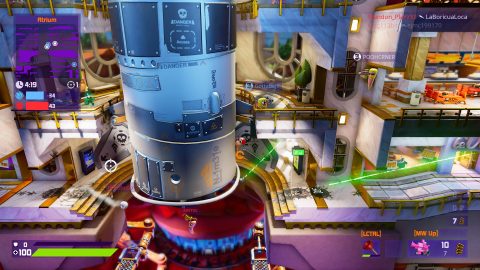 Turrets aren’t as scary as they used to be, but they can still slow down enemy worms.

Unfortunately, all of this makes for a somewhat mixed package. It certainly feels appropriately frantic – movement speeds are often high, and there’s enough options to get around that it never feels like there’s anywhere you can’t go with enough effort. Firefights end quickly, with four or five hits on an enemy usually enough to put a point on your score. Hidden passageways give plenty of places to pop out and launch an ambush, with just as many open areas to put your jetpacks and grappling guns to good work taking out foes.

Only a handful of custom made maps are available for play across the various modes. As opposed to the random smattering of themes of previous games, here they’re somewhat more grounded – such as a bank, or a mall, with the most “out there” of the set being a space station. Despite this, there’s still occasional bits of the old wackiness the game is sorely missing, like the way the mall has an underground supervillain lair beneath it. Each map also has a unique event that occurs once enough time has passed in the match, such as the rocket in said supervillain lair launching, temporarily removing it as an obstacle during play.

The first real flaw with the game perhaps isn’t entirely its own fault, and yet remains fatal all the same – there simply aren’t enough players. While the game can support up to thirty-two worms in one map, often you’ll spend about an entire minute to find a game that has less than half of that. The cruel reality is that the game’s maps are simply too big for such a low number of players, which leads to a lot of points where you’ll simply be wandering around looking for even a single opponent to take out. Many matches are made of long, quiet stretches of keeping an eye out for enemies, broken up by short, deadly firefights. Appropriate for a more realistic, tactical game, certainly, but not for the wacky, frantic fun so advertised by Rumble. 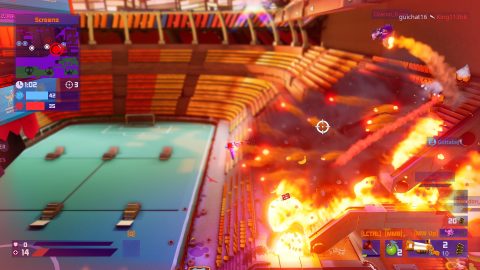 How things generally look once some action happens.

Because of this, this also makes it difficult to find a match in the game’s “Last Worm Standing” mode – the battle royale mode in which each player can only suffer one death before being ejected from the match. Matches are easier to find if you’re playing standard deathmatch, but never one with a full assortment of players. Playing against the AI isn’t an option, either, which only compounds the problem. Many user reviews not long after the game’s release decry the dwindling player base, a problem that doesn’t seem likely to be rectify without a full transition into free to play.

More than that, the game really just seems to lack a certain spark – or perhaps, rather, a soul. When the game is actually going into the sort of chaotic free-for-all it promises, it’s certainly function. However, it’s hard not to think about the many other games it’s aping from, perhaps subconsciously or not. Games that have higher player counts, to be sure, but also don’t feel like they’re trying quite so desperately to stay relevant. About the only thing that really sets the game apart from most other shooters of its kind is its focus on mobility – and even then, it’s hardly the only one of its kind. 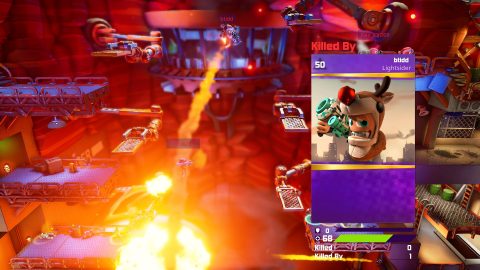 Many of the players you’ll meet are either brand new or max level like this particular person.

The art style has seen another shift, moving once more into the realm of 2.5D. Compared to previous games, the general aesthetic is brighter and more colorful, perhaps even to the point of oversaturation. It definitely looks like it’s trying to follow the trend of more recent shooters, which contributes to the lack of confidence the overall product has. The maps, while lacking the destructibility of previous games, make up for it with a lot of smaller details that are fun to look at, like the various advertisements scattered around the mall map. 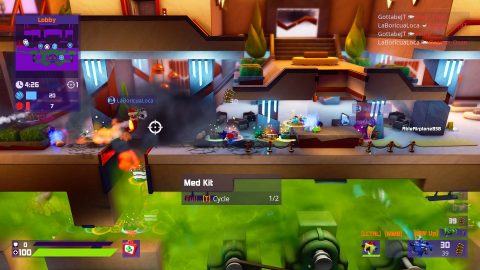 The worms themselves have bigger, more exaggerated features, making them look like something from a forgotten CGI movie, but are least usually visible enough during actual play. Worm customization has still been retained – in typical shooter fashion, playing enough matches earns new cosmetics for worms and weapons alike. Unfortunately, given the game’s faster pace where worms are constantly darting in and out of view, most of these are much harder to appreciate. The voice work also deserves mention – all the worms are far more vocal, given that the lines for every worm and the events that trigger them are now happening all at once. Several of the voice packs quickly become truly obnoxious, particularly when the worms using them take damage.

Overall, a new direction for the series is perhaps to be commended – it would be difficult to say what exactly could be done with the classic formula that hasn’t already been done. Unfortunately, “turn based artillery game” is a genre almost entirely belonging to previous games, Rumble simply has too much competition. The market, it seems, simply has no room for what it’s trying to offer, a lesson learned too late by many games just like it. Perhaps, in time, its tide will shift – or perhaps even more likely, Team 17 will return to more familiar territory.