As an expansion pack for the original game, Reinforcements adds an assortment of new features both subtle and major, and helps serve as a bridging point for later games in the series. While the original Worms served as an interesting curiosity to potential fans, it’s this particular expansion where the game truly resembles what would follow. 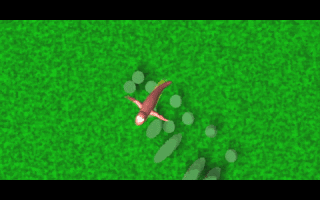 One of the several FMVs, returning from the CD32 version of the original game.

The biggest addition are an assortment of many optional rules tweaks, all of which can make for a game that feels much different. Most notably, you can choose to allow cycling between your worms at will at the beginning of your turn. This has some obvious strategic advantages, from moving a worm about to be in serious trouble out of harm’s way, to using the same worm turn after turn to pull off that perfect move you’ve been planning. There’s no limit to how often you can do this, just whether the option is on or off, so it can make for a very different and potentially much deadlier style of play. Also introduced is “retreat time” – the ability for a worm to move a few seconds after they’ve made an attack to better prepare themselves for retaliation. 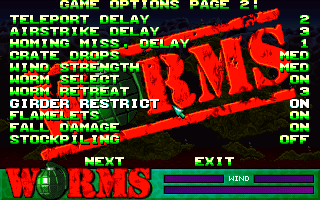 Just some of the options available to customize to your liking.

There’s many more options with which to pick from, which can help make the game far more comfortable to people who entered the series from a later point. How much of a factor would you like the wind to be? Would you like a few seconds to leap away from a mine before it explodes, or have the chance it might turn out to be a dud? How often would you like to see weapon crates fall onto the field, now joined along with crates that restore lost hit points? All these and more, while they don’t lead to a drastically different game, can at least help mix things up if you find the vanilla options growing stale.

Introduced for the first time as well is a single player campaign mode, which helps nicely with the original release’s lack of longevity. It’s not particularly fancy – boiling down to a series of twenty-five battles in which worm placement, weapon selection, and rule set have been pre-determined. There’s also no plot to speak of, just a short block of text between each mission that gives an idea of how hard the upcoming battle will be. Despite this, it adds a sense of progression the game previously lacked, and serves as good test of the skills you’ve likely picked up playing so many matches against the AI. 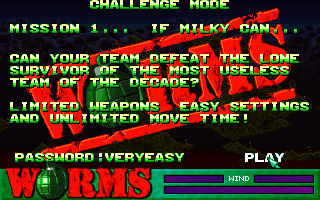 Each map of this mode also features custom-made maps, made up of elaborate images rather than the usual random landmasses. You might fight a battle atop Team 17’s own logo, or fight it out across a small city, complete with a Wormified Statue of Liberty blocking your shots. It’s possible to play these while playing standard matches as well, and should you grow tired of the default, it’s theoretically possibly to create and import your own, as well. The steps and software needed to accomplish this, however, would likely be more difficult to find, nowadays. 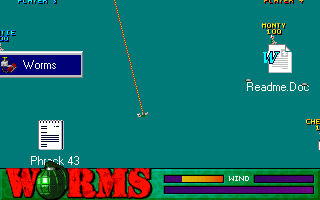 There’s a pun to be made, here.

Another feature that would become to be a well-loved part of later games is that you can now set the “speech bank” of each individual team. Along with the classic British, French, and German options, there’s an assortment of even goofier voices to select from. You can make your worms speak in thick Scottish accents, sound like a bad Blaxploitation film, or make them Elvis impersonators, among other choices. Less noticeable, but still cute, is the ability to change the gravestone an exploded worm leaves behind when they bottom out.

There’s a certain purity in Reinforcements that never entirely followed with later games in the franchise. While it’s true the game misses on many features that later games would, it makes up by having a certain integrity to it later games would lack. While later games would focus upon having sillier weapons with uses that aren’t always obvious, the somewhat more realistic array of firearms here adds somewhat more approachability. For those who prefer that more grounded style of worm warfare, Reinforcements is almost certainly the best way to enjoy it, with plenty of customization and a more than solid gameplay base. Those who’ve entered the franchise from a later point, however, will likely find something or other seems to be missing.

A year later, a combined bundle of the original Worms and Reinforcements would be released as Worms United. This is the version of the original game you’ll now find on the digital stormfronts.