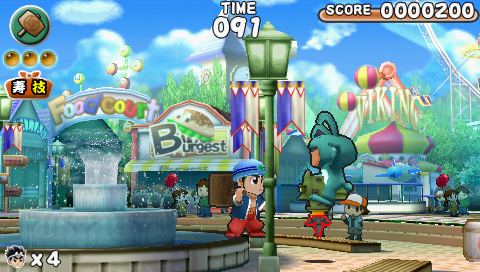 After spending the better part of a decade moonlight as a pachinko mascot, Irem resurrected their old friend for a new outing on the PlayStation Portable. It’s also one of the first games in the series officially released in America, published by Atlus under the name Hammerin’ Hero. This time, it’s a 2.5D side-scroller with a more cutesy, cartoony feel than the previous games. You play as Gen through twelve stages, which include the usual Japanese suburbs, a carnival, a TV station, a haunted hospital, a beach, and an office building, before finally jumping into a ship that suspiciously looks like an R-9 from R-Type (and can also transform into a mech wielding a giant hammer) for a climatic battle in space.

The levels are generally pretty short, but each is loaded with character. The game keeps a running tally of all of the different items, people, and bonuses you find throughout each stage, unlocking their description in the menu, and advises you of your progress. Since it’s a relatively short action game – it can be beaten within an hour or two – it helps add a bit of replay value, to ensure that you’ve combed every bit of every level. By default, you can only take a single hit, like the original arcade game, but you can also play each stage in Easy mode, which lets you take three hits. Also, anything that can damage you is outlined in red, making it easier to pick out dangerous projectiles.

Throughout each stage, you can find various citizens with little “anger” balloons floating above them. If you knock these out of they way, they’ll come out of their stupor and begin helping you. Gen’s arsenal has also been vastly expanded. In his default uniform, he wields his hammer, with two types of swings with various powers, and a special move executed by jumping and hitting down and Triangle.

As you progress through the game, you can unlock different “jobs”, each of which gives Gen a different set of weapons and skills. As a baseball player, you’re obviously armed with a baseball bat. As a DJ, you can toss records and swipe at foes with a gigantic boom box. In one stage, you’re required to don a swimsuit to swim underwater. In the second-to-last-stage, you can disguise yourself as a dark suit/sunglasses clad businessman (thug?) to infiltrate the enemy’s headquarters. At the beginning of each stage, your lady pal Kanna will offer to cook a meal for you, which can be used at any time during the stage, Depending on what you’ve unlocked, these can restore your health or let you change into another job in the middle of the action.

This is by far the most ambitious, most inspired entry in the series, but there’s one major problem – the action itself is slow and sluggish. Compared to the blazing fast pace of the arcade games – or even the slower pace of the Game Boy titles – Hammerin’ Hero feels remarkably sluggish. It doesn’t help that it’s also filled with tons of slowdown. It doesn’t ruin the game, but it does keep it from nesting alongside other high-quality PSP sidescrollers like Dracula X Chronicles, Mega Man: Maverick Hunter X, and Prinny. 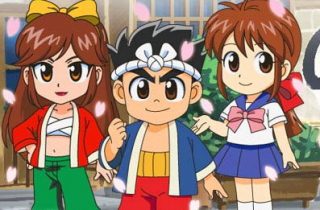 Around the time of the PSP game release, an anime based on the series, simply titled Ikuze! Gen-san, was broadcast on the online site GyaO. The whole series consists of 12 episodes, each 9 minutes in length, and focusing on many of the characters in the PSP game, including Gen, his lady friend Kanna, the red haired guy Dan (who originated in the second Famicom game), and various other members of the Kuromaku Industries folk. A DVD compiling the episodes was released in April 2009.

The Japanese sure do love their pachinko! For those not in the know, pachinko is kind of a mixture of pinball, except there’s no flippers to use, so you just shoot tons of tiny little balls through a board and see where they land. It’s more about luck than actual skill, though, so it’s much closer to gambling, except it’s actually legal in Japan. After the last portable games, Gen gained quite a bit of popularity as a pachinko mascot for Sanyo Bussan Co.