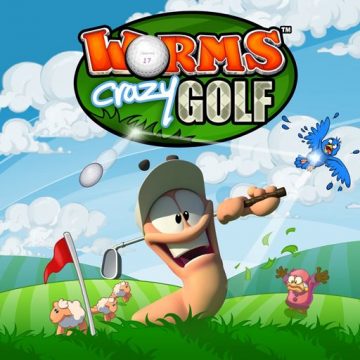 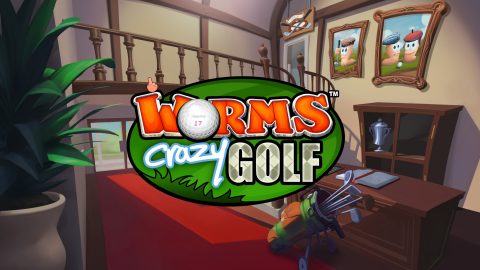 With Worms as a series so often being about reiterating and improving on the same basic mechanics, the times when it breaks out of that mold are often particularly refreshing. Although they’re not always gold, such in the case of Worms Blast, it’s always good to see the franchise try something new just for variety’s sake. Such is the case with Crazy Golf – far from brilliant, but an entertaining spinoff that makes use of the series “aim, launch and fire” in a unique new way. It’s actually somewhat of a remake of several games released in the past for Java phones, with far more mechanics to make use of and content to play through. With that in mind, it’s a little simplistic, and makes for what’s generally a very light and fluffy, “pick up and play” game – not that such things are unappreciated.

Crazy Golf is more of a puzzle game with golf trappings than a true example of the sport, meaning that any experience with a traditional golf game is unlikely to be of any help. It all starts off with the swing – take aim using the trajectory guide the game offers, hold down the button to build power, (or, optionally, press the swing button, wait, and then press it again) and then release. Release just before the red zone on the meter to achieve the expected trajectory, or hit the sweet spot just inbetween the red zones for an “overdrive” shot, sending the ball much higher and further. Just don’t hit the red zones, or else you’ll screw up your swing and waste a precious shot. 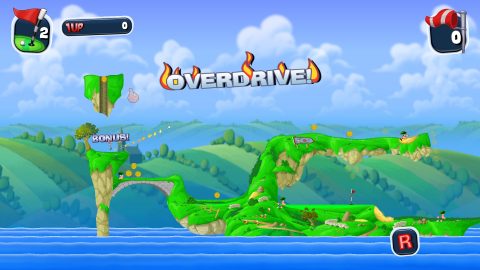 Thankfully, your worm will automatically teleport to the ball between shots, preventing you from having to navigate the course yourself and risk getting blown up. Instead, it’s your ball you’ll have to be concerned about as it navigates the various hazards you’ll come across. You’ll constantly run into the usual golf concerns, such as water hazards, sand traps, and the occasional wandering animal. The further you get, however, the more surreal the courses themselves become, however. From the first handful of holes you’ll be encountering things like floating chunks of land, underground tunnels, and ramps your ball can roll upwards and downwards. 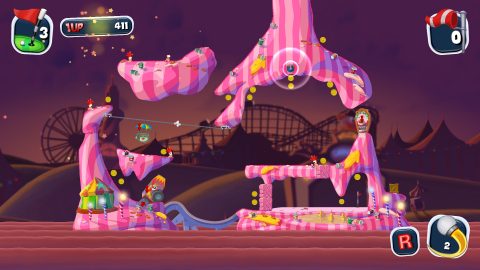 It wouldn’t be a very Worms-like experience if the geometry was your only concern, however. Many courses are littered with things that explode if they’re struck, such as explosive barrels, land mines, animals, or other worms just trying to do the groundskeeping. These explosions can both push your ball off of its path or blow open new routes to the cup. Often more vexing are things like magnets, which can push and pull your ball off its projected course unless you find and the switch that controls them. Others are somewhat more helpful – trams that can carry your ball from place to place, teleports, and cannons that can be angled to launch the ball further. If you use all of these things together just right, you can carry your ball incredible distances with just a single shot, and this often becomes necessary to make par. 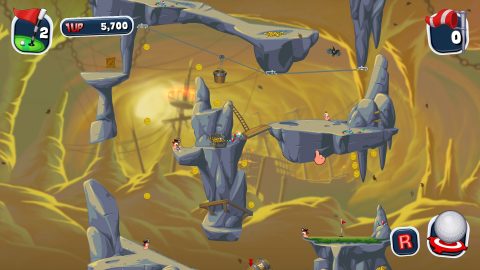 You’re also given several tools to make use of on your quest for the trophy, all of which you’ll need to call upon sooner or later. You have a selection of different clubs to pick from, each with their own trajectory to keep in mind as you take a swing. As you play, you’ll also unlock special abilities that can be applied to your ball, with each one only have a limited amount of usage per hole. You can make the ball far more elastic, blast it upwards for extra height, or slow time for tricky shots, among other tricks. You also have an unlimited supply of ‘ball control’, allowing you to add a subtle amount of spin while it’s in the air to help the ball get just a little bit closer to where you want it go.

What a lot of the game boils down to is a lot of trial and error – trying to find just the right angles, power level, and timing to get the ball from start to cup. One good shot might ruin your whole chance at clearing the hole, forcing you to start again and again until you get it right. Thankfully, the whole experience isn’t nearly as frustrating as it could be, thanks to a suite of quality of life features that a game like this truly needs. You’re free to retry and restart a hole as often as you’d like, as well as return to any hole you’ve previously cleared. The tougher holes will take a lot of repetition to get them just right, but the time between a reset and game time is thankfully short enough it’s never too annoying. 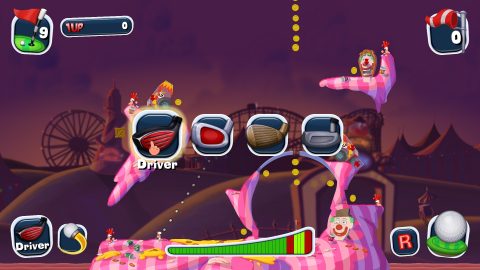 It’s not too tough to pick the right club — just look at the dotted line and see if it looks right.

On each of the four courses on offer, there are eighteen different holes to putt your way through, each of which offers several goals to accomplish. Making par is of course, the most important, as it’s the only way you’ll progress onwards to the next hole. Each course also contains twenty coins and a hidden crate, collecting each of which will mark off two more bonus objectives. Finally, along with your traditional golf score, the game also keeps a more traditionally video game-esque scoring system. Good swings, big airtime, sinking the ball below par, and causing destruction will add to your score, and high enough scores will check off a final objective.

In a very welcome decision, you don’t actually have to accomplish each goal in a single run. If you manage to achieve one of the bonus objectives, you don’t actually have to make par for it to count as completed. You don’t even have to gather all the hidden coins in a single run, which means you can focus on clearing a hole in the most efficient manner before you go all out on earning full completion. Trying to get full completion is far harder than most of the holes are on their own, as the coins and crates are often placed so out of the way it might take dozens of swings to figure out how to reach some of them. Completing any objective will earn you coins, which you can eventually put towards customization items for your worm, as well as different clubs that offer varying stats between them. 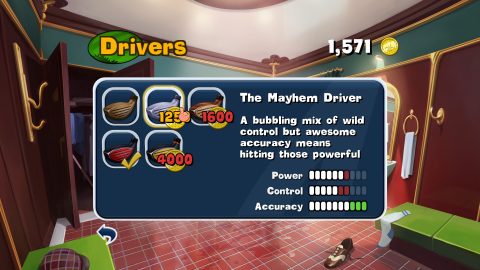 Occasionally, the game will break up the usual style with certain optional challenges, completing which will earn you extra coins. These challenge your golfing abilities in different ways than usual, such as asking you to a hit a series of increasingly tougher targets, keeping the ball airborne as long as possible, or getting on the green from progressively trickier positions. These are generally fairly tougher to reach the target score on, but they don’t extract too much from what’s a generally laid back experience. The regular holes, can often be cleared In a handful of attempts, with some passing by in only a swing or two if you ignore the other objectives. 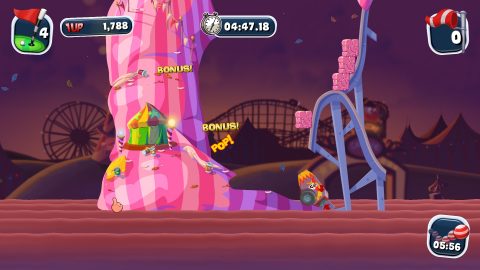 One of the bonus challenges on offer — how quickly can you pop all the balloons?

Overall, you’ll generally see about everything the game has to offer in terms of new obstacles fairly early on, with every hole being more challenging combinations of such. As befitting the game’s mobile origins, it’s a game best played in short bursts, lest repetition start to strike in. While the game is part of a deluge of physics based puzzle games that appeared on phones and tablets, its golf stylings do a lot to help set it apart. It’s also one of the rare Worms games that’s perhaps better at being a single player game. While the option for multiplayer exists, turning the game into a somewhat more traditional golf game, it detracts somewhat from the game’s laid-back nature.

Overall, if you can find the game for reasonably cheap, and you don’t mind a game that requires a little repetition, Crazy Golf makes for a fine spinoff. As a bonus, it also breaks up several dull releases before a game that will try and shake up the usual Worms gameplay to mixed results.