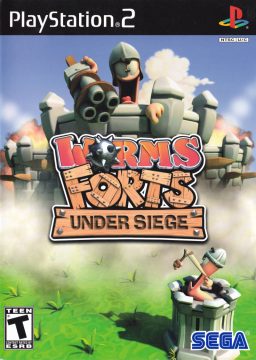 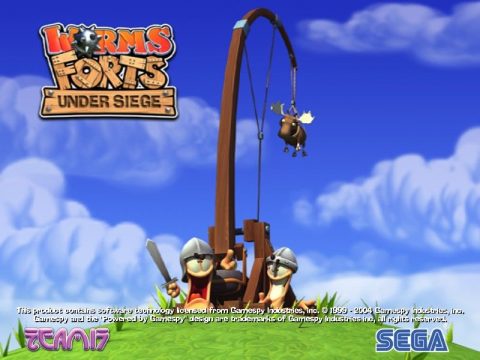 It’s somewhat frustrating to talk about Forts for too long, as it’s more or less a promising idea that simply just didn’t work in practice. It never was entirely clear why Forts diverges from the usual formula quite so much. Perhaps Team 17 felt like Worms 3D wasn’t quite what fans were looking for, or perhaps it was another attempt at keeping the series fresh. Whatever the case, for several reasons, It doesn’t really work. And that’s especially sad, since it’s the most the series will break from its usual fare for quite some time.

Forts isn’t to be confused with the mode of the same name seen in previous Worms games. Instead, it’s all about a concept previously unknown to the series – building a base, defending it from attackers, and destroying the structures of all your foes. While play still follows the direct control of one worm at a time, play transferring from team to team, how you actually battle your opponents is far different. With the flat, mostly featureless terrain, new weapons on offer, and the long distances between each team’s origin point, going for direct combat with the enemy makes for a very poor choice. Forts takes more after the old games that inspired it, in that the smartest thing to do is generally stay where you are, launch long distance attacks, and try and get closer and closer to landing a direct hit. 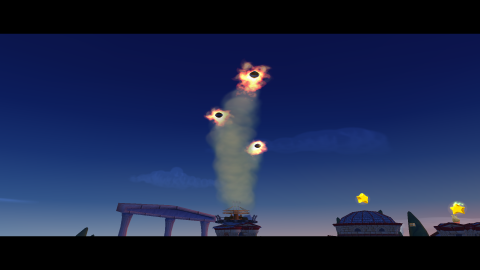 Each turn, aside from firing off a weapon, your worm is capable of placing a structure on one of the various construction points scattered around the field. Whatever you place down, however, has to be placed next to your ‘stronghold’ or be part of a chain leading up to it. Your stronghold is the most important building of all – if it’s ever destroyed, you’re out of the game, no matter how many worms you have left. You’ll also want to be on the lookout for “victory locations” – construction points marked with a star. With each building you place upon one, you get access to new and more powerful structures. Capture five and you’ll be able to build a Wonder, giving the other teams only two turns to destroy it before you instantly win the match. 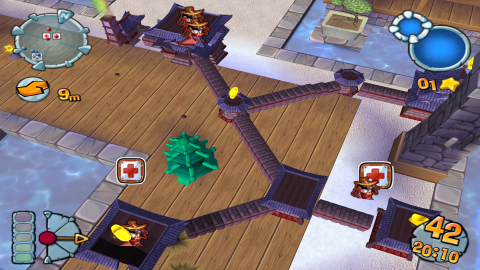 What a fort usually looks like, several turns in.

The most common type of building you’ll place are towers and their various upgraded forms. Placing a worm atop one of these will give you access to siege weapons, with the more powerful ones being restricted to better types of towers. While you have a handful of weapons you can fire off without being atop a tower, if you want to do any appreciable damage to enemy structures, a siege weapon is more or less a necessity. Unfortunately, it’s this reliance on siege weaponry that’s the greatest weakness. While it’s far from unplayable, it requires so much time and effort to get comfortable with that Forts loses almost all the instant playability previous games in the series offered. 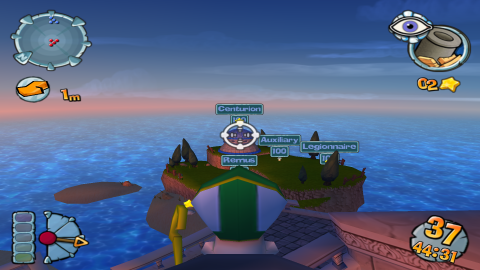 This is about the most help you’re going to get.

Trying to accurately aim weapons in Worms 3D was a difficult experience for several reasons, and it’s only gotten worse here. The distances between forts are so long that you’ll spent shot after shot trying to line up the exact power and angle of your projectile, only to watch go sailing far overhead your target and into the water below. It feels like you have to be some manner of rocket scientist if you want any hopes of landing consistent damage, especially once wind factors into the equation. In fairness, there are some other weapon types in which this problem is somewhat mitigated, such as miniguns and ballistas that fire directly upon their targets. Unfortunately, without even some sort of guide to land your shots, it’s not much easier to do any real damage without a lot of perservance and a little luck.

There are other buildings you can unlock and place onto the field that offer their own advantages, as well. The science lab will boost the damage of all your weapons, assuming you can land a hit with any of them, while weapons factories constantly spawn weapon crates you can pick up. Some thought needs to be placed on where exactly your buildings will go, as losing a building not only removes access to it, but any structure that comes after its place on the chain. It does, at the very least, make an interesting twist in the usual Worms gameplay. In previous games, unless you got especially lucky with the crates you’d find, there wasn’t really much of a feeling of building in power — rather the opposite, as your ammo supply dwindled. Here, if you manage to protect your buildings well, you can definitely feel like you’re doing better than when you started. 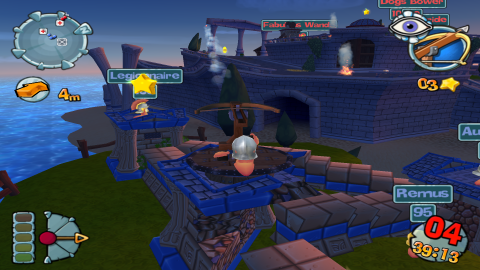 The game’s big problem is that until you manage to figure out exactly how aiming works, it tends to drag on for far too long. In the 2D games, even if you missed, it was highly likely that your shot would take out a chunk of land and give you a little bit of progress towards your goal. Here, there’s so much water around you that missing leads to nothing more than a waste of your turn and ammunition. Destructibility has also been removed, aside from whatever damage you can land on your enemy’s structures, removing the element where you could slowly chip away room for other worms to move around. Even a single turn takes far longer to complete, since you have to spend time placing down buildings, leading to a games where matches seem to be agonizingly long. 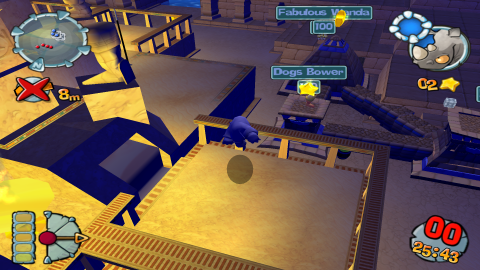 This is what you can expect from most of your shots.

There’s a somewhat expanded campaign mode, featuring four short storylines spread across points in ancient history. Each of the four themes, set in Egypt, Greece, China, and Arthurian England, has a small FMV cutscene introducing it, which are least somewhat amusing. Each mission also begins with an in-engine cutscene, mostly made up of camera shots of the various locations and reused animations from the Worms. None of the stories on offer are exactly deep or thrilling, but they’re goofy enough that they fit in well with the series’ usual brand of humor. Unfortunately, playing through the story mode still requires playing through the game itself. 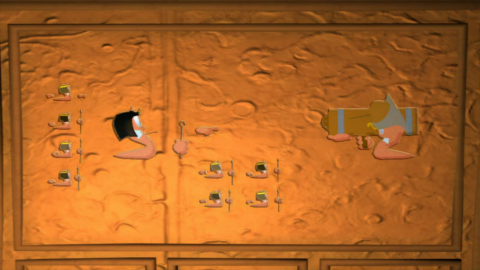 Perhaps for those who invest enough time into it, Forts will suddenly ‘click’. It’s a decent idea, and certainly one that gives the series something new to work with. The combination of a three-dimensional perspective and the long, wide open spaces between players, however, are the game’s fatal flaw. It’s a shame the concept wasn’t refined or somehow reconfigured to take place in the series’ traditionally 2D world, as there’s a glimmer of something interesting there. Unfortunately, middling reviews meant the series would, for better or worse, stick with what worked.