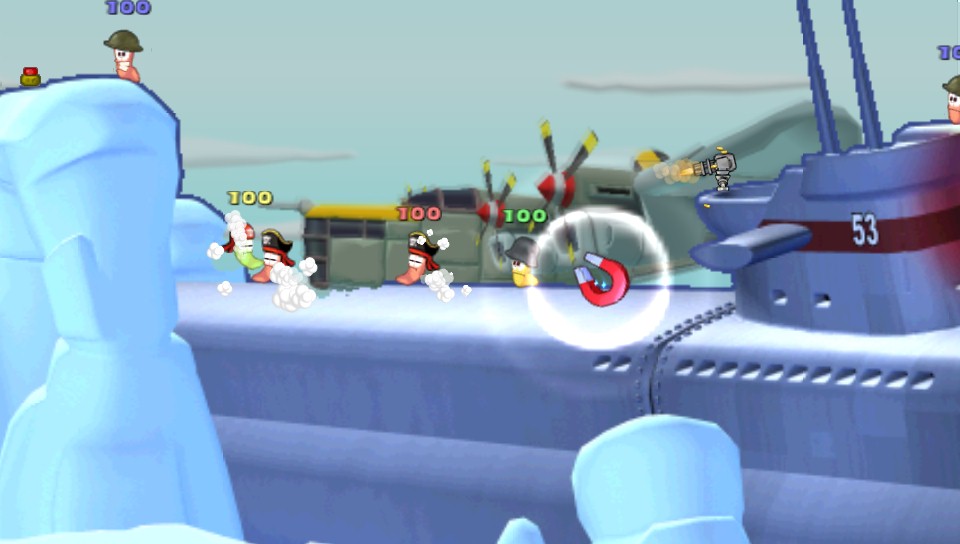 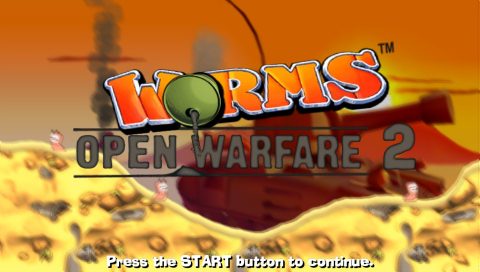 With about a year and a half between the two games, it’s still surprising how much of an improvement Open Warfare 2 is after the somewhat disappointing original game. Combining the solid, if not perfect core of the previous game with much more content, it wouldn’t have been unfair to call it the best the series could get on a handheld for quite some time. While options for handheld Worms games have certainly improved, this one would be far from your worst option if you have friends to pass your handheld around with. Even if you don’t, a healthy amount of single player content makes up for the usual imperfections and lack of smaller dials that the early games had on offer.

While many of the weapons are carried directly from the previous game, there’s an assortment of new things to use against your foes. The sentry gun returns from Mayhem, now blasting at any worms that it catches moving in its presence. These can be exceptionally good at pinning worms down, as they’ll activate at even the slightest hint of movement. While they can be destroyed with enough damage, even turning to face one can be a costly mistake. In many cases, your best hope in these situations is that there’s another worm out of its range who can save you from getting more or less immobilized by their threat. Thankfully, the frustrations unaligned sentries can be bring can be toggled much in the way barrels and mines can.

Electromagnets are also pretty fun to use, if far more situational in their use. While they only remain active for a few turns, they’ll either repel or attract magnetic objects like grenades and bazooka shells, thus making targets easier or tougher to hit. While both sentries and magnets can be placed upon the terrain by your own team, there’s the usual assortment of new weapons to use as well. The lightning strike makes for an extremely versatile tool, damaging worms underneath its cloud, turning sentry guns against their creators, and most valuable of all, bringing a worm back from the dead. The boomerang only gives worms a light shove, but is great for grabbing long range crates with the chance of getting your ammo back. 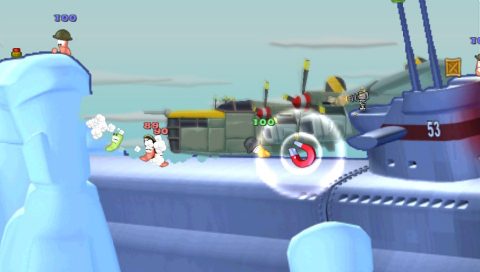 It’s always a smart idea to take out sentry guns before they do the same to you first.

The environments now play somewhat of a larger role than before in a variety of ways. Each type of environment also has a random event that can occur, like wormholes that alter a projectile’s trajectory, or clouds of flak that obscure parts of the battlefield. Some however, can be far more dangerous, like an earthquake that sends all the crates, mines, and sentries juttering throughout the battlefield, possibly placing them just where you’d like them least. 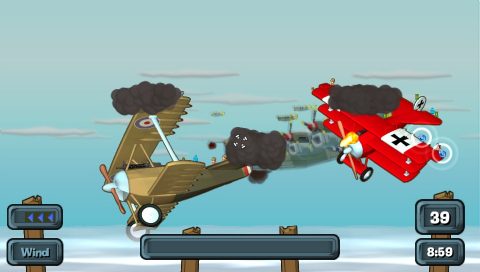 There’s an assortment of single player content to work your way through, starting with the campaign mode. The majority of these mode are deathmatch missions in which you’re placed on a pre-selected layout, working under the limits of a pre-chosen arsenal. Every so often, these are broken up with “boss” missions, which task you to kill one particular worm — often at the end of a gauntlet of obstacles. These missions in particular are often the most interesting, since they give the game more of a puzzle focus. There isn’t much of a plot this time around, although the cutscenes serve as very brief transitions from each time period that make up the landscapes.

Also included is the Puzzle mode, in which you’re tasked to find a way to destroy your enemies with a very limited arsenal. It makes for a good test of how much of your Worms knowledge you’ve retained since the days of 2D, often dealing with conditions like wind, magnets, or hazards to navigate. The Time Attack mode instead gives you a course to navigate with a certain tool, recording your best times for posterity. It makes for a surprising amount of content to work your way through, even if you don’t have any friends nearby to play the game with. 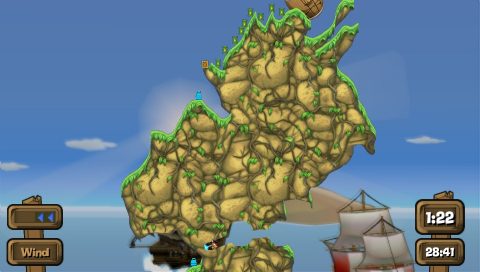 There are rare times when the campaign mode isn’t always about killing everybody, like when you’re tasked with scaling this landscape to destroy the barrels at the top.

The multiplayer has also been expanded to the standards one would expect from a Worms game. Unfortunately, many of the services that were introduced has passed along with the game’s servers, like internet play and the ability to create clans. Along with the ‘Forts’ mode previously seen in Armageddon, new to an unmodified Worms game is ‘Rope Race’. Here, teams of one worm swing their way through a number of different courses to reach the exit first. While this idea is neat in theory, sadly, it’s somewhat missing something without the quirky physics Armageddon offered once you learned complete rope mastery. 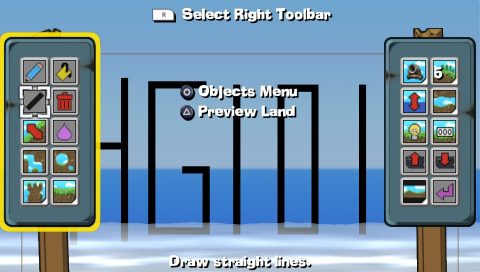 The DS version was outsourced this time around to developer Two Tribes, and while it has its differences, it’s thankfully much more in line with the PSP release. The graphics, while still not as high of a resolution of the PSP release, are far more legible. The controls, thankfully, no longer require a stylus to use, instead having you hold a button to move the camera, with another button to access your weapons. The physics, while serviceable, have a somewhat different feel to them, with worms feeling like they don’t quite have the weight and friction of their PSP counterparts. In some ways, it feels a little closer to the classic games, although there’s just enough of a difference that it still doesn’t feel entirely the same. 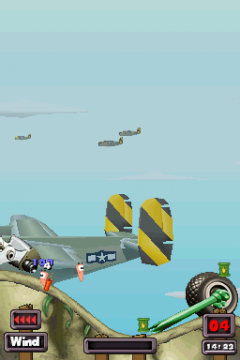 This version also features an exclusive ‘Laboratory’ mode, a single player set of puzzles that use the DS’s unique capabilities in different ways. One set has you tap the screen, creating explosions that launch a worm around the landscape towards an exit. Another has you blow into the provided microphone to provide lift to a parachuting worm, avoiding obstacles on your path to the end. Another lets you draw ground with the stylus to keep your worm safe on its way to the exit. While none of these are quite substantial enough to make the DS version superior, they’re decent time wasters that give the game a little more value when away from other players. The game also offers stylus functionality for the landscape editor and flag editors, giving you somewhat finer control for whatever you create with them. 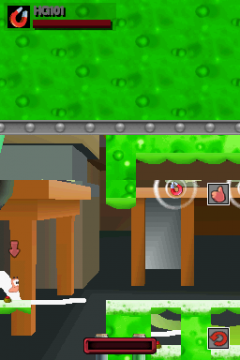 The ‘Draw’ section of the Nintendo DS’s Laboratory mode.