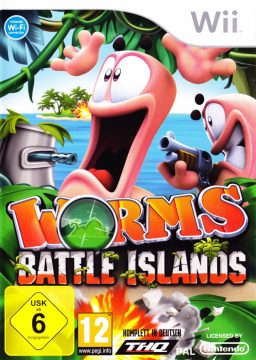 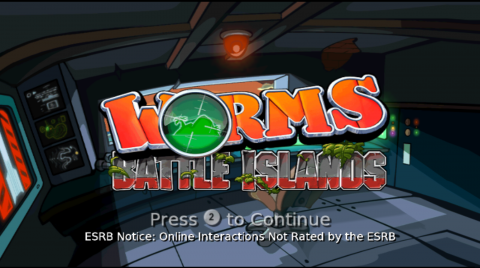 An entirely forgettable release, it’s difficult to determine exactly who Battle Islands is for. The game apparently started life on both its PSP and Wii releases and a downloadable title, which would certainly explain what feels like a critical lack of budget. On Nintendo’s system, however, it saw release on shelves, making it stand out even more in terms of just how cut down it is compared to previous releases. While the game did attempt some new things with its multiplayer mechanics, the death of the online capabilities of both systems leaves nothing but a pared down version of Open Warfare 2 with little else to recommend it.

The weapon set is just about the same as you’d encounter in that game, with the only new addition to your arsenal being the EMP Grenade and the Flare. Rather situational tools, the grenade disables hazards like mines, magnets and sentry guns, while the flare will have the next crate that comes down to Earth hit wherever you place it. The motion controls carry over from A Space Oddity, switching to the default controls for any item that didn’t have an equivalent in that game. You can also add in a Nunchuk, or, thankfully, ditch the motion controls entirely for a more traditional experience. 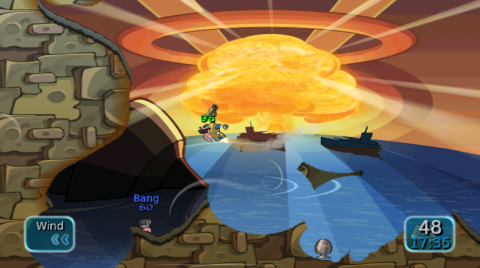 The biggest new addition to the game is the “Tactics” multiplayer mode, where every player is sent to a “war room” before the start of the round. Here, you can make use of different abilities that will benefit the player that used them, with each use using up a stock that isn’t replenished between turns. You can ‘snipe’ a worm for free damage, place down clouds of vision-obscuring smoke, parachute worms onto the field wherever you’d like, or increase your chances of taking the first turn, amongst other options. Once every player has used up their time in the war room, the items are used on the field, and then play begins normally. 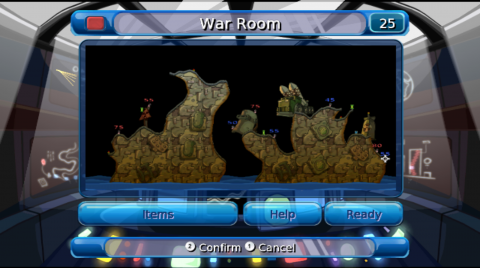 Place your sniper here before the match begins… 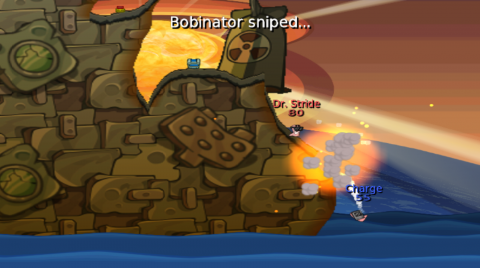 And this worm here will take some nifty free damage for it.

It’s a neat idea in writing, but unfortunately, it doesn’t work quite so well in practice. For one thing, if you’re playing with humans, most of the items are best used if you can trust your friend won’t take a peek at your screen – not always a sure thing. Other than that, a few of the items are more than a little underwhelming. Getting an extra weapon at the start of the round is nice, but isn’t likely to be the strategic masterstroke that’ll win you the match. Worse than that, you can’t actually get all the different kinds of items without playing the online multiplayer – which no longer functions. Oops. 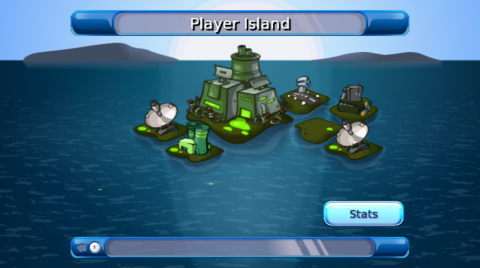 This screen allows you to see what items you can make use of — in a very cluttered, not very clear way.

You can also make custom weaponry in projectile, grenade, air strike or melee forms, something previously seen in Mayhem. You’re given a few different stats to tweak, with more powerful weapons getting less uses per round. Unfortunately, it’s still not much more than a gimmick, since your options are so limited it’s unlikely you’ll make anything better than what the game offers you by default. At best, you’re basically giving yourself extra ammo for your preferred weapon. Much like the rest of the game, it makes for something that feels rather half-baked. 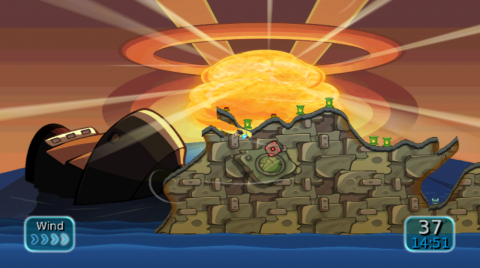 There’s also the traditional single player mode, with the usual mix of deatmatch battles and puzzle missions, this time without any cutscenes to reward you for your effort. It wraps up what’s a fairly weak package overall, one where its best feature can no longer even be used. Battle Islands feels like a stopgap title at best, one made to make sure the money keeps on flowing, and it’s easily skippable. About the only real value it offers is a much easier to play Worms title for the Wii, should you ever be in great need of one. If you’re more of a PSP kind of person, however, Open Warfare 2 remains a superior option. Both options are very similar, aside from the Wii version offering optional motion controls.