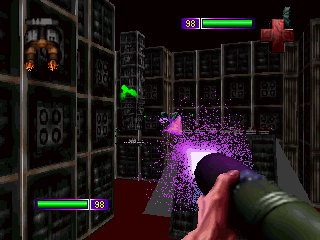 You’re stranded in space, your buddies are dead, and those alien buttheads have ruined your souffle. What’s a space cook to do? 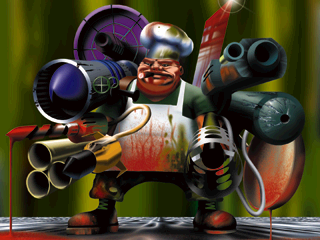 PO’ed is a first-person shooter originally produced for the 3DO Multiplayer System (and later ported to the Sony PlayStation) in 1995 by the now-defunct Any Channel, a small garage band of game developers headed by Brian Yen. It can be best describe as an interactive fever dream: every single thing about the game is awesomely surreal. The levels are comprised of geometric shapes placed at odd angles, with textures that almost resemble something familiar, but not quite. The soundtrack is mostly silence and unnerving ambiance. The monsters are the very definition of strange, from their outrageous designs to their erratic movements. It is difficult to find a video game that provides a more bizarre, otherworldly experience: this game feels like it was made in an alternate dimension. 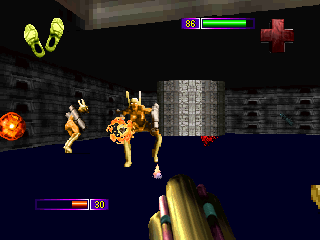 You play Ox, the gruff cook stationed aboard the military starship U.S.S. Pompous, which has been captured by an unidentified coalition of villainous alien beasties. Ox’s goal is simple, in theory: locate the exit teleporter and walk into it. This task is complicated by sprawling 3D mazes that require a jetpack to fully explore, and endless hordes of ugly aliens that often teleport into your immediate vicinity when a switch is flipped or a tripwire triggered. Fortunately you have an arsenal of ten insane weapons at your disposal, starting with your trusty frying pan.

Even the names for the difficulty settings are mad. I Like To Watch is the easy setting: monsters are pathetically weak, auto-aim is generous, and the jetpack has an unlimited fuel supply. If you choose I’m Over 30, I Have Arthritis In My Fingers – AKA the normal difficulty – you’re already asking for a rough time, as auto-aim is remarkably less forgiving and monsters start leading you with their shots. Choose I Don’t Eat Quiche only if you’re looking for a balls-bustingly hard time, and only if you’re an obsessive-compulsive state-saver. 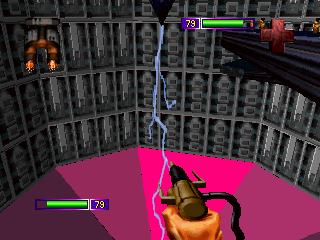 The game is split into three episodes, as designated by the color-coded teleporters in the last room of the U.S.S. Pompous. The starship acts as a hub of sorts, though level progression is otherwise linear. In Episode 1, you’re searching for the green teleporter and weak organic critters comprise your main opposition. After completing the Power Plant level, you begin Episode 2 (signified by the yellow teleporter), where robotic critters become more common. Clearing the Rapa Nui level brings you to the third and final episode (red teleporter), which is packed to bursting with armies of tough, robotic beasties.

The HUD is pretty straightforward, for the most part: the upper-right bar indicates Ox’s remaining health, and the lower-left bar his ammunition for the selected weapon. The weapon select screen displays your available arsenal, and how much ammo you have for each gun. But accessing the weapon menu does not pause the game, so it must be used carefully. Finally, in the upper-left corner, Ox’s current travel mode is shown: either Foot Mode or Jetpack Mode, both of which can be toggled between Normal and Turbo. In Foot Mode, Ox can run and turn with hasty abandon, and even does backflips to turn his guns on cowardly back-shooters. The real fun is in Jetpack Mode, which allows you to soar anywhere on a given map and rain deadly ordnance onto the heads of your enemies. 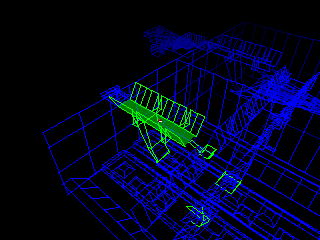 If you become lost in the weird alien worlds of PO’ed, you can access a 3D map that displays your surroundings in a mesh of blue and green vectors. The map can be rotated, zoomed, and brightened or darkened to help you orient yourself. On some levels (Puzzle, for example) the map is invaluable; some levels are made up of such complex shapes that the map is difficult to read. Yet others are so simple that a map isn’t required at all.

The biggest draw of PO’ed is its arsenal: ten of the zaniest weapons a gamer ever saw; the Frying Pan, which becomes deadlier the more damage you take (and the more PO’ed you get!); the Meat Seeker, which fires “meat balls” that bounce off walls, around corners, and down the throats of unwary beasties; the Drill, which gnaws into monsters’ flesh and spatters the screen with gore (until Ox wipes it off, in a humorous touch); the Missile-Cam, which fires manually-steered megaton missiles. Most coveted of all is the elusive Pulse Gun, which washes monsters out off your path like a garden hose washes dirt from a windshield. 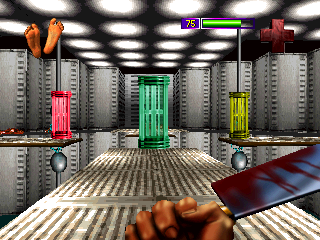 But even with an amazing assortment of guns and travel modes at your disposal, PO’ed is treacherous to explore. Every level is infested with the weirdest creatures to grace a screenshot: walking butts, rock-throwing giants, flying robots, invisible demons, and noxious blobs that split in two every time you shoot them!

The levels pose a major threat to your well-being, too. Whether activated by switch, touch or automatically, every level features moving parts that can get in your way, drop you into pits, crush you to a pulp, or launch you into painful spikes. Sometimes traps are activated by grabbing specific items, entering a certain area, killing a certain monster, or pressing the wrong switch. The most common result is a monster ambush: new foes teleport into your immediate area and mount a merciless assault from all sides (listen for the telltale “poof” of a teleporting creature). Floors that are flashing or appear otherwise liquid are more than likely going to hurt you to the touch, so find the jetpack ASAP, and keep it primed for emergency liftoff if you start taking damage out of nowhere. Just remember, if a level object looks harmful, it probably is! Save often just in case – Ox gets ten amazing guns, but only one life. 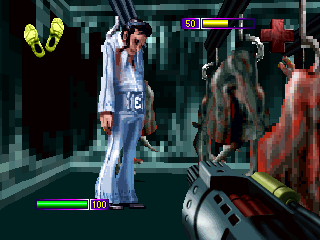 Not everything in a given level is out to kill you, though. Besides the obligatory health and ammo power-ups, you can also find Extenders that increase your health and ammo capacity, and Infinite Stations that perpetually generate health, energy, and jetpack fuel. Floating switch boxes will open doors when you shoot them, and elevators carry you from one floor to another (sometimes complete with elevator musik). The green, yellow, and red teleporters are of course your salvation from the current monster infestation, but others can carry you between rooms on a single map, often revealing secret areas filled with weapons and ammo. These teleporters can look like anything. Most commonly it’s a pillar of purple light or wall-mounted star gate, but they can even look like Elvis (no, that’s not a joke).

Before PO’ed’s original 3DO release, a one-level demo was featured on the third 3DO sampler disk: some of the sounds were different, and the only available weapons were the rocket launcher and a generic laser gun that shot plain yellow beams. In 1996 the game was tweaked and refined for a PlayStation release: In this port, enemies are more aggressive and less likely to wander off your scent; each map is punctuated with a newfangled intermission screen, which displays your kill count, completion time, and a password for the next level (just in case you were too cheap to shell out for that memory card); the menus are more handsome to look at, and feel less thrown-together; and there’s a new Boot Camp map for new players to practice on (which is highly recommended). PO’ed runs much smoother on PlayStation hardware, too, but at the cost of longer load times. And let’s not forget the PlayStation’s ten-button controller versus the 3DO’s seven buttons: the controls for PO’ed are complex and need all the buttons they can get. The PlayStation port is superior to the original in almost any respect, but the 3DO version still looks better on modern TV’s, due to the console’s brilliant graphics interpolation (why, yes, there are good things to say about the 3DO!). 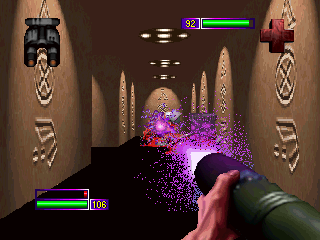 PO’ed is a forgotten gem from the 32-bit console era, opting for a bizarre sense of humor instead of jumping on the rickety FMV bandwagon of the era. People who play it today have mixed reactions, ranging from horrified wonder to annoyed distaste. Many gaming magazines of the period gave it above-average ratings for its jetpack mechanics, fully 3D environments, and general strangeness. Any Channel has long since gone under, leaving PO’ed as its only real legacy – a legacy filled with walking butts, ninja-flipping chefs, and voyeur missiles. It’s a black sheep of nineties gaming that was probably destined to be a one-shot rather than a franchise, but one can’t help wondering where it could have gone had it been a smash hit. In the end, maybe it just takes a very weird person to appreciate it.