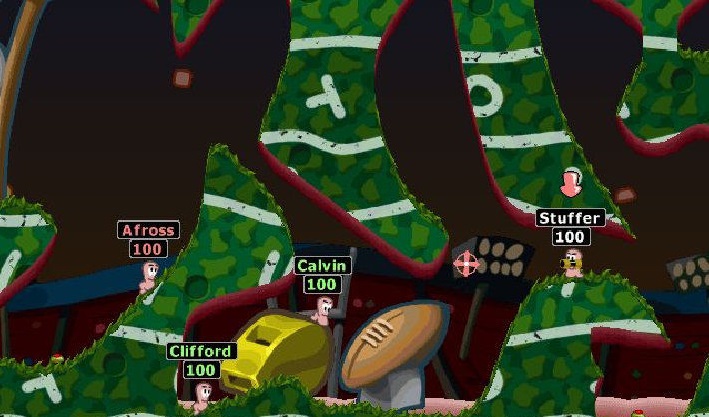 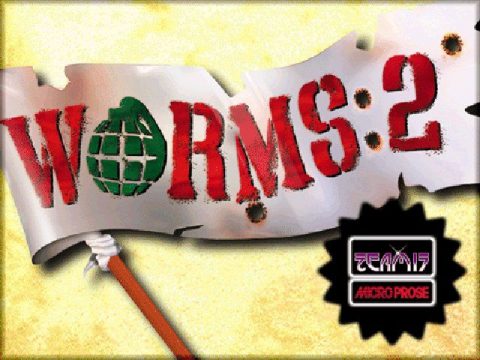 While the computer that spawned it didn’t, Worms managed to survive, thanks to a multitude of ports and the strength of the game’s concept. A sequel would be no surprise to anybody, nor would its new place with the new leader of computers – Windows. The first of many sequels in the series doesn’t do a lot to shake up what’s already there. What it does do, however, is take almost everything the original game offered and do it just a little better. It’s also the point where the series much more closely resembles what most fans of the older games think of when the subject comes to mind.

In terms of feature set, Worms 2 could be considered an amalgamation of the original game, Reinforcements, and Director’s Cut. Everything that could be tweaked or toggled in those games makes an appearance here for you to change to your liking, along with a host of other options. Upgraded from a cheat code in Director’s Cut is “Artillery Mode” – in which worms can’t move at all under their own power. With the right assortment of weapons and certain other tweaks disabled, you could use this to make a fairly serviceable facisimile of the games that inspired Worms, if you so desired. Each of the weapons themselves have even more options to play with as well – from the strength of their explosions to the exact angle you want that Shoryuken to send your enemies flying. Finally, the game now allows a total of six teams at once, with a total of three worms each, making for even crazier matches. 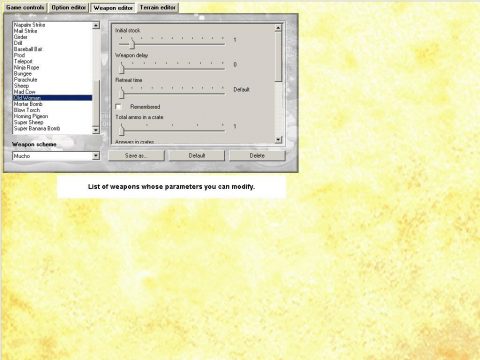 Once you’ve gotten every option just the way you want it, you can then have your settings set to specific schemes – much faster than having to re-enter them each time you start the game. Truthfully, a lot of these options will be esoteric enough that there likely won’t be much need for anyone but the most hardcore of players to give them more than light tweaking. The fact that they’re open, however, is attention to detail that’s most appreciated. As an extra bonus, the game comes with several schemes replicating previous games in the series, should you have settled on a particular favorite. The terrain generator is also just as robust – after generating a level, even deciding just how many random objects scatter the map, you’re free to edit a field further and save it for later use. Unfortunately, the pre-made maps haven’t carried over from Reinforcements.

The worms are somewhat more versatile than before, with the ability to leap straight up or perform a small backwards hop – not often terribly useful, except for particularly weird gaps. Something that’ll see much more use is that worms using the ninja rope aren’t just limited to tossing down dynamite from above. Grenades, bazookas, and even sheep are fair game, further limiting the places an enemy worm can be truly safe.  Landmines are still a constant danger, although they’re thankfully much easier to see this time around – which means you have much less of a chance of inching over one and killing off a worm on your very first turn. They can also be replaced entirely with oil barrels – which explode when destroyed and cover the ground near them with a line of fire that’s most effective on worms without a lot of room to scoot away from the damage. Fire can be a pretty useful tool in general in combat, with weapons like the petrol bomb creating flames that last for several turns, potentially denying advantageous terrain to your enemies.

Nearly every weapon from previous games has returned, with a few new tools to try out as well – mostly upgraded versions of existing weaponry. More novel parts of your toolset are the parachute, which lets your worms safely glide down from a long fall and prevent potential fall damage. The bungee activates when your worms walks off a ledge, making them bounce up and down as the rope stretches and tightens. It can make a good way to protect yourself from a fall, but the lack of control means there’s always the risk of flinging into the waters below. 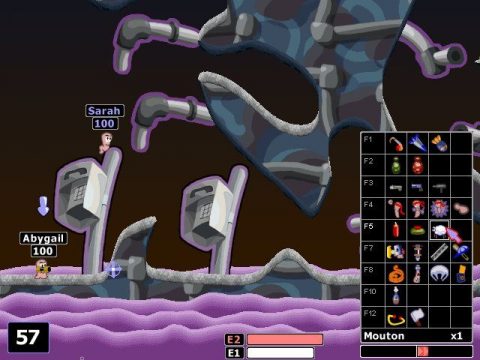 The most obvious change of all, however, would be the massive leaps in graphical fidelity. The game now sports a higher resolution, and it’s the worms themselves that benefit most from it. They’re far larger, easier to see at a glance, and animate much more, even when you’re not directly controlling them. The landscapes have had a high-resolution makeover as well, all of them featuring a more colorful, cartoony look. In a nice touch, destroyed chunks of land no longer vanish, instead exposing the darkened inner layer that becomes part of the background. The battlefields also veer much more towards the surreal – once you get sick of fighting on snow maps, perhaps a level made entirely of cheese, protruding with strange alien devices is more to your liking. 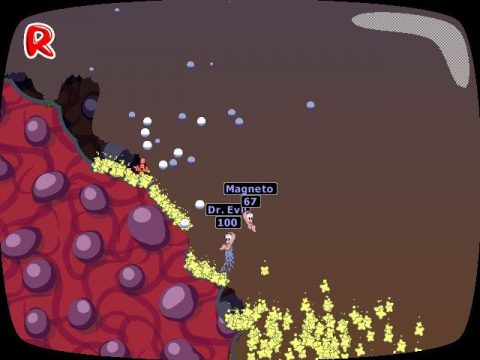 There’s an assortment of more minor changes as well, such as full parallax backgrounds and objects that blow in the wind, giving a vague idea of the current wind strength. The HUD, previously taking up major portion of the game screen, is now far more minimalist, with relevant information entering and leaving the screen as needed. The worms still chatter away, with even more voice packs to select from to keep the voice samples from growing too stale. The music has also seen a major change along with the game’s look, with the soundtrack ditching atmosphere in favor of a much more driven, dramatic soundtrack, complete with plenty of backing guitar. The new tracks generally stand up well enough on their own, but don’t really match as well with the generally cerebral pace of the series at large. 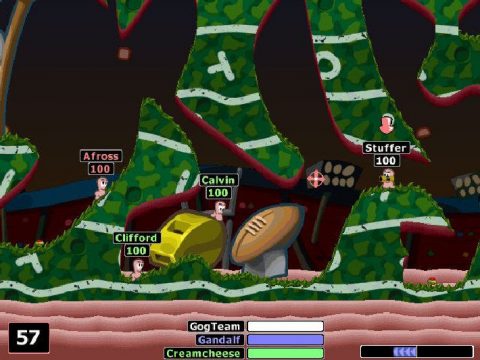 The first sequel in the series is a bit of an odd point – it feels more like a compilation of what came before, rather than offering any truly new ideas. While it’s a solid game on its own merits, just about everything else it does has been generally obsoleted by the game that would follow it. What’s more, while the game can be purchased off of digital storefronts, it’s difficult to run on modern PCs. It also never received any ports, something which the following game would quickly make up for. As a halfway point between its prequel and its sequel, Worms 2 is generally best moved on from all but anybody seeking out every Worms game they can find.