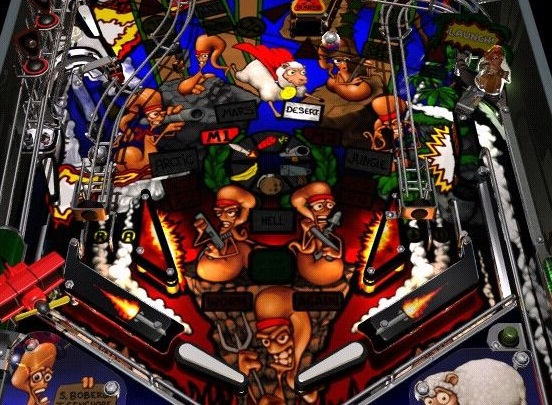 In 1998, Team 17 released Addiction Pinball, a fairly standard pinball simulation that seemed to take much after the Pro Pinball series. As in those games, it featured tables that could feasibly exist in the real world, with acceptably realistic physics. It featured two different tables, one based on Team 17’s racing game, World Rally Fever, the other based on Worms. When the game was ported to the Playstation, it was renamed Worms Pinball, presumably for branding reasons. In 2002, the PC version was bundled with early copies of Worms Blast and renamed Worms Pinball, the World Rally Fever table now missing entirely.. This is also the version you’ll find on Steam, should you purchase the game from there. 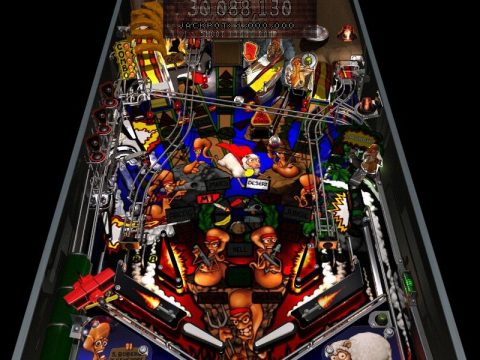 The Worms table, featuring a somewhat terrifying depiction of the worms themselves.

It’s a fairly standard pinball game, and if you’re a fan of the genre, you’ll probably get some enjoyment out of it. There are somewhat less options than you might expect from a pinball game, like being able to adjust the number of balls you’re given or how steep the table is. Strangely, while Addiction Pinball came out after Worms 2, the annelids you’ll see on the table’s LED screen are taken from the original game. In close-ups and on the table art, however, they’re drawn in a style that makes them look somewhat terrifying. Thankfully, they’re never drawn in such a way in later games. Overall, while it’s perfectly functional, if pinball is the only thing you’re after, there are about a dozen other options that might cater to you better.