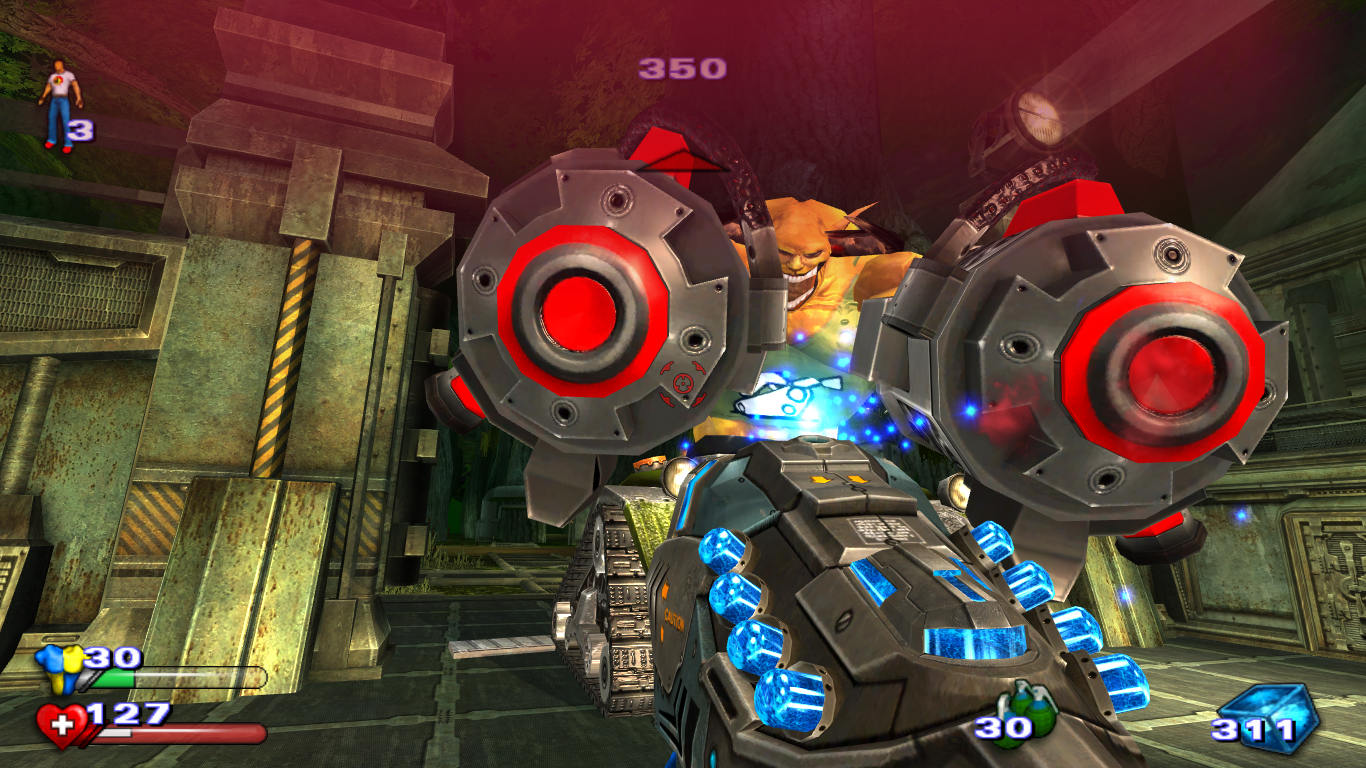 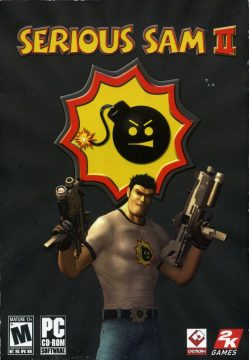 For the three years after The Second Encounter, this serious series of games would be kept alive through ports and new entries by Climax, all while Croteam’s big return would have them among the big boys. They made a new version of their in-house engine (the Serious Engine 2) for this game, working on a proper sequel in mid-2003 as their then publisher Gathering of Developers dissolved (thanks in no small part to the chaos revolving around The Guy Game and Jeff Spangenberg).

They found themselves with 2K Games from there, still a fresh new label, with Walt Williams of Spec Ops: The Line fame slumming it and helping run the Serious Sam 2 booth at E3 2005. That is a strange, wonderful fact. A lot happened while Croteam was away, but they finally came back with arguably the best game in the franchise. Though, you’ll have trouble finding those who would agree with that statement among the very serious Serious Sam fanbase. 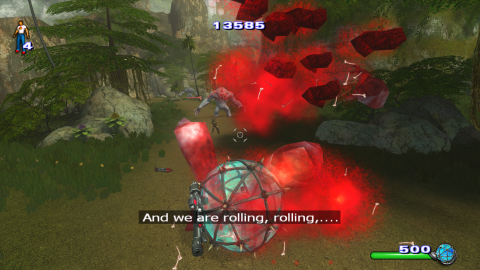 This go, Sam is looking for parts of a pendent that will leave Mental vulnerable, lead on the quest by three aliens who may or may not have asked Duke Nukem to do it before but it took him forever to even try. This will require a trip across the galaxy over five alien worlds in the vein of original series Star Trek, with humanoid aliens living in stereotype lands. And also the kleer planet. And also fantasy Elvis land. Oh, and you end up in a game show of death at one point where cacti shoot at you. Important to mention the game is about 42 levels long, including the seven bosses. It, uh, takes awhile.

The levels in Serious Sam 2 are shorter than usual (for the most part), which helps the game keep a sense of pace it desperately needed to stay engaging. It was designed for consoles in mind, so maps are smaller and hordes are usually more manageable, often making up for lower numbers with enemy variety, saving the classic series mobs for set challenging areas. Several classic monsters have been redesigned or replaced here, and enemy types switch up constantly from level to level, keeping things fresh. Constant variety is the name of the game here, and it’s a met goal. 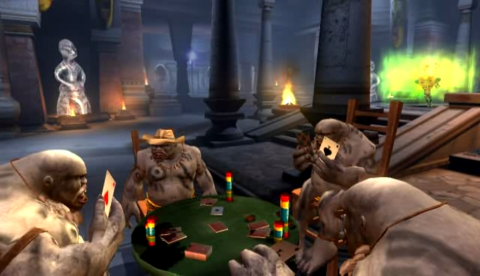 Serious Sam 2 introduces vehicles to the series, which control like a floaty, third person Sam with unlimited ammo. They’re often a fun mix-up in levels, and are also hidden around as secrets. So, instead of going way off the path to find a secret and then have to walk back, now you can have some fun with a hover craft or something and get extra fire power in the process. There’s even a few change ups with them here and there, like the clear balls of death you can roll in to squash enemies – and said enemies will use them too from time to time. The turret sections fare worse, but they thankfully dry up after the first world is wrapped up, with only a scant few moments and often optional.

Other methods of spicing things up come with enemy variants. For example, you may already know the were bull pattern pretty well (though they’re toy rhinos in this game for some reason), but you may find yourself in a more complicated situation when you get introduced to the footballers, who throw football grenades alongside their charge attack. Once you’ve gotten used to a particular enemy type, a different version will appear and force you to get used to some new tactics. The enemy AI is also probably the best in the whole franchise here, with enemies making evasive maneuvers and enemy placement being more carefully considered to create challenging set-pieces instead of mass number chaos all the time. Even the bosses are far improved, each having a gimmick to them you have to learn and use to survive. The last boss is a bit much and horrifically hard on higher difficulties, but the rest are more balanced. 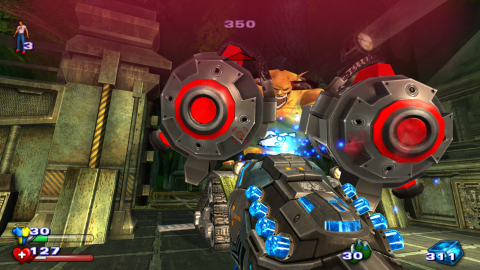 Serious Sam 2 is a thrill ride of fun that is distinctly different from a classic Sam experience for all these reasons. There’s a far better understanding of map design and enemy placement previous games didn’t have, but it also fundamentally changes the majority of the game into a more traditional FPS instead of a frustrating clustershock. There are definitely moments of high spectacle, the first world including a ridiculous segment where you have to defeat multiple towering giant robot spiders, but the minute to minute gameplay sticks with smaller thrills. It loses the game some of that series charm, but makes up for it by having those big moments feel truly massive when they finally arrive in some of the biggest, most ludicrous moments in the entire franchise.

Sam gets some great weapons, including a new plasma gun to replace the laser gun and easily the best double shotgun in the franchise, but none of the weapons are wacky enough to match with the game’s tone, exception to a parrot with a bomb strapped to its neck that doubles as a reference to popular Croation comic series Alan Ford. You also have your weapon set taken at the start of every world and have to play through levels and explore secrets to get your arsenal up to snuff again. There was a bent with the series going in a more arcadey direction after Second Encounter, and this game goes full on, keeping the lives system from the console ports of TFE and TSE. It’s about the fun in the moment and not waiting to see how the game will top its last wild moment. It will get there, you just gotta wait. The fireworks factory is always around the corner. 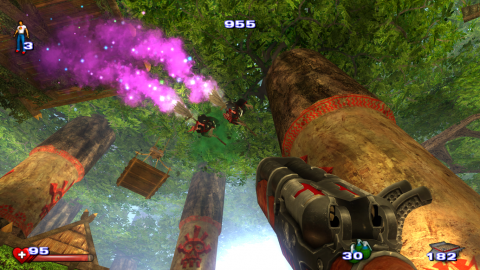 It’s also worth mentioning a brilliant little touch the game added – the grenade button. You have an entire button dedicated to throwing grenades, and they come out divorced from any sort of animation on Sam’s part, instead flying out from about the middle of the screen. Thus, you can shoot and grenade at the same time. This is important, because as the difficulty ramps up in later game, and you face large hordes you have to fight through instead of just run backwards and shoot until dead, you will need those grenades to deal with problems. It’s a great addition the series would be well served to bring back.

The game also introduces a physics engine that later Serious engine versions would remove, most likely because said physics were terrible. Boxes jitter when stacked and refuse to stay in a pile, making secret hunting a bit obnoxious at point. On the plus side, the absurdly high number of crates you come across can be destroyed to find goodies, like ammo, armor, and health, which takes care of any ammo shortages you may suffer without relying on ammo packs (at least for the first half of the game). 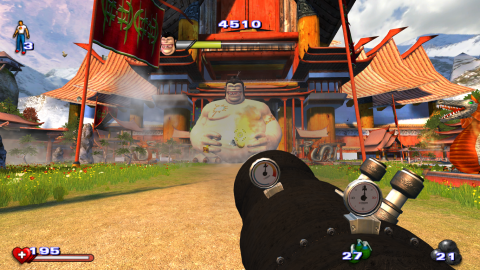 Probably the most polarizing part of the game among fans with the tone shift, taking the mildly goofy tone of the original games and turning it all the way up, all while the writers at Croteam were kind of bad at this whole comedy thing. The game is littered with cutscenes, but jokes take forever to get told, and it’s often difficult to understand if a joke was even there at times. It gives the game an awkward charm, as you try and figure out exactly what you’re looking at, but with the nearly two hours of cutscenes here and how little of them have anything of significance (not to mention the wonky character animation every version of the Serious engine grapples with), they eventually wear out their welcome. It’s a mixture of poor writing and an iffy translation, and the end result is baffling, but in a fun way. If you ever wanted to see Serious Sam awkwardly recite the come out and play bit from The Warriors, this one has you covered. John J. Dick was clearly having a blast with his lines in this one.

The tone issues are partly due to Croteam’s own want for the series, much of the DNA here from the console spin-off Next Encounter, and 2K Games asking for them to make the game more appealing to a wider audience. This mainly resulted in the colorful blood explosions, with every enemy bursting like water balloons into vivid clouds of a whole range of fun colors, not to mention the surprisingly detailed gibs when they pop. I, uh, don’t think Croteam understood how to make the game more appropriate for the target teen demographic, but it’s hard to complain because the blood mist bombings are endlessly fun to watch. Lots of good feedback in the game visually and in the sound design, gives the game some punch and makes regular play a messy blast. 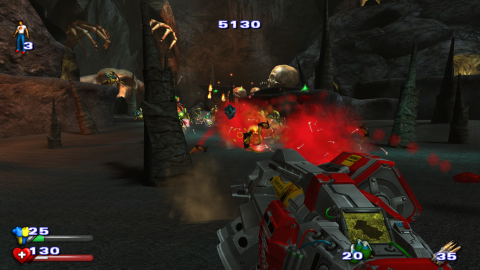 The game has the usual bells and whistles, including co-op, deathmatch, and a third-person mode, but all of this couldn’t really help it out much. The FPS genre was getting back on its feet in 2005, and the starved market TFE released in wasn’t as ravenous as it was before. It didn’t help that Serious Sam, at its core, is a very niche thing, and that main audience didn’t really want the lighter tone the series was headed in. It’s easily the most polished and jam packed game in the series, but Serious Sam 2 alienated its base and didn’t attracted the eyes of new players as much as one would have hoped.

There have been fan rumors that Croteam was disappointed in Serious Sam 2, but this doesn’t seem to be the case. Rather, they have stated they would want to do an HD remake with a major style and gameplay changes to make it more like they wanted, but they’ve never specified what these changes would be, and they kept the re-released Steam version (with help from Devolver Digital) unchanged due to a lot of positive feedback from fans of the game. While it seems that Croteam did change a lot in the game during development for the sake of publisher requests, they don’t appear to be embarrassed by the game at all, which makes sense. It’s a real gem worth trying out, though you should definitely pace yourself. 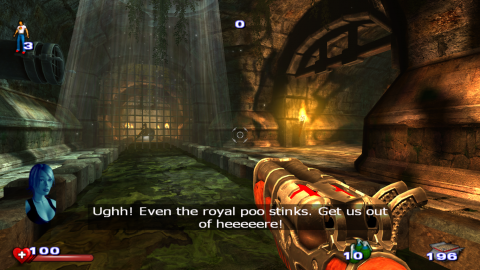 The series went cold for awhile as Croteam bought back the IP from 2K Games, then proceeded to create the HD remakes of TFE and TSE in 2009 and 2010. The following year is when the franchise really returned to form with an official third entry that started to show Croteam clearly wanted to do other things. Fans are a bit mixed on it. But before that, we need to talk about Next Encounter, and more importantly, the start of the now beloved Serious Sam tradition of letting indie devs do their own takes with the character.