Amidst the legions of ninja-themed video games released during the ’80s, Irem had an interesting idea – what if they made the hero younger and more relatable for kids, and fill it with that crazy slang those youngsters use? The result was Kid Niki: Radical Ninja, who burst on to the scene shortly before the Teenage Mutant Ninja Turtles were catapulted into the mainstream with a vaguely similar act. 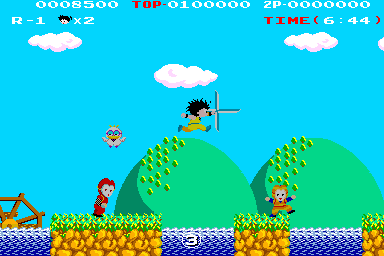 Although Kid Niki was born in the arcades and grew some level of notoriety as an NES game, the series continued on in Japan, with two titles released for the Famicom, and another one for the Game Boy. Although the Game Boy game is similar to the initial release, the two Famicom titles are drastically different. 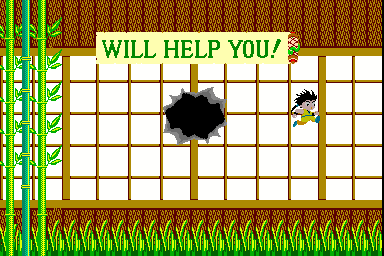 That mangled phrase, yelled emphatically by the heroic Kid Niki before bursting out of his “Ninja School” and into adventure, encapsulates the madcap silliness of Irem’s 1986 arcade game. There were dozens of side-scrolling action platformers in the time, many of them also containing ninjas to some capacity, but there’s a fascinating exuberance to it all, with a momentum that barely lets up.

At its core, it’s not much different from similar type games, except for Kid Niki’s signature weapon, a sword that’s twirled out in front him like a sawblade. (It is not evident how he can do this without shredding himself in the process.) What this attack lacks in range, in makes up for with versatility. As compared to normal sword swings, which have tiny vertical range, the blade is circular, allowing you to hit enemies slightly below or above you, even though you can only technically attack forwards. It’s just a unique and cool enough weapon to set it apart from the crowd. Enemies are also comically flung off the screen when attacked, adding to the silliness. 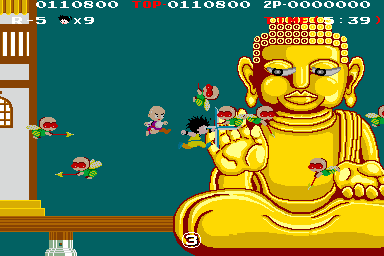 It’s also relentlessly paced. Kid Niki can only take a single hit before dying and getting tossed back to an earlier checkpoint, requiring not only exacting reflexes but precise memorization. The timer counts down quickly, enemies come from all sides, and stages are filled with traps and fake-outs, designed to make gamers yell aloud with frustration. Once you’ve found a fire breathing frog, and think you’ve found the best way to defeat them, you come across a frog facing backwards. This will be easy, you think, until the frog immediately bends itself backwards and burns you to a crisp.

The stages are tough, but it’s really the bosses that end up as the most difficult parts of the game. Each of them has specific weak points to exploit, otherwise your attacks will bounce off harmlessly. Furthermore, you’ll be stunned momentarily and your sword will be flung across the screen, sometimes even when your attacks are successful. So not only are you trying to figure out when the enemy is vulnerable, but also a way to recover and re-equip yourself without getting killed. And the enemies get really tough, really quick, although most of them are quite silly. There’s a mini Buddha with a spiked yoyo, and a mad monk that yells and attacks with gigantic kanji. The final boss, the “Stone Wizard” in the English translation, is a gigantic kabuki actor. The entire final stage is a chase amongst the rooftops, as you need to dodge his fire pillars and find a way to strike him without falling to your death. It’s monumentally more difficult than even the most cruel Dracula fights in any Castlevania game, which is saying alot. 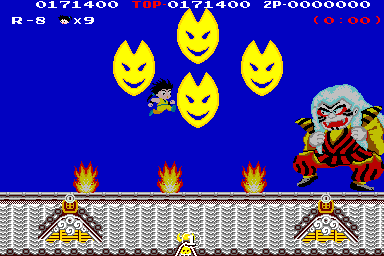 The graphics are decent for 1986 – the game runs on the same hardware as Spartan X/Kung Fu Master, and looks much better, with more detailed sprites and more varied backgrounds. Kid Niki has an cartoonish way of running, with his legs and arms scrambling forward as his head slowly tilts back and forth. The theme music is catchy, except it’s only about ten seconds before it loops, and it plays for more than a few levels.

Its somewhat silly North American title was influenced by the surfer dude fad of the 1980s, hence the Radical Ninja subtitle and the bright pink box cover of the NES version, complete with Kid Niki dressed as a surfer ninja and the Stone Wizard looking like a pig with a mohawk. The original Japanese version was not quite so over-the-top. The title is simply Kaiketsu Yanchamaru (“The Fantastic Yanchamaru”) and he has a traditional Japanese ponytail as opposed to the spiky hair look of his American counterpart. The masks on the enemies look slightly different, too – in the Japanese version, they have slanted eyes, looking like a fox, while they have rounder eyes in the American version. 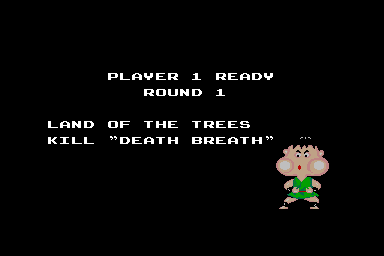 The English names are also different for entire cast. Beyond Kid Niki/Yanchamaru, Princess Margo’s original name was Princess Kurumi. The American version also introduces each stage with a picture of the enemy and a bit of text. (“Stage 1: Land of the Trees. Kill Death Breath”.) The Japanese version just has a bit of text that says “VS. BOSS NAME” (“Stage 1: Vs. Otafuku Tarou.”) There’s also a silly little introduction text in the English version – “You are a totally rad ninja swordsman. Princess Margo is being held captive by the Stone Wizard. Save her! Good luck dude!” – when depositing a credit, where it’s an entirely blank screen in the Japanese version. The end of level translations are also spruced up – while beating a level in the Japanese level rewards you with “Omigoto!” (“Well done!”), the English version says “Atta boy!”. The little counter at the bottom of the screen counts from one to ten in kanji in the Japanese version, while it counts from 10 to 1 in standard numerals in the English version. The North American version also has two checkpoints throughout each stage, while the Japanese version will send you back to the beginning of a level if you die. How rough.

The NES version is quite an excellent port, and was published by Data East in North America. Despite the obvious graphical downgrade, it’s quite faithful. The hit detection is a bit dodgy during boss fights, but it occasionally works in your favor. It also manages to keep most of the voice samples. This version uses midlevel checkpoints in both the Japanese and American versions, which makes it more forgiving than the Japanese arcade game but harder than the American one. The change in hairstyles remains, although if you squint at the status bar, you can see what the “lives” indicator still uses the original Japanese hairstyle in both versions. A few graphical details, like the backwards frog and Kid Niki’s silly run, have been sacrificed. Each level is also broken up into fifteen substages as opposed to ten. There are also rare power-up bells that provide a temporary bonus. A ball will rotate around Kid Niki, spinning faster if you hold down the button. Unfortunately it disappears after a short period of time. 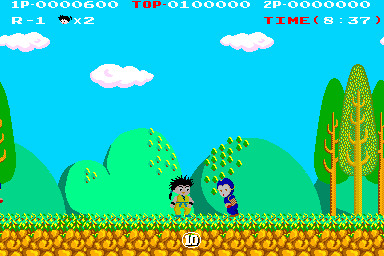 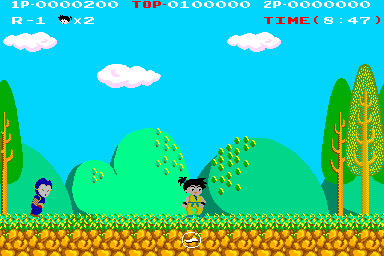 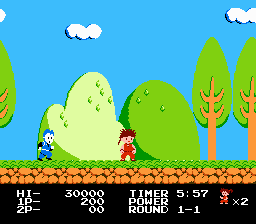 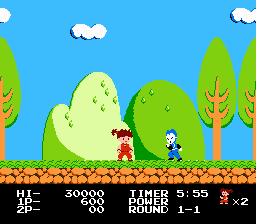 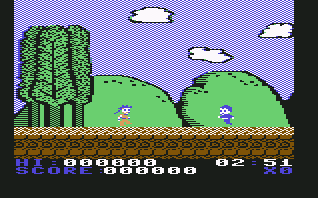