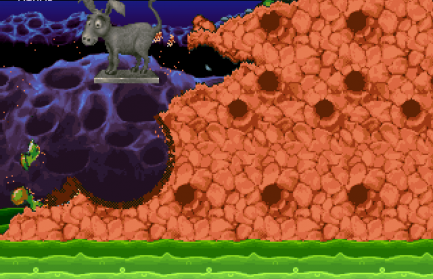 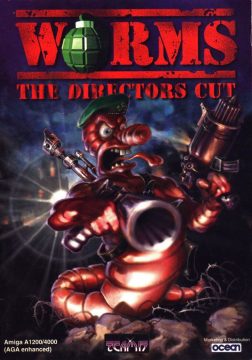 Team 17, the company who helped polish Worms into a commercial state and put it on shelves, were one of the best known figures in Amiga gaming. Despite all their support, however, all the factors that led to Commodore’s demise couldn’t be mitigated. By 1997, the ship had already long sunk, with only the true diehards of the system still hanging on. Despite this, Team 17 had one more game to reward the loyalty of those fans, a Worms experience made exclusively for those still with Commodore’s machine. Despite a lack of commercial success compared to the original, it still stands as a worthy entry, especially it would, along with Reinforcements, build the concepts that would eventually form the series’s first true sequel.

Director’s Cut doesn’t offer quite as many gameplay options as Reinforcement did, and misses out on major gamechangers like worm selection and retreat time. You are, however, able to individually tweak the maximum damage of every weapon, as well as the likelihood they’ll be found within a weapon crate. For the first time, you can also play in a 2v2 mode, teaming up with another player to bring your combined forces against two foes. Also newly added are “cavern” maps, where the battlefield is enclosed with a randomly generated ceiling. These make for some big changes – you can’t perform airstrikes if there’s nowhere for the bombs to come in from, after all. Care needs to be taken that your projectiles don’t land harmlessly in the ground above, making things like homing missiles far less reliable than they would be in an open-air map. 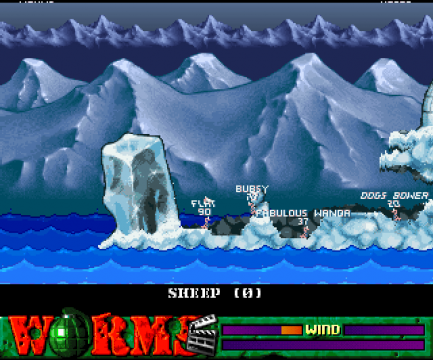 The ninja rope has also had a few tweaks, turning it from a situational gimmick to a tool you’ll have to know in and out to achieve true Worms mastery. You now have multiple swings with the rope, which means you can swing forward, release, let the momentum carry you forward, and then throw out another rope. It’s tricky to pull off at first, especially without hitting a wall and plummeting to the ground. Once you’ve learned the proper timing and the ways the rope bends the laws of physics to its whims, however, there’s few places your worms can’t go. Even more satisfying is the ability to drop dynamite while dangling from a rope, and then swinging away to safety as your opponent watches helplessly. 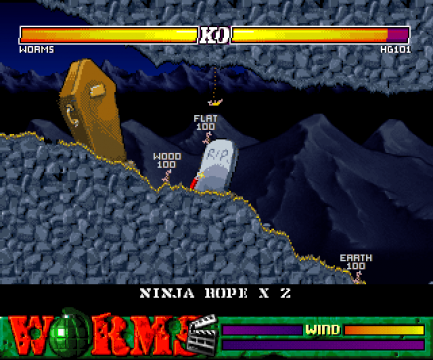 Introduced here are an assortment of new weapons both part of the regular arsenal and hidden inside weapons crates with which to get used to. While a couple are now part of the standard arsenal, most of these additions can rarely be found hiding inside a weapon crate. In fact, most are so powerful that they can’t even be toggled by default, requiring a cheat to be uncovered within the options screen. A good portion of these are simply supercharged versions of existing weapons – the baseball bat sends worms flying even further than the “Dragon Ball”, while the “Mail Strike” literally drops letters atop enemy worms, operating like the airstrike with more destruction and a bigger spread. Most fun of all these is the “Super Sheep”, which launches like a regular sheep, and then spawns a cape, putting it in your direct control as you fly it into whichever worm you like the least. 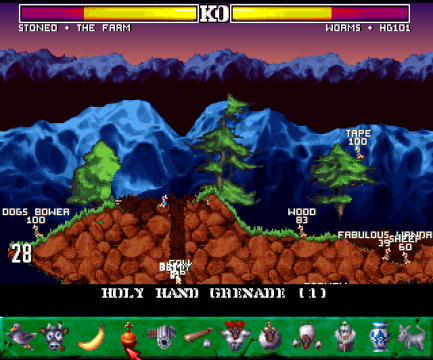 There’s not to say there’s some more creative choices of weaponry to be found, should you be extremely lucky – that or use a second cheat to unlock the even more secret weaponry. The nuclear bomb raises the water level, potentially swallowing worms who are too low to the ground. Perhaps most deadly of all is the “Concrete Donkey” – a statue of a cartoon donkey, as advertised, that bounces up and down onto the terrain beneath it, utterly demolishing any ground and worm alike that happens to be below it. If you’re absolutely sick of being outplayed by those dark side players and all their tunneling, this will ensure they’ll pay for it – that is, if you’re extremely lucky. As goofy as these new weapons tend to be, almost all of them would eventually become so ingrained in later Worms canon that they might as well have always been there. 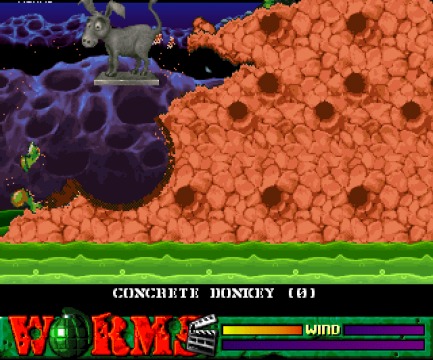 The concrete donkey: When a particular patch of ground just absolutely must not exist anymore.

Also on feature is the ability to create custom maps in two different ways. Instead of randomly generating a map, you can simply draw a landmass on the screen with your mouse, with the game automatically including extra foreground objects once you’re done. If you happen to have a copy of Deluxe Paint for your Amiga, (a rather rarer thing now than it was when the game released), it’s possible to create more complex images on which to battle, as well. With some searching, fan-made maps and landscape styles can be found, although exactly how one installs these is best left to the hardcore Amiga fans. There’s also a few extra graphical touches afford by the more powerful Amiga 1200 the game requires, including fancier particle effects and an effect where destroyed ground leaves behind a darkened inner layer in the background. It certainly looks better than having the disembodied chunks of land floating in nothing.

Contemporary reviews stated that owners of the original game wouldn’t really have need for Director’s Cut, and that isn’t an unfair statement. The biggest change of note is the flexibility added to the ninja rope, and later games in the series would only take that particular feature further. As it is, Director’s Cut stands as more of a historical curiosity for series fans. Or, for those who happen to have the advanced Amiga models the game requires, a collector’s item – especially since only around 5,000 copies ever saw sales. As a farewell gift to a beloved platform, released by one of its most well regarded supporters, however, you could hardly do better.