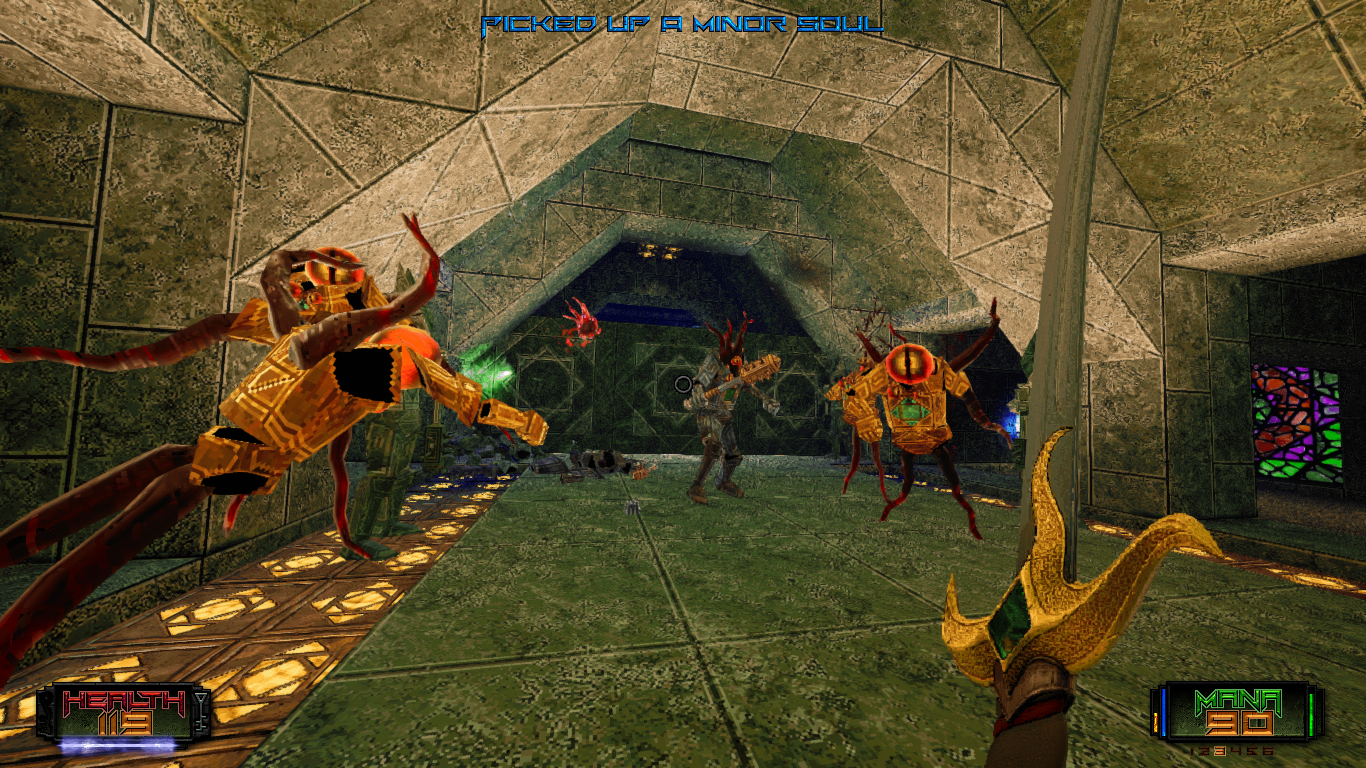 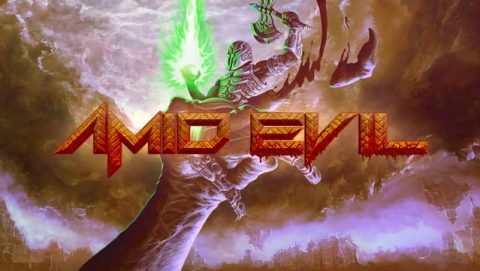 If you’re familiar with DUSK, you should probably be familiar with the second major FPS New Blood put out. If you’re not, you should change that very quickly. AMID EVIL has a familiar foundation, but it’s a unique beast in a lot of ways. Developed by a variety of devs behind the rocky Rise of the Triad reboot, AMID EVIL is a send up to the likes of Heretic and Hexen, a fantasy themed FPS bloated with monsters and mayhem. Where DUSK benefited more from its unique level design and the little touches it put on the old Quake formula, AMID EVIL succeeds through the tightness of its combat. 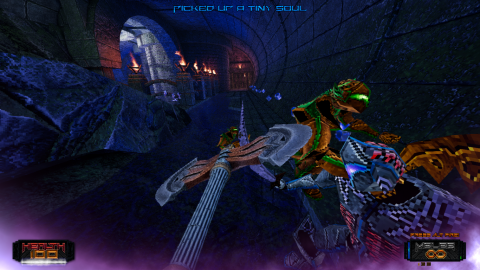 The excuse plot is that you are the champion, a mighty warrior sent to free the realms from a dark corruption that has already won the day. You do this with ye old battle axes and magic staffs, among other things. Your arsenal is seven weapons, which seems low, but their specific uses more than make up for that. Your starting ax takes no mana, the game’s ammo type, while everything else is divided into four colors of mana use. The shotgun equivalents use green ammo, rapid fire weapons use blue, yellow is reserved for a rocket launcher type weapon, and purple for your magical BFG.

Your starting ax is actually a rare highly useful melee weapon, able to one hit the majority of enemies you’ll come across for the first half of the game, and it draws in enemies while in use for the chop. It speeds up fights significantly. Green mana weapons are a sword that shoots a sword beam that can hit multiple enemies and a crystal mace that can unleash a deadly swarm of magic rocks that hits harder at closer ranges. Blue mana weapons are a staff with homing shots (great for flying enemies) and a very accurate electro-trident that functions sort of like a slow fire machine gun that can make enemies gib with enough shock. The yellow mana weapon is a staff that launches exploding planets (which occasionally includes the Earth), and the purple mana one unleashes an electric ball of death after a short charge. 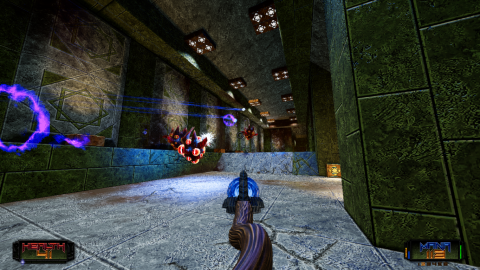 Further more, the game has a soul meter that fills as you collect souls of fallen enemies. When full, you can use alt-fire to unleash a super mode for your weapons, though you can also check an option to make this happen instantly when the meter fills (as it was like in early access). The ax becomes a spinning instrument of doom you can charge enemies with, the sword fires stronger beams that ricochet off walls, the mace fires homing shots with a huge damage boost, water staff gets a hard damage boost and turns enemies into water, trident becomes a thunderbolt from Quake, planet launcher fires exploding stars, and the purple mana BFG creates black holes that swallow up most everything. All these modes take more ammo (except the ax) and can turn tough situations into flashy storms of nonsense that wipe your foes from the lands.

The trade-off is that enemies are very, very dangerous. There’s a wide variety, changing up with every one of the seven episodes, and they all offer a different sort of danger to deal with. There are the less durable but vicious melee chargers that tend to shake things up with variants like the leaping ninja guys in a later episode, flyers that pelt you with fast projectiles, big guys who take more damage that dish out attacks you have to read, and surprise floaters that take damage and fire off punishing attacks you need to stay away from as soon as you see these guys spawn. There are also unique enemies to various episodes that require strategy change up, like crystal monsters that spray you with tiny crystals when you’re in their sight, or mages who are using the same weapon set as you. There are even baddies that leave a toxic effect on the ground for awhile that can damage you as you pass over. 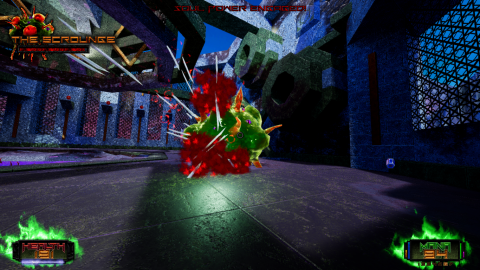 Where the challenge comes in is that these enemies are often placed in a way where you have to deal with a wide selection of them at once, and running backwards ala Serious Sam will not cut it. You need to learn to weave through the chaos, use strafe jumps to avoid projectiles, read animations, and most importantly, dish back your own pain. While normal difficulty gives you plenty of purple mana to make these battles much easier, harder difficulties will actually speed up enemies to make them even more vicious then ever before. The bosses even stand out a great bit, each episode changing things up with a unique challenge with each end game big boy. The otherwise iffy forge episode (I hope you like waiting to avoid traps!) arguably has the most interesting fight, with a giant fire knight you have to drench to leave him vulnerable.

AMID EVIL is more than a mob shooter or a classic FPS send up, it’s a furious refinement of these old formulas. It’s not that the game innovates, but that it refines everything that was there and directs those mechanics towards a unique experience no other FPS game out there quite matches. The flow of fights and tightness of movement, animations, and the careful balancing of the weapons is masterful stuff. On a combat design level, there are few games as meticulous in their design as this one, though the long levels can occasionally downplay that. They have a habit of going on a bit longer then necessary, but outside the forge episode (I HOPE YOU LIKE WAITING TO AVOID TRAPS!), it rarely even becomes a major negative in the moment. It could simply be a bit tighter and make a more enjoyable game in the process. That might why there’s a wave mode, where you can really get a feel for how great the combat is with large mobs on sizable maps. 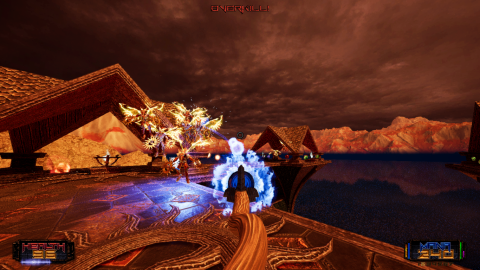 It also helps the game is just a treat for the eyes and ears. They made the most of the unreal engine they’re using to keep the blocky DUSK models, but also using high end textures and beautiful lighting on higher settings. It has a unique look to it partly due to these technical touches, but the art design is the real key to this, creating a ton of fantastical dungeons and dreamscapes. All sorts of colors are used in each episode, and the more samey areas still get a splash of life from the weapons and enemies on display. Special mention most be made to the sixth episode, which takes place in a starry realm of stained glass and colors, incredible wallpaper material.

The sound design gives you all the information you need, when an enemy is just damaged compared to its death sounds, and the soundtrack matches up with it great. Andrew Hulshult, who seems to be aiming to compose every modern boomer shooter ever made at this rate, handled the score and made a rich and exciting set of tunes that fit great with the fantasy epic theme. Once again, episode six is the pinnacle, starting with this beautiful piece with a slow build that reminds one of a particularly emotional fantasy metal track. 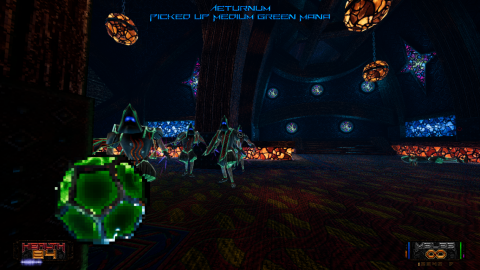 AMID EVIL is a great time and a must for FPS fans who want more from the combat than the map design. Despite all the similarities to DUSK, this is a very different beast, and a great compliment to that game. They make a great pair to show just how strong the talent working with New Blood is, and it suggests we should be excited about whatever the publisher does next. These are works of incredible passion and love for the genre, and few indie and Double-A releases quite match them.