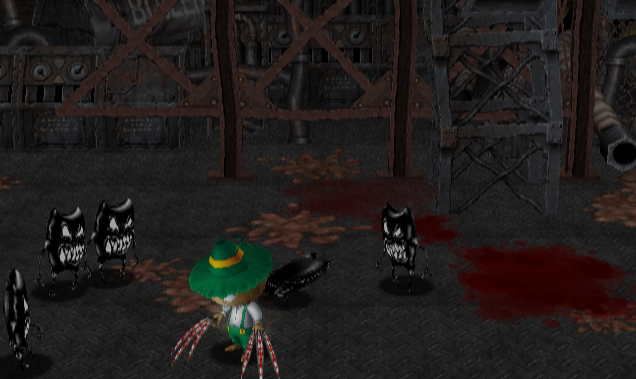 The star of Splatter Master is a pumpkin-headed scarecrow child who packs twin chainsaws. He’s the perfect protagonist for the setting he inhabits, a super-deformed, horror-themed world which takes a cue or two from Splatterhouse: Wanpaku Graffiti – you can even wear a hockey mask to increase the power of your chainsaw attacks.

The story is a simple fairy tale affair; an evil wizard named Jagodd moves into a peaceful village and begins turning people and objects into monsters. Most residents pack their stuff and leave, but an elderly couple decides to stick it out on their farm, until they are kidnapped themselves. Their scarecrow, meanwhile, is also brought to life by the wizard’s magic, but decides to go against him and his minions to rescue the elderly couple, who “loved him like their own child””, which is surely the strangest element to this narrative. 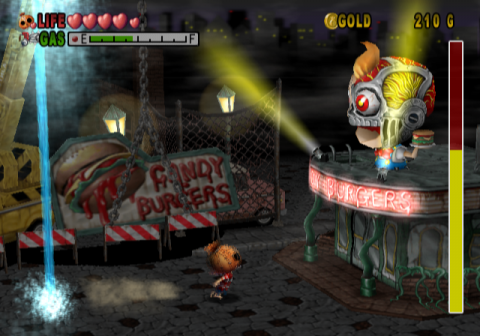 Gameplay-wise, this is a mostly successful 3D beat-’em-up/platformer hybrid. The scarecrow – though unnamed within Splatter Master, he’s known as Deathdoll Kakashi in a later appearance – normally fights with his fists and kicks, but pressing L1 and R1 together has him pull a spinning attack with his chainsaws, after which he fights with them until you either put them away through the same spinning attack or run out of gas. Its use goes far beyond crowd control; killing three monsters or more with it freezes the action while a word appears across the screen to congratulate you, leaving behind a sea of blood and gold. The gold bonus grows exponentially based on the death toll and the enemy type. This gold is then spent to buy permanent upgrades for your health and gas gauges or new moves like a Double Jump which lets you come crashing down to the ground headfirst, sending a damaging shockwave throughout the immediate area. Since the game’s linear structure doesn’t allow for grinding, your ability to splurge on those upgrades directly depends on how well you set up those chainsaw attacks, and pulling two or three successful massacres in a row is the most satisfying aspect of the game.

There are 7 levels, starting with the fields and abandoned buildings of Deathdoll’s village all the way to the wizard’s castle. The visuals are surprisingly good, from the rich environments to the large and often impressive bosses that await at the end of each level, and hardly betray their low-budget origins. The most interesting level has you walking alongside a stopped train in a desertic area, from which wagons periodically open to release group of monsters. When you reach the head locomotive, a giant, skull-faced worm bursts through the train, biting and throwing wheels and various other parts at you. True to its philosophy of merging old- and new-school design, the game gives a steady challenge, but rather than having multiple lives, you’re allowed to restart a level as many times as you like, and you can save your game if you decide to quit. This leads to Splatter Master‘s major frustration; there are no checkpoints before boss battles, meaning you only get one chance to beat them before you have to go through the whole level for another shot. The shop in which you spend your hard-earned gold is actually a truck you first encounter in the second level – an abandoned city a night- and after every level from then on; it is (wo)manned by the only normal human you will encounter during the game proper, a young woman in sexy clothes with giant, post-apocalyptic googles on her head who chides you when you leave without spending money. The splatter alluded to in the title, meanwhile, is almost cute in its cartoonishness, with large spurts of blood that disappear shortly after they touch the ground and bosses cut in half when you finish them with the chainsaws (which also increases the amount of money they drop). 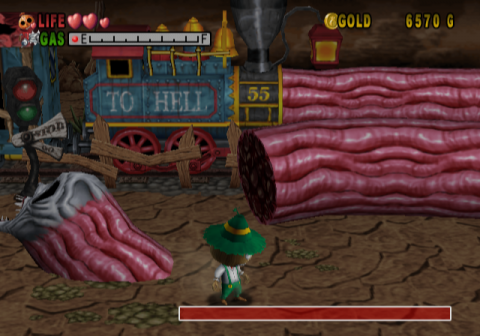 In keeping with developer Vingt-et-Un Systems’ habit, there is a notable attempt at providing replay value through various unlockables. You must finish the game on Normal difficulty twice to get the true ending, which unlocks a new costume allowing you to play as a human child; finish the game yet again while playing as that child and you unlock a new character, a more sinister-faced scarecrow in green overalls with large Freddy Krueger-like claws rather than chainsaws. The first time you beat the game, you also unlock a “Survival Mode”, in which you run through a long course in a coliseum, fighting monsters and occasionally picking up restorative items in front of an audience of monsters who boo loudly when you’re doing good and cheer whenever you get hit. There are yet more options to unlock by beating Survival Mode or finishing the game on “Hard”, which is no easy feat but gives you the chance to really strike it rich by throwing far more enemies at you.

The up-tempo soundtrack does a good job of pumping you up, mixing heavy metal guitar riffs and keyboards with the occasional creepy effect. While none of the melodies are strong enough to be really memorable, at its best it sounds like throwaway boss themes from Ys. 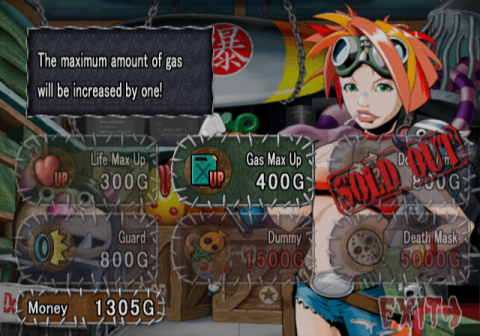 As is the case with many other titles in the Simple 2000 line, the English-language version was only released in Europe, through budget-game publisher 505 GameStreet. Thankfully, they added an option to choose between PAL or NTSC modes, and even had the good sense to use the same cover art illustration. 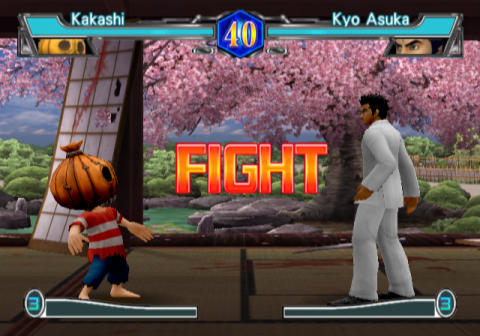 Being one of few standouts in D3’s generally low-quality Simple 2000 series, Splatter Master‘s hero appeared in their All-Star Fighters, which is where he received his Deathdoll Kakashi moniker. Despite the (admittedly decent) 3D graphics, the game plays like a so-so Street Fighter clone, which is actually enough to make it one of the better Simple games. Deathdoll has a few moves involving his chainsaw, including his spinning attack, but no story of his own.