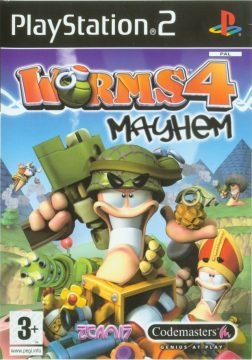 After the sudden detour Forts would take with the series, Mayhem just as sharply returns things to the status quo. All except for the series remaining in the third dimension, at least – for whatever reason, Team 17 saw fit to give 3D one more try. The result is actually far more playable than the last couple of attempts, but is still unlikely to change the mind of anybody who felt the Worms games worked best from a 2D perspective. What Mayhem really does is improve on what 3D introduced, albeit not quite to the extent some might have hoped. After the innovative but somewhat misguided Forts, however, some might appreciate the familiarity. 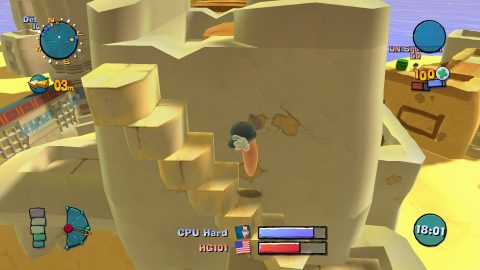 With a new Worms game come new weapons, all of which vary in how often you’ll use them be used. The Tail Nail is a hammer that prevents enemy worms from moving without taking out the ground beneath them, leaving them easy targets for future strikes. Bubble Trouble drops a machine on the ground that creates a shield, protecting worms from all attacks that come from outside the bubble. The highlight and most versatile of all is the sentry gun, a weapon that’ll see several future appearances. Once placed, it’ll swivel to face any worm that comes too close, making it perfect for area denial. A more minor tweak is the ability for the ninja rope to grab crates, barrels, and bombs, tugging them closer towards your worm for your own purposes. 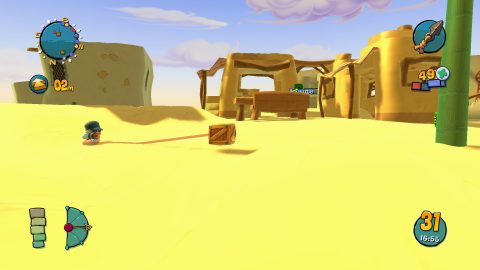 It’s more useful when it’s not in walking distance.

Something that makes the game far more playable are the way random maps are generated, something that was a source of much frustration in Worms 3D. This time around, you can expect the generator to give you flatter, wider, islands where almost all of the vertical elements come from prefabricated structures like buildings or volcanoes. Maps are generally smaller on the average both horizontally and vertically, as well, which means your projectiles generally don’t have as far to travel to hit their target. Sometimes there’s more or less water breaking up the various chunks of land, but in general you’re left with much more solid land to work with. Another improvement is that there’s a little more ground beneath you, meaning it takes more than one errant explosion to expose the deadly water underneath the ground. 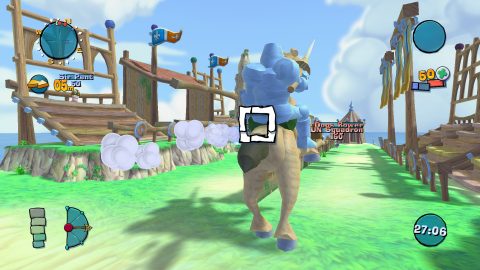 While a lot of frustration has been removed, the 3D perspective hasn’t really added anything to the general gameplay, either. You can no longer really dig yourself into the terrain to defend yourself from attacks, especially since landscape damage still doesn’t feel like it’s as noticeable as it should be. The most cover you’ll often get comes from hiding behind objects or ducking into the occasional building. This means that a lot of the time, you’re going to find your worms right in the middle of open terrain, which is never going to be a safe place to be. Actual movement hasn’t gotten any faster, either, which tools like the ninja rope being somewhat too difficult to rely in 3D to get from place to place. 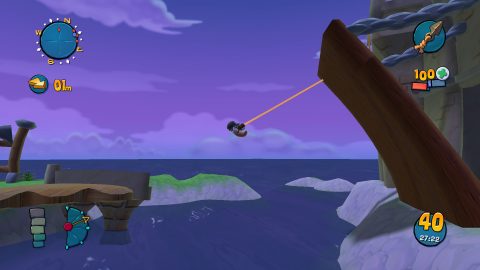 Mayhem features a story mode about going to different places in history, much like what Forts had on offer. This time, however, there’s only one continous storyline, broken up with FMV cutscenes with each change in location. The plot still isn’t there for much for than silliness; the nutty Professor Worminkle uses his students to mess with the operations of a pack of enemy worms, before going off with them on a trip through time. Cutscenes both pre-rendered and in-engine provide silly dialogue and the occasional slapstick, complete with the voice actors providing (subtitled) high-pitched gibberish. It’s not exactly complicated or ever laugh out loud funny, but it’s ample motivation to make your way through the missions. 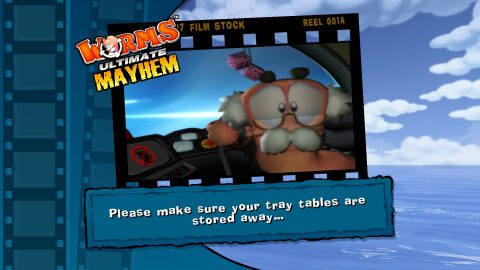 If the windows the FMVs for this remaster were any smaller, you could mistake it for a Sega CD game.

The campaign is actually somewhat on the easier side, with the AI opponents never quite feeling like they’re as ruthless as they could be. They do at least keep things varied, however – aside from taking out the other team, you might be asked to platform your way to certain areas, blow up certain targets, or defend the professor from attack. Clearing these missions earn you coins you can use in the shop, letting you purchase new maps, game styles, and customization items.

The sniper rifle is one of the rare Worms weapons that actually works better in 3D.

There’s also a handful of new multiplayer modes, some of which can only be played against human players. Homelands recalls the ‘Forts’ mode seen in World Party, where each team has a building they can launch attacks from. The ‘Destruction’ makes it so taking out this fort takes out the team defending it, while ‘Survivor’ mode features two teams having to take out each other’s worms, one at a time. Finally, ‘Statue Defend’ tasks your team with defending a set of statues at your base while taking out your enemy’s set. Unfortunately, these modes don’t really radically change the game all that much, since they all still boil down to killing worms in the way of your task.

Worm customization has also been expanded. Aside from swapping out voice sets, gravestones, and flags, you can now change the visual look of your worms. Along with giving your worms a jaunty hat, as seen in Forts, you can also give them eyewear, gloves, and a facial accessory to further set them apart. Although there’s not a massive amount of options for each slot, it’s a helpful way of picking your team out from the enemies in a crowded map. You can also create a “team weapon”, a special weapon that can be launch, lobbed, or used in an air strike. This isn’t much more than a gimmick, since you’re only given so many points to adjust the parameters of the weapon, and it’s never quite enough to make a weapon that feels suitably devastating. 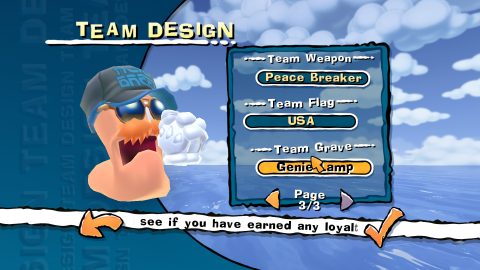 While the graphics haven’t grown much on a technical level since previous games, the cartoony style still holds well. The colors feel brighter and the skyboxes look much less downcast, making for a much more vibrant looking game. Aside from the costume pieces giving them more visual variety, the worms themselves have even more incidental animations for the various things that can happen to them.

Overall, Mayhem makes a remarkable improvement over previous games in the series, with most of its worst issues having been smoothed over. It doesn’t particularly add a lot, however, nor does it try to do much that Worms 3D didn’t try already. It is the best Worms has ever been in 3D, however, by far. Due to the game’s rather lukewarm reception and low sales at launch, however, it’s quite likely that it’ll indeed the best Worms will ever be in 3D. A near total lack of playerbase, however, means that it’s perhaps best found for cheap, if at all possible. 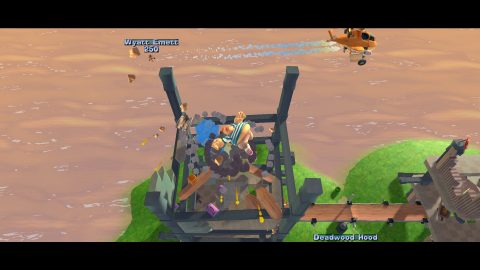 The Playstation 2 version was only released in Europe. It’s almost identical to the XBOX version, with the only major being difference being the PS2 version’s lack of online play.

In 2011, the game was remastered for the PS3, 360, and Steam. Renamed “Ultimate Mayhem”, the remaster features an assortment of improvements and changes over the original release. There’s the extras you’d expect, such as leaderboards, better controller support, achievements, and support for higher resolutions over the original PC release. A nice surprise, however, is every map and story mission from Worms 3D included in the package, obsoleting that game nicely. A suite of bonus missions are also featured that task you to take out targets with various weapons, navigate areas, or take out another team in record times. All cutscenes now feature full English voice acting, although the FMVs now play in a small window, for whatever reason.