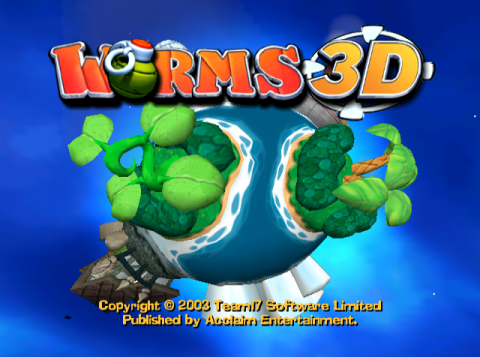 After the odd detour that was Worms Blast, one could only wonder what else Team 17 could do with the series. Surely the irreverent nature of the series would have opened it to many more spinoffs, each of its branching into even more divergent genres. The next game, however, would be a return to form, with one major exception. The series would make that great leap almost all long running series take, sooner or later. The worms would finally enter the third dimension… and would unfortunately find the difficulties so many other games encountered on the way there. 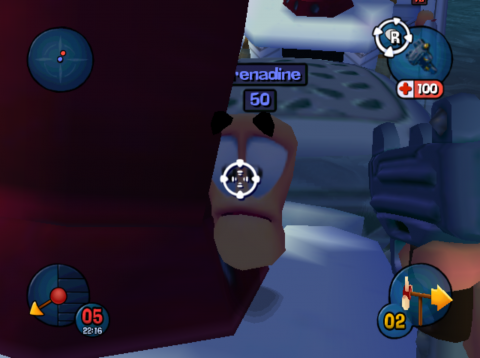 The base gameplay remains the same as ever – kill all the enemy worms before they can do the same to you, using whatever loadout you’ve selected before the match begins. In terms of base feature set, about everything you could ask for is here, as four players can be part of a match at once, game schemes can be tweaked and saved, the Wormpot returns, and there’s a satisfactory selection of weaponry. Not every weapon has made it from World Party, unfortunately, with things like the torch, drill, and ‘dragon ball’ most likely felt too difficult to implement in 3D. There’s also a handful of new things to find hidden in the crates, including a somewhat random cross promotion with Red Bull. It doesn’t give you wings, but it will restore your health while letting you move faster and jump higher. 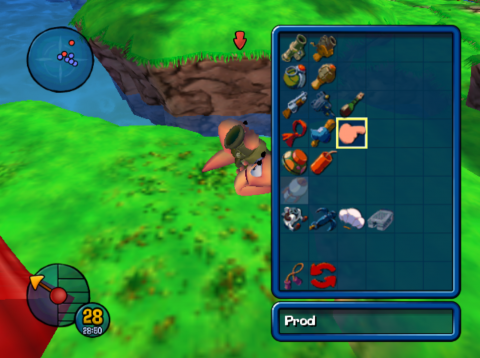 You know where this is going.

While everything is as it should be in theory, trying to play the game introduces an assortment of issues introduced by this new dimension. Instead of taking place on a side-scrolling 2D landscape, matches now feature the worms moving in a third-person perspective throughout a three dimensional world. While the worms don’t have any new movement abilities to help them get around, they have somewhat more air control to compensate, with the backflip now serving as a controllable high jump. Judging distances can be often more difficult, however, making precision jumps a lot riskier. 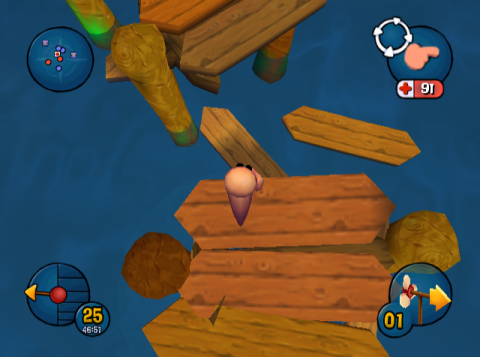 Pictured: Not a jump you want to misjudge.

Landscapes now also stretch In all directions, distances between worms can feel a lot longer than they used to, something that isn’t help by the worms’ typically slow inching around the map. As is often the nature of earlier 3D games, the camera can just as often get in your way, often by blocking the view of one of your worms with some part of the landscape. It’s a flaw somewhat mitigated by the control afforded by a mouse, but it’s far more of an annoyance with a control stick. 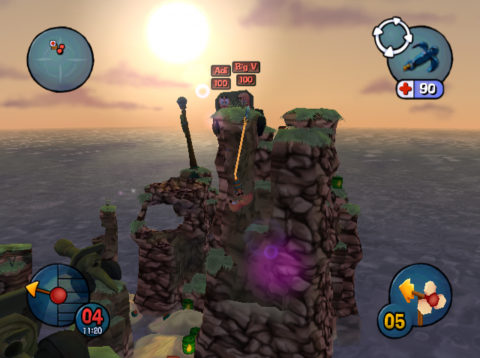 The ninja rope doesn’t get any easier to use in 3D.

Due to the nature of the third person perspective, you can now only generally see what’s around your particular worm. Compensating for the lack of traditional scrolling is an overhead view that gives you a view of the entire landscape, which you’ll also use to paint air strike and homing missile targets. For nearly everything else, aiming is done through a first person view. Something about this is going to feel a little unnatural to those used to the 2D games, and it never really becomes quite comfortable. Unlike what your first instincts will tell you, you still have to judge for not only the angle, the direction and the strength of the wind, but also a whole new axis. 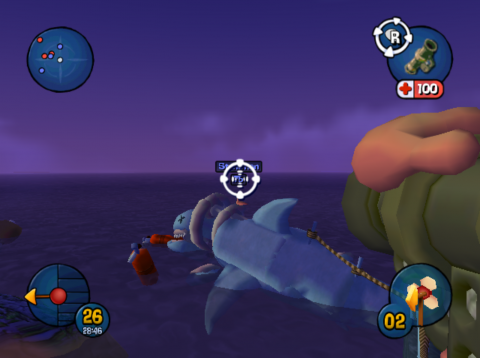 Judging the proper strength and angle even on a 2D plane is a difficult skill to master, but in the third dimension, it becomes even more difficult. Without a lot of practice to shake off muscle memory, you’ll find a lot of your bazooka shells and grenades going clear over your target. Your best bet until your aim finally improves is to stay closer to your targets, which in itself puts your own worms in danger. More reliable weapons like the shotgun aren’t much better, as your worm’s aim sways so often that even that isn’t a sure thing. What actually becomes more effective are melee attacks like the fire punch and baseball bat. Since all landscapes is now surrounded by all sides by deadly water, the chances of such attacks knocking an enemy to their death become much higher. 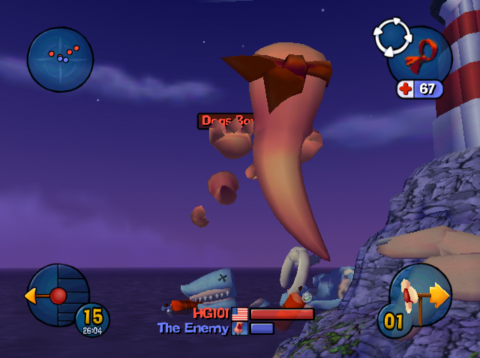 The landscapes themselves are themselves a point of contention, especially those that are randomly constructed. The running theme is they never give you quite enough land to feel comfortable. Either it’s piled upon a handful of islands that reach towards the sky, placed flat so low to the ground that one explosion will expose the water lying beneath, or they might just be a little too small. There are also no cavern levels, although occasionally the generator will leave enough holes within the structures it makes to leave ceilings. It’s generally the pre-built maps that are more fun to play on, often featuring more varied scenery, a little more land to work with, and even small interiors that can help out those who prefer the dark side. Unfortunately, all but a handful of these maps are locked upon beginning a new save, forcing you to play through the single player missions efficiently enough to earn gold medals. 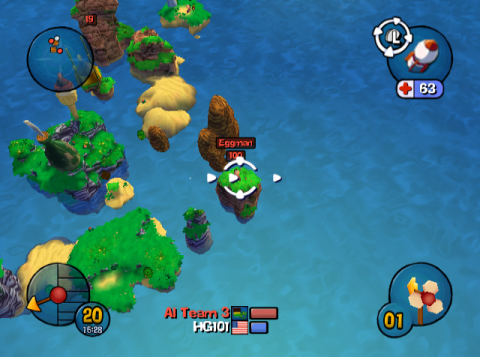 A typical map you can expect from the generator.

The destructibility of the worlds the worms inhabit doesn’t really care over quite as well, either. It can certainly be done, explosions taking out chunks of the landscape and exposing the dirt underneath. The problem is that it explosions generally don’t feel as powerful as they did in previous games. They don’t cause worms to fly as far as they used to, nor do they leave as much of a mark upon the environment. This makes chipping away the environment around enemy worms less of a practical strategy, especially since you can’t afford to waste a sure shot with how difficult aiming can be. Trying to create tunnels to engage in darkside play is also far less practical, especially since the cutting torch and drill couldn’t make it to this game. 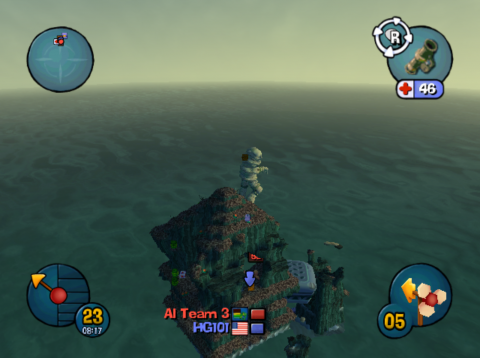 At the very least, the game’s style has transitioned to 3D fairly well. The art style is appropriately cartoony, although the colors tend to look somewhat washed out, something not helped by the typically overcast skyboxes. The worms themselves come through perfectly, featuring a design with a larger head, with eyes and eyebrows to match. Because of this, they’re even more expressive than before, with even more animations to react to situations that occur throughout the game. They shake their fists when they take damage, tremble with fear when at gunpoint, and applaud themselves on a kill. For everything else the game doesn’t do quite right, it’s surprising how well the game’s wacky style pulls through without any problems at all. 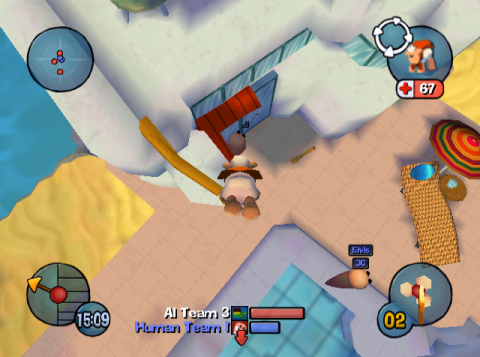 The island resort is definitely one of the highlight premade maps.

Overall, it’s difficult to recommend Worms 3D, especially since its direct sequels would make it more or less obsolete. The gameplay that works so well is still there, it’s just buried under an assortment of complications that are nothing more than the nature of the third dimension. It’s an interesting experiment, at least, if not a very successful one. The game has never seen a modern rerelease, leaving the easiest way to play it to be one of its console ports. The PC version is almost identical, aside from the mouse doing its best to function more like an analog stick and becoming very uncomfortable in the process. The PC version was also the only version to feature online play, but since that required Gamespy, that feature is long gone.