Despite the Dreamcast’s online capabilities, its port of Armageddon only allowed for gaming with local players. And so it was that a new Worms game was made to bring the joy of online wormage to players of Sega’s console. With the demise of that machine fast approaching, however, World Party wouldn’t be a Dreamcast exclusive for very long. Even if it was, it wouldn’t have been a great loss, as there’s not terribly much added to this game since Armageddon. In a time when connecting to the internet through a Dreamcast is a difficult task, to say the least, this makes this product somewhat unnecessary.

One somewhat interesting feature is the Wormpot, which allows for up to three modifiers to be applied to an upcoming match. Some are simple enough in their use, like increasing the damage of certain types of weapons, increasing or decreasing terrain friction, or giving one worm extra health at the cost of reducing the HP of its teammates. Other options make things way wackier – ten seconds of move time might not sound very useful, but when you can use a weapon as much as you want during that time, you can imagine the damage one turn could do. Or you might choose to make all the worms invincible, forcing you to find ways to get them off the sides of the screen as quickly and as efficiently as possible.

Yes, that is an option for blood. It’s not nearly as interesting as that may sound.

Others are a little more strategic, so much so that it’s somewhat of a shame they weren’t expanded on in later games. One option is introduce “specialist” worms – with each of your worms only able to use a specific group of weapons. Lose that worm and you lose those weapons, forcing you to try and prioritize the safety of each member of your team depending on what they have to offer. Another modifier requires you to set up a team arsenal before a match, “buying” an ammunition stock that you may have to rely on through the whole match. “Forts mode” in particular would see several reappearances, placing two teams atop two massive buildings standing across from one another, forcing them to take pot shots to take out each other’s cover and get to the worms hiding within. 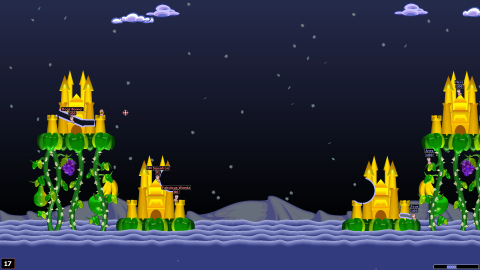 Fort mode is the ultimate test of all your Scorched Earth skills.

Also included are missions for the multiplayer mode, which can’t be played with AI opponents. These are often more complex than simply killing the other team. You might have to reach a certain crate before the other team to achieve victory, or you may have to launch your worms out of a cannon to damage your opponent. They’re neat ideas, offering something akin the alternate gameplay styles fans devised for Armageddon in far more structured manner. Unfortunately, they’re also somewhat more convoluted than the tried and test standard deathmatch modes. On the single player end, there’s also a brand new set of missions, once again asking you to accomplish goals like killing worms and collecting crates under a variety of conditions. A new set of ‘Time Attack’ missions are avaiable as well, asking you to grab a crate as quickly as possible with only the weapons you’re given. 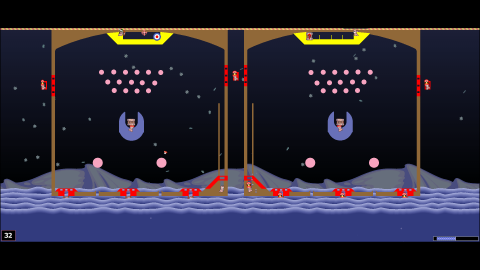 You might think simulating a pachinko machine in a Worms game wouldn’t really work. It doesn’t, but they sure tried.

Overall, unless you’re desperate for a brand new set of single player content to play through, there’s not much from World Party you wouldn’t get from Armageddon. It’s more of an expansion pack disguised as a new game. It’s also far less popular online, most fans being more than content with the prequel. A “remastered” version of the game can be found on digital storefronts, much like Armageddon. It features support for higher resolutions, achievements, support for modern controllers, and cloud saving, which sounds fairly nice. Unfortunately, it also has a reputation for bugs, running poorly, issues with internet play, and doesn’t feature the many improvements from fans added to Armageddon’s rerelease.

The Dreamcast version, the first to see release, has all the same quirks as the system’s Armageddon port. It’s also missing the Wormpot entirely, removing the only reason to play it now that online play on the Dreamcast isn’t very feasible. The Playstation version includes Wormpot, but suffers from the lower resolution graphics of Armageddon’s port.

The Game Boy Advance version has plenty of issues, but it’s certainly far beyond any portable version previously featured in the series. It gets a lot of the broad details right, with play for up to four players, a stripped down Wormpot, the ability to change options the console versions would lock off, and a shocking amount of weapons, considering previous ports. Its biggest problem is that the physics feel very strange, more than enough to make playing this port for long periods annoying. Things that should explode don’t, explosions often send worms flying in the wrong direction, and the ninja rope whips back and forth wildly no matter how much momentum you give it. It’s a much better effort than Armageddon, and comes achingly close to being great, but it’s still not a handheld option one should settle for.

The N-Gage version, sadly lost for all but the rare few that still own theirs, features graphics and sound about on par with the Playstation version. Even more elusive is the Gizmondo port, which has very little, if any, information to be found on it on across the internet. 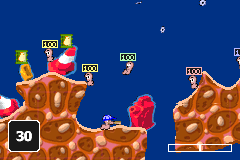