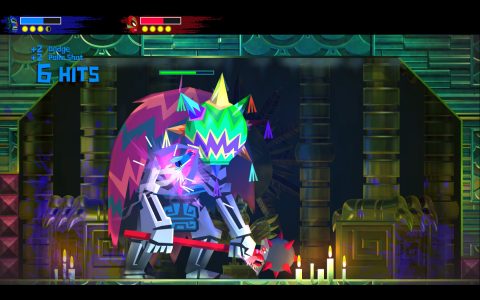 With Metroidvanias being one of the more popular genres to appear in independent gaming, Guacamelee definitely stood out as one of the highlights. Mixing a unique setting derived from Mexican culture and a goofy sense of humor, it definitely stood out along an assortment of other games in the genre. With its fast-paced combat and well-designed platforming, however, it was probably one of the best examples of its kind, and a game that had well earned its rereleases. While its sequel only adds more onto an already solid foundation instead of rebuilding it entirely, it’s still an excellent game on its own merits. On the other hand, most of the few complaints that could be leveled towards its predecessor still remain.

In the previous game, humble farmer Juan took on the powers of a mystical lucha mask to save his beloved, Lupita. The game starts with a brief, SOTN-esque prologue recapping Juan’s final battle with Calaca, the villain who captured her, and Juan’s reunion with her. Seven years later, Juan is now happily married with Lupita. Somewhere in another timeline, however, the dying luchador Salvadore is seeking mystical relics that’ll lead him to a godly guacamole that’ll cure his illness. However, Salvadore’s plan will end up leading to the destruction of the Mexiverse himself. Wearing the mask once more, Juan makes his way into the Darkest Timeline in an attempt to gather the relics first. 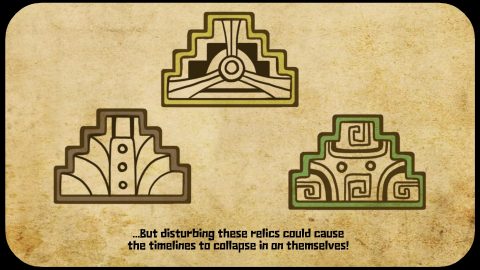 As soon as he relearns all his old moves, of course. It’s a sequel to a Metroidvania, you didn’t think you were keeping those, did you?

The core gameplay of the original game has remained almost unchanged, so if you’re familiar with that, you’ll be set right away. The mix between exploration, combat, and tricky platforming challenges is as well balanced as it was before, which keeps the game fresh. As before, what really sets the game apart from most others in its genre is the way it’s never afraid to let tradition get in the way of level design. Some of the platforming gets even more harrowing than the challenges you’d find in the original game, forcing you to use all your abilities to make it through. Thanks to the frequent checkpoints and your ability to teleport around the map, it never gets too frustrating. 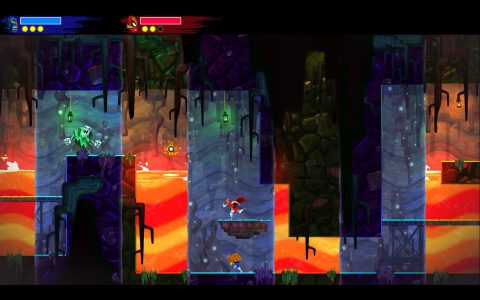 You’ll slowly relearn all the abilities you gathered in the other Guacamelee, putting them to the test in combat and platforming alike. There’s only a couple of brand new abilities to make use of, but both are put to just as much use as everything else in your toolset. The Eagle Jump allows you to fling yourself through the air in any direction with the use of special icons, letting you cross vast distances. The real game-changer, however, is the new and improved chicken form. Formerly just a goofy way to get into small passages, the tiny bird is now almost a character of its own.

The chicken is now perfectly capable of lucha as your human can, which the game will be sure to test you on often. You’ll even earn new, chicken-exclusive abilities, like a diagonal charge attack, or the ability to bounce off of certain bumpers, that you’ll need to use to explore every area. Each time you earn one of these skills for your fowl, you’ll be made to go through a temple that’ll test your ability with them. Both forms will see plenty of playtime before the end of the game, and knowing when to switch will help build your combo counter immensely, as well. The chicken is also needed to discover the game’s most hidden areas, which once again hide obscenely difficult challenges barring your way to the best ending. 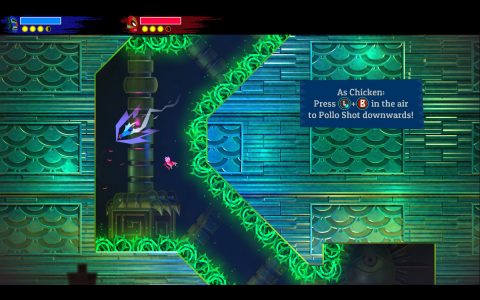 The game’s sense of humor is also just as goofy, if not even moreso than last time. There’s plenty of silly references, like a point where a hidden area asks you to smash up a car, Street Fighter style. Once you’ve done this, the game’s characters then question why exactly you felt the need to do this in the first place. There’s somewhat less of an overuse on memes, as well, although they haven’t been eliminated entirely – especially if you know just where to look. Even in the rare points the game turns serious, it rarely stays that way for long – after a guitar-playing nun explains the villian’s tragic backstory in a cutscene, she casually concludes with “Anyway here’s Wonderwall”. 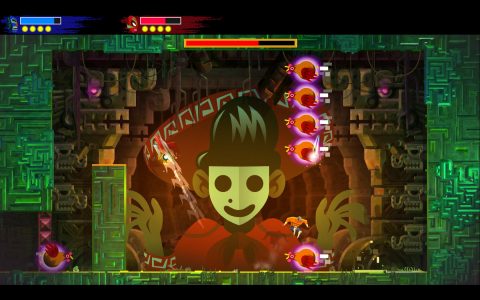 The fact that the game doesn’t innovate much over its sequel could be seen by some as a flaw, but in fairness, the game already had a very solid foundation to start with. Everything the game offers is more of a refinement than a true evolution. At the very least, the colored shields certain enemies have are altered to be more visible for the colorblind – one of the original game’s greatest issues. The only major flaws of the original game — points when the platforming requires a little more manual dexterity than everybody may be able to offer, and boss fights that just lack a certain excitement — still remain. Otherwise, if you enjoyed the previous game, you’re only going to find more of what you love.