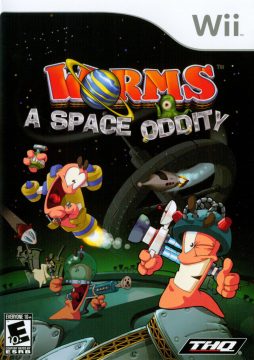 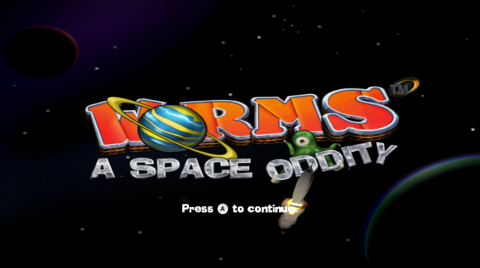 When Nintendo’s Wii hit the scene with its family-friendly appeal and highly-marketed motion controls, it would be no surprise that a lot of smaller developers would leap onto the opportunity that provided. Team 17 would be no exception to that particular craze, bringing out an entirely new Worms game with a deeper focus on the local multiplayer wackiness that the system excelled at so well. This particular game takes on a “pulp sci-fi” theme, with new environment themes and a coat of paint over the traditional weaponry to match. The biggest new addition, however, is undoubtedly the motion control you’ll now use to make use of every weapon and tool in the game. The motion controls that, of course, can’t be set aside for another control method at all. 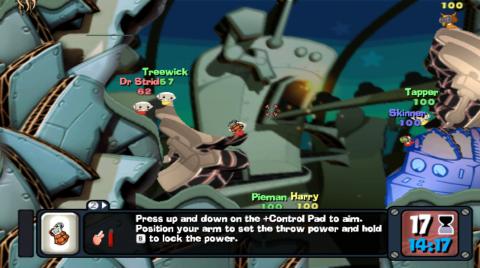 Take the “impact frag”, for example, standing in for the traditional bazooka. To fire it off, you’ll have to first use the control pad to set your aim, tilt the Wii remote back to set the level of power, and then flick the remote forward to actually toss it. The “guided frag”, on the other hand, is used by pointing a cursor onto the screen, firing, and then moving the pointer to control the rocket gently into its target. The most fun of all these new methods would be how you’d detonate the atom pack, the stand-in for the dynamite – by holding the Wii remote on its side and pushing downwards, just like a plunger. Unfortunately, as is often the case with the Wii’s motion sensor, actually performing the action you intended isn’t always what actually happens. Blowing yourself up with your own weapons is frustrating enough, particularly more so when it’s the fault of the controls than your own stupidity. 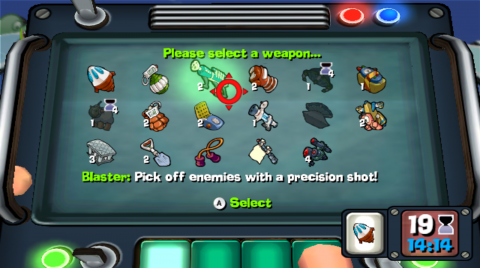 This is all you’re getting, no matter how hard you waggle.

Perhaps due to the time spent implementing the motion controls, the weapon selection is also far more limited than you’d expect from your typical Worms games. Nearly everything you’ll find has an equivalent of something you’d be use from the original Worms, with some minor gameplay tweaks. In total, there’s only about ten weapons and four tools to make use of, without even series staples like the ninja rope and kamikaze to make use of. ((Then again, trying to imagine how the ninja rope would function with motion controls is something best left unconsidered.)) It certainly emphasizes that this game in particular isn’t meant to be a real strategic exercise, since the ‘fun’ will more than likely come from watching your friends mess around with the controller. 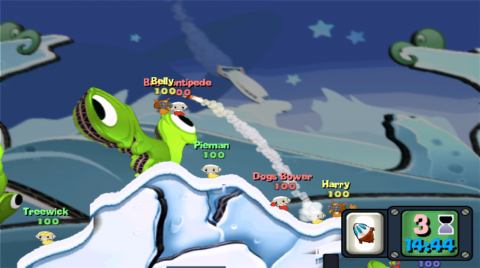 When it comes to turn-by-turn gameplay, however, the overall game feels most similar to the Open Warfare games, questionable physics and all. If you don’t have any local friends to play with, you’re out of luck, because the game lacks online multiplayer of any kind – apparently because Team 17 said that the game was just more fun with local players. Probable excuses aside, there’s also a standard story mode, split between deathmatches that give you limited weaponry and more puzzle-focused levels, with CG cutscenes to reward your progress. Making your way through the story mode also unlocks minigames that can also be played with friends. None of them are particularly exciting – things like simple racing games or shooting galleries, but they make enough of a distraction from the mediocre main game. 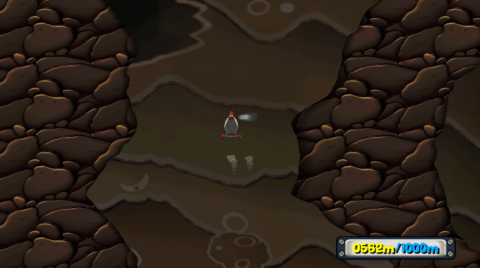 Overall, A Space Oddity makes for a rather forgettable entry overall. It’s best played on real hardware and with a pack of very patient friends, otherwise the motion controls will tend to hinder the fun more than they’ll help. It’s a noble effort at trying something innovative with new hardware, something which the franchise could always do with more of. As a game, however, it’s far too limited to be much more than a novelty.