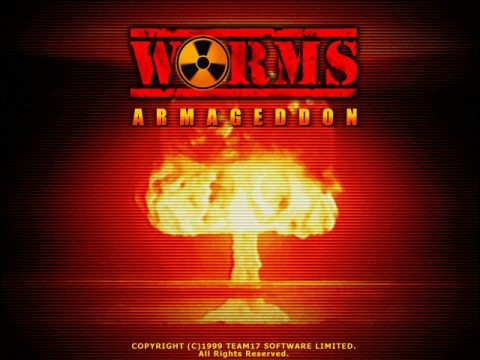 At a casual glance, Armageddon won’t seem terribly different from the game that preceded it. Ask around, however, and you’ll find many fans who consider this particular Worms game to be the peak of the series. It’s often considered the gold standard of the series, the game to which all other entries are compared. Given that it has the extremely solid Worms 2 as a base and only adds further polish and content on top of that, it’s not difficult to see why. If there’s any point to enter the franchise for the first time, it’d certainly be a smart decision to choose this one.

Just about everything from the prequel’s base feature set has made a reappearance, with the only real casualty being the ability to tweak every weapon’s exact firing details – instead everyone has a single variable for ‘power’ that ranges from a zero to five scale. Just about everything else can still be altered, albeit with usually far less granularity as offered before. You can no longer, for example, adjust the height the water level rises per turn during sudden death by the number of pixels. Returning from previous games as well are the ability to save and choose your own gameplay styles, although previous games have been condensed down to a single “Retro” scheme. Making up for these admittedly minor exclusions this is the ability to have eight worms assigned to six teams at once – although this is far from practical, given how much of a chaotic mess such a match is guaranteed to be. 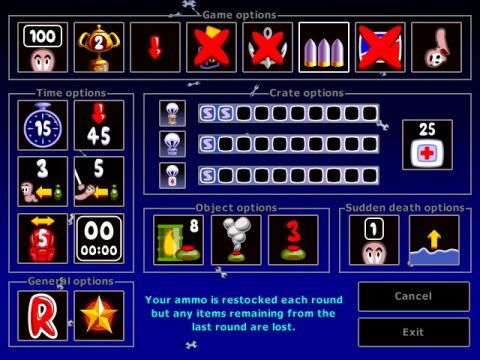 If you’ve already played Worms 2, then you’ve already seen about all the major gameplay tweaks Armageddon has on offer. One small touch is that crates now have a different appearance depending on what they’re carrying – standard wood for weapons, and blue toolboxes for utility items, useful for gauging how badly you might need whatever’s inside. Worms can also now backflip by pressing the ‘straight jump’ button twice, giving them a bigger vertical lift with just enough horizontal movement to reach ground a normal jump couldn’t reach. 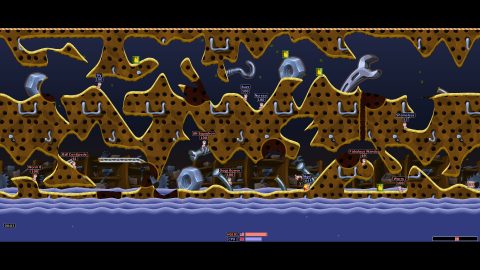 Protip: This is not efficient use of the backflip.

What Armageddon can offer you most of all, though, is weapons – a staggering amount, unmatched by any game before, and exceedingly rarely since. Some of the more interesting tools of death includes the battle axe, a melee weapon that halves the opponent’s HP – making it more dangerous the healthier a foe or group of foes is. The longbow is far weaker than more explosive weaponry, but has far less of a risk of collateral damage, has incredible range, and can be used to create makeshift platforms with its arrows. You might also want to throw out the occasional skunk – it’ll trot forward and leap gaps the way a sheep does, but leave behind a cloud of stench that poisons any worm caught in it, draining their health turn by turn. Each team now also has access to one unique special weapon, offering extra benefits beyond the usual kit, while not quite being quite as devastating as the rarely found superweapons. 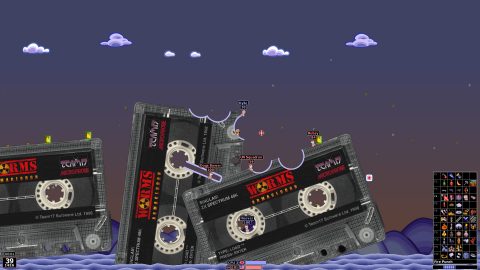 Worms never made it to the Spectrum in any form — but if it was any older, they may have well tried.

The single player modes have also been expanded, with Deathmatch mode most similar to campaign modes past —  a series of battle across random maps, each one adding steadily more numerous and more intelligent opponents on your way to reach the highest of twenty different ranks. There’s also a few new modes, some of which get surprisingly difficult. Training missions give you a certain weapon or tool and challenge you to destroy a certain number of targets before time runs out. There’s also several minigames that give you a single weapon, challenging you to keep destroying targets to extend a dwindling timer. Most complex are the missions, which give you limited weaponry, pre-set conditions, and a simple goal like collecting crates or defeating the enemy. These are somewhat more puzzle-oriented in nature, frequently having you use your selection in creative ways to figure out exactly how to accomplish your goal. 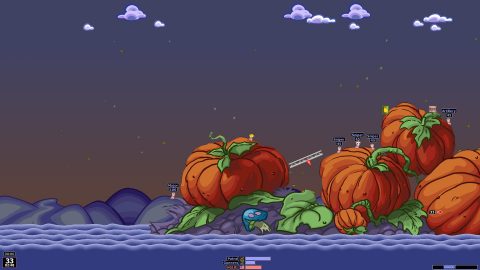 You COULD cross this gap with a girder… but is there a better way?

While this sounds like fun, a lot of the missions can be pretty difficult, especially if you’re a first-time player of the series. This is especially a problem because Armageddon, in a series first, features unlockable weapons, items, and maps. While the pickups you haven’t unlocked have a chance of appearing in crates, to actually have them available in the scheme editor, you’ll have to earn them. To unlock everything for use with your friends, you’ll have to not only reach the highest rank in the increasingly difficult deathmatch mode, but you’ll have to clear every mission, as well as last long enough in each training mode to earn a gold metal. Unless, of course, you hunt around the internet for a way to skip past all that and just play the thing with your friends. 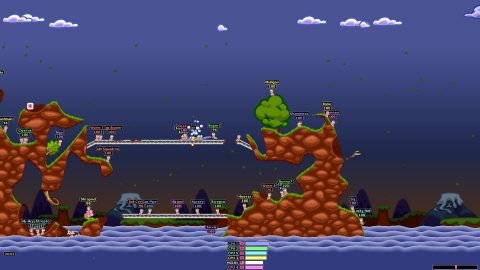 At the very least, frustrating methods of unlocking content or not, many fans would say Armageddon’s multiplayer has never been quite surpassed. Although the community has faded in recent years, it doesn’t take much searching to find what was left in its wake. Check Youtube and you’ll come across footage of tournaments, featuring players of all skill levels. Dig around deeper than that and you’ll find an assortment of fan content – speech banks based around about any media property you could name, thousands of maps to support every type of gameplay, and mods to offer functionality the standard  game doesn’t. That’s just a small portion, however, compared to the the way fans actually play the game. 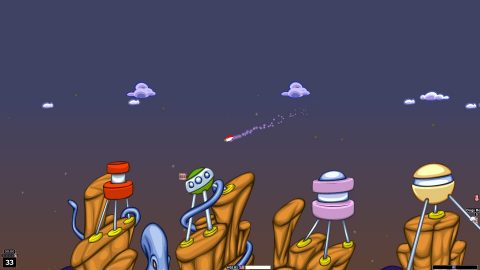 Put your sheep herding skills to the test in the training mode.

Even beyond the standard styles of Worms play, all the tools Armageddon has on offer means that there’s a multitude of other ways to play it. Not only do these unofficial styles use very specific schemes, but each comes with an assortment of rules agreed upon by the players to create new victory conditions. One variation that saw a lot of use in the game’s early years is “Shopper”, in which players start with few to now weapons, having to use their rope skills to collect crates and build up their arsenal. Further variations on this include extra rules like having to touch certain walls before being allowed to attack. While the game can’t keep track of if you actually do so or not, it’s obviously extremely poor form to go against the rules like this. Even wilder rule exist, many of which can be found either on Youtube or within replay files found online.

Armageddon looks almost identical to the game before it, not that it looked that much worse in the period between the two games. A few more landscape styles have been added, with custom maps making a return from their absence in Worms 2. The soundtrack returns to the more atmospheric themes that appeared in the original game, this time featuring musical tracks with more presence, mixed with ambient sounds like birdsong, distant explosions, and demonic laughter. It makes for a nice halfway point between the original’s only occasional bursts of music and the sequel’s somewhat unfitting, more action focused soundtrack. 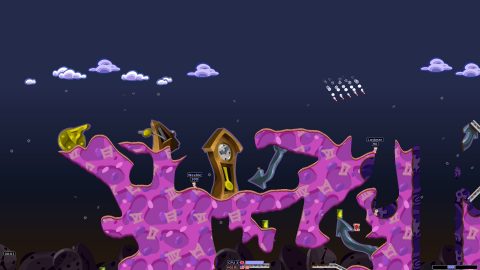 It isn’t difficult to see why Armageddon is so often considered the height of the series. Even if the multiplayer isn’t as lively as it was at its peak, there’s few better ways to experience the series’ brand of strategy, even nowadays. Thankfully, even despite its age, the game is well supported, versions sold on digital storefronts included with enough fan patches to make playing the game comfortable. Modern versions support far higher resolutions, more worms in a match at once, and extra gameplay schemes not included in the original release, making for a clear best option for playing the game. Should that somehow not be an option, Armageddon makes up for Worms 2’s lack of ports easily.

The Playstation version is fairly competent on its own, although it’s missing enough to pale compared to the PC version. The scheme editor has been removed, although there’s many more pre-made schemes to choose from to make up for it. Unfortunately, there’s no way to tell what weapons they contain or what most of the options will be set at a glance, making it difficult to tell which one you might actually want. A few weapons are also missing, like the longbow and anything that makes use of fire physics. The random maps feel somewhat smaller, often to the point where they can even feel somewhat cramped – even with the game only being able to support four players at once.

If you’re playing against the AI, they’re generally much less competent, taking more time coming up with moves, and often skipping their turn for no clear reason. On the aesthetic end, the graphics are blurrier and less detailed, with the various sound clips having lost some of their quality. Speech banks are also now a global option, instead of being something that can be assigned by team. While it sounds rough when you only look at the negatives, it’s still a very solid port that leaves almost all of the underlying gameplay intact.

The Dreamcast version is identical in terms of features, but features much sharper graphics that look much closer to the PC version. It also controls somewhat differently, using the analog stick to scroll the screen, but having to use a trigger as a ‘shift’ button to make up for the loss of the PS1’s two extra shoulder buttons. It also features a cute touch where the weapon you’re about to select plays an animation on the VMU screen.

The Nintendo 64 version was ported by a different team at Infogrames, giving it a different feel than the other console versions. The graphics are somehow even blurrier than the Playstation port, often making the game look like a screenshot that’s been enlarged a little too far. There’s also an odd effect where worms moving through the air flip around on their axis, like some manner of Paper Mario character. There’s less game options to tweak, with the ability to adjust weapon selection having been removed entirely. Many of the weapons are missing in action as well, leaving the selection menu looking somewhat empty. On the positive end, the AI is faster to move and is often more competent than the CD-based console ports. If you can stand all the missing features, the basic gameplay still holds up, if somewhat less so than other versions.

The Game Boy Color version is somewhat like the original game’s Game Boy port – it’s impressive that it exists, and it’s at least closer of an experience than that version. Unfortunately, there’s an incredibly long list of issues that prevent this from being worth any serious time. Only two players are allowed, there are no single player modes on offer, the list of weapons is almost as short as the original Worms, and the physics are nearly unrecognizable. True, it’s a port for much weaker hardware, but it clearly couldn’t handle the game as intended, and it’s almost a little cruel to see the handheld even be forced to attempt it. The only real positive about this particular version would be the various art pieces that start off a match, featuring the worms doing their goofy hijinks. 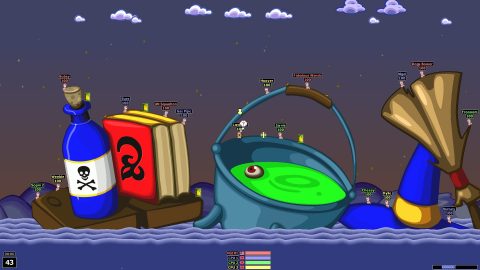 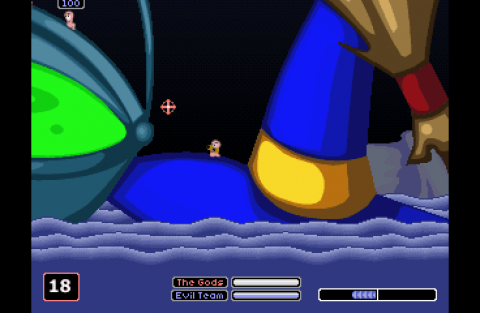 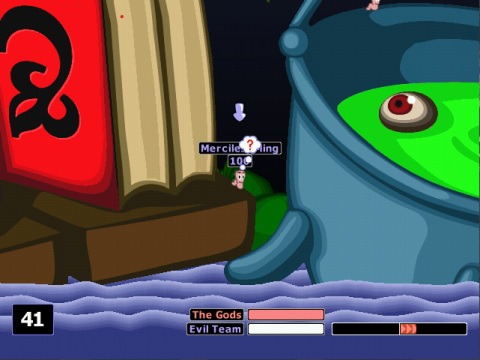 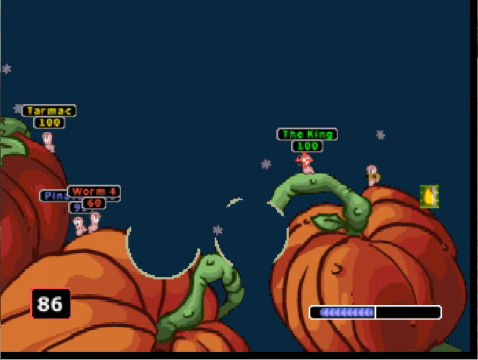 Just some of the art pieces exclusive to the Game Boy Color version of the game.