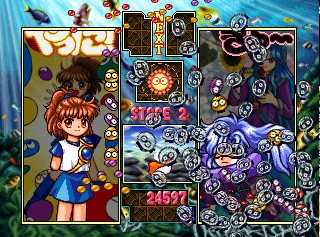 The pun in this title focuses on the word “SUN”. The plot revolves around the sun – Satan (voiced by Masamitsu Niitani himself!) enlarges the sun to make the climate warmer so that he can have women flock to him, after getting the idea from a pamphlet. “Sun” also sounds like the Japanese word “san” for three, since this is the third game according to official numbering.

Since Compile wanted to continuously add to the series, the newly introduced main mechanic here is also focused on the sun. It builds on the previous mechanic of offsetting, which now makes the sun god in the middle of the screen angry (whether or not you clear the entire queue of Nuisance Puyo), who decides to retaliate by sending down Sun Puyo. The amount you get is equal to the size of the chain that you used to offset. The placement for these Puyo is random, but it is indicated by a ray of light on top of the screen, and they drop right after you set your Puyo down. Sun Puyo are similar to Nuisance Puyo in the rule that they can only be cleared when a group of Puyo next to them gets cleared. However, once a Sun Puyo is cleared, it powers up the strength of your chain quite a bit. 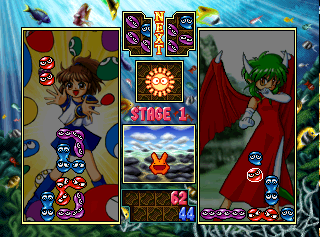 Although it sounds great on paper, this mode was met with mixed reactions, mostly negative, because this mode changed a lot of the fundamentals of a regular match: For starters, when both Nuisance Puyo and Sun Puyo are queued up to drop at the same time, Sun Puyo come first. That means that if your opponent has Nuisance Puyo ready to drop, but a Sun Puyo ready to drop as well, the Sun Puyo would drop, and then the opponent basically had a free turn to prepare himself against those Nuisance Puyo. Thanks to the Sun Puyo that dropped down, there was a high chance that your opponent could just negate your hard work and make it even worse on you.

Furthermore, when an offset happens, Sun Puyo are sent to both players, which means if you didn’t fully negate the Nuisance Puyo ready to drop down on your board, then your opponent had an even better chance to make you lose. Puyo Puyo Tsu actually reworked and lessened the power of chains to give players more of a chance of a comeback, so a new mechanic that just increased their power this immensely wasn’t exactly a welcome addition. On the other hand, since the places where Sun Puyo drop are random, there is a good chance that, sooner or later, one or more would drop in just the right spot to completely ruin a chain that you were working on. Getting an “all clear” doesn’t give you a boost to your next chain the way it did before. Instead, it now also sends you Sun Puyo, based on the chain amount that got you the “all clear”. Since that usually happens early in the game with small chains, it doesn’t really help all that much – this rewards players less for thinking strategically.

All of these points add up to make the flow of a regular match a bit too fast, with little to no comeback potential once one player got ahold of some Sun Puyo in concenient positions. To provide some perspective, a single Sun Puyo added to a three chain sends around as much Nuisance Puyo as a five chain does. Since the required chains for victory are lower, the length of a match is greatly reduced. 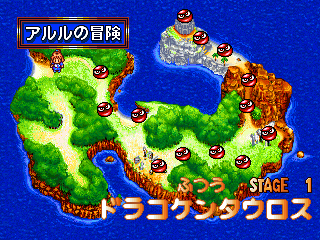 Compile also decided to add a mission mode for old time’s sake, but added upon it by making a competitive mission mode, where two players can battle and see who can complete a series of missions first. Endless mode is here as well, of course.

Once again, there’s also a story mode. It offers three paths, each with its own difficulty and protagonist, a first in the series. Easy mode stars Draco as she decides to deal with the rising temperatures by getting a tan (and then burning herself in the process), putting her through three stages aimed to ease new players into the game. Hard mode stars Schezo as he decides to confront Satan head on, putting him through eight stages. If you don’t use a continue, you get to fight Carbuncle at the end, though this doesn’t affect the story at all. Normal mode stars Arle again, but for some reason she has more stages than hard mode does – a total of thirteen. 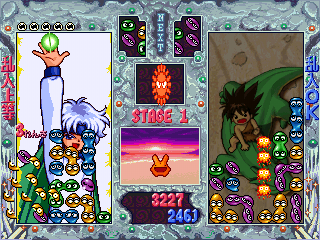 This way, you get to finally see things from a perspective other than Arle’s, so there’s more fun to be had in the dialog. Speaking of which, it’s obvious that Compile had much more fun with this, an there’s a lot more humor. Since it rarely focuses on the plot so much as the characters themselves, it’s sort of like watching a comedy routine. There are even some neat quirks in the rest of the game as well; the first opponents of the easy and normal modes move Puyo from side to side slowly before finally dropping them, as if they’re dizzy from the heat. When selecting a difficulty, the two characters that are not selected look quite dejected, while the “chosen one” takes a sort of empowered pose. Unfortunately, compared to Puyo Puyo Tsu, all three quests are quite linear (and with less opponents to face overall), so the game is a bit on the short side.

A man who always wears a bag with glasses over his head. For some reason, he always cosplays as Arle, the only difference being that he has a red gem instead of a blue gem on his armor. It’s actually so weird it’s humorous, which is why it’s sad he doesn’t make many appearances in other games.

She’s a maid, but it never seems like she’s employed to anyone in any of the games she’s in. Nonetheless she takes her self-imposed duties seriously: in this game, she’s sweeping up a rock path and gets mad at Arle for walking on it, even though the purpose of the path is to get walked on.

Not Komodo Dragon, but Kodomo Dragon – Kodomo means child in Japanese, so it’s actually a clever play on words since it represents the inseparable pair. The child speaks and dresses like a caveman for some reason.

Instead of being focused on pollination like a normal bee, she really, really loves to sting people with a comically large syringe.

Quite an interesting character – his shtick is that he levels up by killing Puyo, allowing him to transform into an adult. After time passes, however, he turns back into a child. He’s Schezo’s opposite, since they share many similarities: Lagnus is a Light Warrior while Schezo is a Dark Wizard, they both wield swords, etc.

Since the game was released for a new generation of systems, Compile had more freedom with their technology, and it shows. Not only is every line in the game voiced across all ports, but characters now show up on screen when casting a spell with a three chain or more, or when they get hit with at least a line of Nuisance Puyo. They also have unique lines when Nuisance Puyo drop, as well as victory and defeat quotes. Finally, every last character has their own unique background for battle – it’s quite obvious to tell that Compile didn’t pull any punches with this installment, adding in as much as they could. Every port of the game is pretty much the same in terms of graphics, too – the only difference you’ll see aside from the N64 version lacking an animated intro is what console is shown during the menus.

Pocket Puyo Puyo SUN was finally released on the Game Boy Color, alleviating the identification problem the previous releases had. Although there are still some notable flaws within the game itself, it’s still a welcome improvement. The music quality seems to have taken a dip in between games – many of the songs lack the power that the previous entry had, though they at least aren’t terrible to listen to. This is most likely due to space limitations, as the port retains pretty much every feature of the original. You’re still able to play through the story mode with the exact same opponents and player characters, even though the cutscenes have been watered down to just a portrait of your opponent with a text box – there’s no motion at all, so it’s a bit hard to get invested. As to be expected, the ending cuscenes are toned down as well, as they’re pretty much simple slideshows.

This port unfortunately doesn’t add much to the game. One odd change to the gameplay, however, is the return of the power boost for an “all clear”. You still get Sun Puyo on top of that, so matches can be ended even faster than in the arcade and home versions.

The mission mode meanwhile underwent some changes to make the process a bit more difficult. Although it is still about clearing an endless array of missions until you fail, you’re now tasked with clearing them in random sets. Also new to this is a timer; running out of time causes you to fail, and if you fail enough times in a set, mission mode ends. However, clearing the required amount of missions causes you to “level up”, getting a new set of missions to clear, and refreshing your amount of allowed failures. This all serves to make mission mode a bit more risky since there are more ways for you to lose.

Overall, Pocket Puyo Puyo SUN isn’t a bad port, but there’s nothing outstanding about it, as the mission mode change is admittedly a rather small one, and the all clear bonus doesn’t help the fast-paced nature of the game at all. 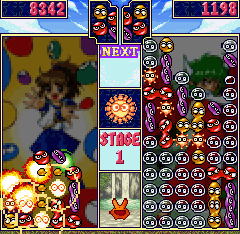 Puyo Puyo SUN is a passable game, even at its worst – its main problem is that matches can go by a little too fast at times, thanks to the Sun Puyo giving players a big advantage. As for its influence in the series, it didn’t nearly have as much impact as Puyo Puyo Tsuu did, seeing how Compile took out the gimmick immediately afterwards.