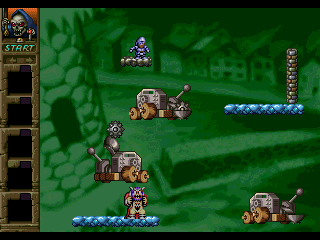 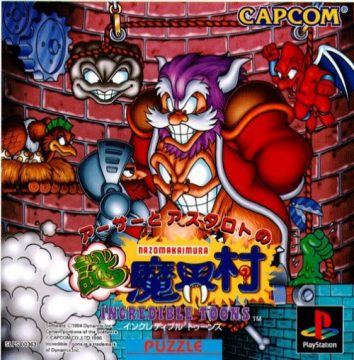 Back in the early 90s, Dynamix released a popular puzzle game called The Incredible Machine. In each stage you were given a simple goal – say, shoot a basketball into a hoop – and were challenged to construct a machine with a number of selected parts. It was all inspired by Rube Goldberg artwork, featuring overly complicated but amusing chain reactions. In the early stages, the machine was practically finished for you, and you just needed to fill in the blanks. Naturally, it required far more creativity in the later levels. Eventually, Dynamix created a sequel called “Sid and Al’s Incredible Toons“, which was basically the same game, just with goofy cartoon characters. 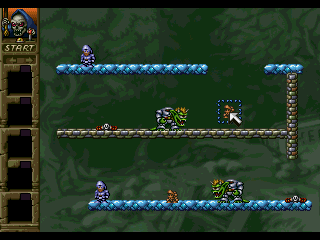 For whatever reasons, Capcom licensed this engine, plunked Ghosts ‘n Goblins characters into it, and the result was Arthur and Astaroth’s Nazo Makaimura: Incredible Toons (“Puzzle Demon World Village”). It stars cute, chibi versions of the cast, including Arthur, Astaroth, Red Arremer, the Grim Reaper, the first level boss from Ghouls ‘n Ghosts, and others. It has many items from the game too – for example, in order to get Arthur to move, you need to lure him with an armor power-up. All of this features a variety of remixes of the standard theme song, along with an intro almost exactly like the arcade games. 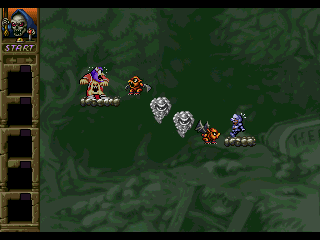 The goals in the beginning of each level are in Japanese, but they’re usually easy to figure out with some experimentation. Some of them can get a bit odd though, especially when you’re tasked with killing Arthur to win a stage, which seems unnecessarily cruel. As a game, it’s pretty difficult and really only for the most diehard puzzle fanatics, but it’s an interesting curiosity for a Ghouls ‘n Ghosts fan.