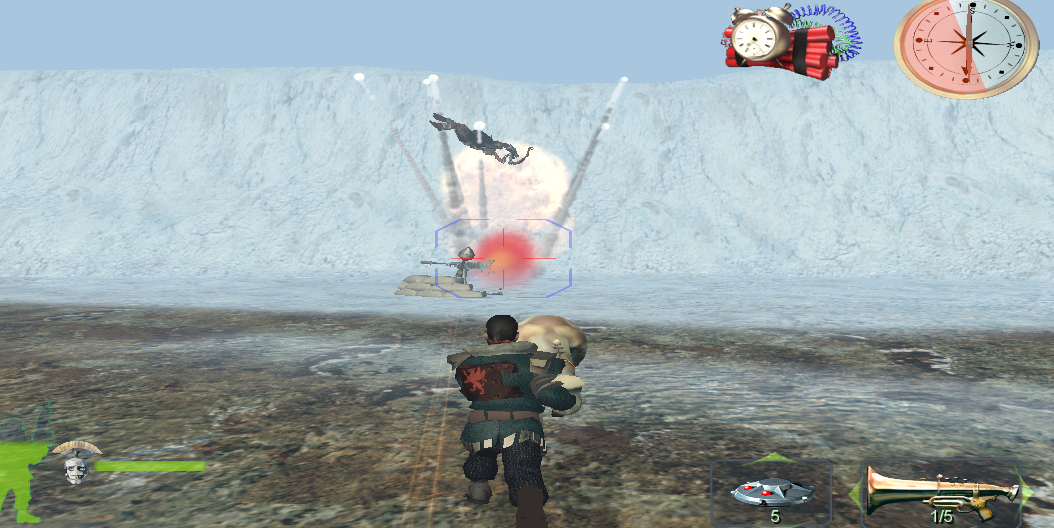 Perhaps two of the most unlucky studios in the history of gaming are Shiny Entertainment and Planet Moon Studios. Shiny gave us Earthworm Jim and the original MDK, but the Enter the Matrix disaster basically ensured they wouldn’t be sticking around for the long run. It seems some of the staff either saw the writing on the wall, or simply had their own goals, as studio members Nick Bruty and Bob Stevenson formed their own studio in 1997 and proved to be incredibly ambitious in what they wanted to do with games. Unfortunately, after Infected on the PSP (an experimental multiplayer shooter where you could infect other players in multiplayer), their highest success was the poorly received Battle of the Bands on the Wii. Planet Moon disappeared from the stage quietly and with little fanfare, but they did manage to make two notable titles when they started. The first was Giants: Citizen Kabuto, and the other was Armed and Dangerous, a game that can be easily described as a third-person shooter, but describing the details becomes complicated. Perhaps the best descriptor would be…British. Aggressively British. 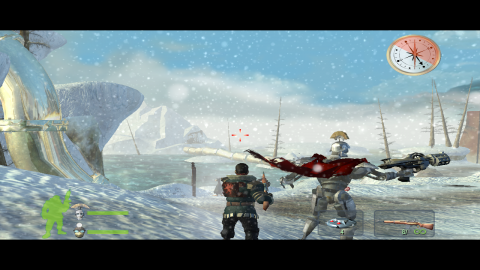 The world of Armed and Dangerous is a bizarre patchwork of WWII era technology, traditional fantasy, and complete nonsense (as in there are just literal nazis hanging around with super German accents working for an English king). It follows Roman and his band of revolutionary thieves, Q the robot, the blind (and senile) seer Rexus, and Jonesy the mole man, as they try to pull off a big heist and steal the fabled Book of Rue in order to maybe save the kingdom. The four bumble around and get into all sorts of hyjinks, but things quickly become more complicated as the evil King Forge is trying to unlock the book and needs Rexus to do so, since he put a spell on it in the first place. Things escalate from there, and the game ends with the vagabonds having to lead a war and fulfill a prophecy. We know the prophecy is legit because it predicts every one of Jonsey’s stupid comments about it and mentions he has a small dick multiple times. Also, Q shoves Rexus up an animal’s ass at one point. Felt that was worth pointing out. It is a very silly game. 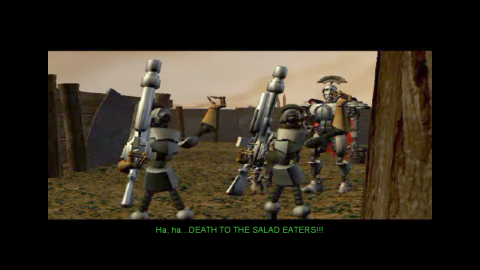 Ridiculous doesn’t even begin to describe. It’s a world of humans, but primitive looking robots are in use, most enemies you fight are orcs with either bows or machine guns, magic exists alongside modern firearms, and you can unlock weapons that fire sharks into the ground and reverse the Earth’s gravitational pull. Cohesive aesthetic theme is thrown out the window for references and whatever the dev team thought would be cool at that time of day. While the Star Wars and Tolkien references are obvious, you may not pick up on the rare death quote where an orc recites a line from Hamlet that was used in an episode of Beast Wars. Torturers don’t realize a head can’t talk if it’s not on a body (perhaps mistaking it for a flesh wound?), a simpleton gets high and sees his father as a talking penguin, and Jonesy finds that a man he was mad with was not making a your mama joke but is actually sleeping with his mother. It is an endless parade of nonsense, some predictable, and some genuinely unexpected because few would even consider writing something so stupid. It’s wonderful. 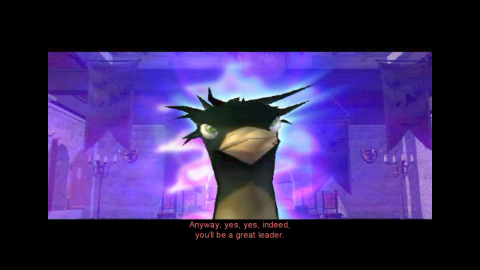 It’s like if every Monty Python sketch was jammed into a generic fantasy novel, and the end result is wacky gags and absurd events popping up in every single cutscene. The cutscene CG has aged horribly, especially the human models, but the writing and great sense of comedic timing more than make up for this. It helps that the cast is fantastic, including the likes of Tony Jay (Shere Kahn from The Jungle Book), Jeff Bennett (Johnny Bravo), and Pat Fraley (the original voice for Krang and Casey Jones in the 1987 Teenage Mutant Ninja Turtles series). Everyone brings their A game, and they sell every strange moment, ranging from using the Jedi mind trick to make nazis think they’re french so they surrender, to meeting a group of crazed basket weaving monks. 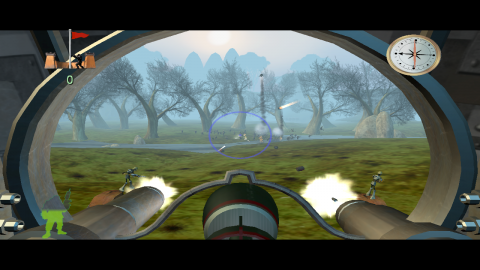 The mechanics themselves are familiar for anyone who’s ever played a pre-mid 2000s third-person shooter. It’s a very “if it ain’t broke” type of design here, with challenge coming from the huge waves of enemies the game throws at you. They go down fairly fast, but there’s a lot firing at you, so instead of the modern cover focus, it’s classic run and gun madness. The graphics were lacking even back in 2003, but that lack of fidelity is used well to pack areas with enemies. That doesn’t really excuse the lacking soundtrack and iffy sound design, though. The game is LOUD, so you better fix that on start, especially if you want to hear voice acting properly. Even with that fixed, sound effects sound way too strong and a bit crushed, a problem lessened in cutscenes. 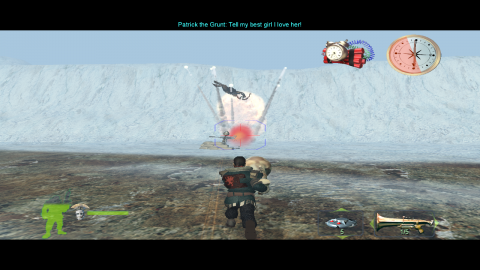 The twists the game adds come in the form of the weapon selection, a jet pack, and tower defense segments. Weapons are given out when you reach checkpoint/save point pubs, which let you take out some new guns or bombs of your choosing from what’s available. The load out changes from level to level, and the standard options of rifle, machine gun, sniper rifle, and disk grenade are usually present. Where things get fun are the gimmick weapons, like the land shark gun, a tuba that blows rockets, a confusion gas bomb, an exploding blade launcher, and other fun things. You don’t get much of any of them, the machine gun able to handle most threats in the game, but these weapons all have some fun situational uses, and can even get you out of a nasty place in a pinch, especially the incredibly overpowered topsy-turvy bomb, the aforementioned gravity reverser. The worst thing about them is that you don’t get more of these weapons to really have some fun. 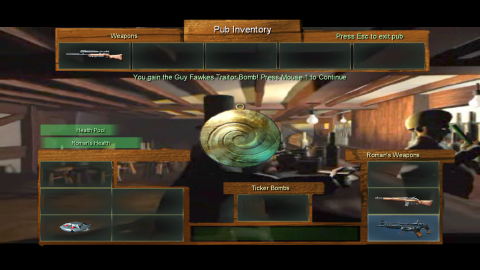 The jet pack segments are easily the game’s best moments. Whenever you have the thing on, you can suddenly hop around the field however you wish, and with enough bombs and bullets, raining death from above becomes loads of fun (if a tad difficult if you want to be accurate). The freedom to scale most buildings in a single bound is intoxicating, as is the ability to position yourself for surprise distance attacks on enemy ambushes. The tower defense stuff, where you turn back siege armies, also makes for a fun little diversion and break from the main shooting levels, allowing for some fun, explosive play once you get a rhythm with the main canon. They appear just enough to not wear out their welcome. 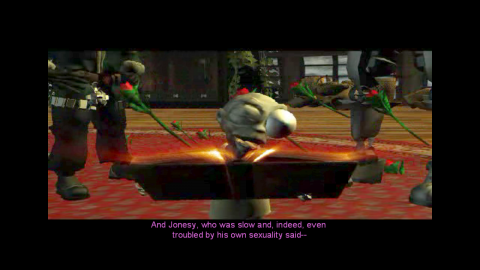 There’s a lot of fun to be had with the game, including unlocking cheats and other extras by finding tokens in the various levels, though it still feels like it’s missing something. The game never has that moment that really tells you that you’ve experienced something special, no incredible boss or gameplay highlight. It’s certainly not bad, though, and a lack of mechanical excellence is made up for significantly by the overbearing (in a good way) personality. There is no other game quite like Armed and Dangerous, maybe not even MDK. It’s an original, and it did some cool stuff nobody had quite done before. Really, that’s the best way to describe the Planet Moon legacy. They may not have succeeded in the end, but they experimented and tried new things, and maybe, just maybe, they helped push the industry in new directions. You can’t take that away from them.