By the tail end of the 1990s, 3D fighting games were slowly but surely taking their place above the 2D games of old. Games like Tekken and Virtua Fighter were equally hot in the arcades and on consoles. While Capcom and SNK were far from abandoning 2D just yet, they gave a few attempts at 3D themselves. Some of these, like Rival Schools and Street Fighter EX, worked well enough, while others, like Fatal Fury: Wild Ambition weren’t as well recieved. Midway had already failed once with an attempt to bring the classic MK gameplay to the third dimension with War Gods, a game that put MK mechanics into an entirely new universe. But with a brand new MK that would make use of 3D hardware, maybe they’d be able to turn things around? The short answer would be no. The long answer would be no, because they just took MK3 and slapped a 3D engine over it. Tired of MK3‘s gameplay mechanics? So was everybody else, as it turned out. Sure, there’s a couple of new mechanics in there, but they don’t actually work well enough, and the underlying gameplay is nearly unchanged from Mortal Kombat 3. The shark, ladies and gentlemen, has officially been jumped.

Shao Kahn has been deposed (although he’s far, far from actually being dead), and for once it seems like Earthrealm is about to have some peace and quiet. That is, until the evil necromancer Quan Chi shows up and releases the fallen elder god Shinnok from his imprisonment in the Netherrealm. Now, with the help of Quan Chi, he’s killed off most of the elder gods and is planning an assault on the realms. With a new threat for the warriors to face, the only way to save the realms is of course to have a bunch of people dismember each other until they run into Shinnok. The tone has taken a much darker turn since MK3, with the series returning to its Asian mythology roots. MK3 wasn’t exactly lighthearted, with the plot dealing with the near extinction of the human race, but this time around, the whole thing feels a lot more gritty and brutal than usual.

The character roster is an equal mix of new and returning characters, with Johnny Cage and Raiden returning from their absence from the arcades. But not all of the “new” faces are really all that new. The thing is, Midway decided there weren’t enough new characters, so they just took some of the older characters and reskinned them into somebody else. With some it’s a little more subtle, but with others, it’s extremely obvious. 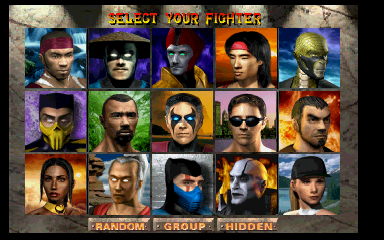 The basic fighting mechanics from MK3 still apply here. You’ve still got the run meter, along with the chain combos. But if you do too much damage with one combo, the words ‘MAXIMUM DAMAGE’ now appear on the screen, and you and your opponent get sent flying away from each other. That’s… a rather interesting solution to the problem so many developers of fighting games face to stop infinite combos from happening. The 3D barely even factors into actual gameplay at all. You can side-step in either direction by double tapping Run, but it only makes your fighter step about an inch to the side, and you can only do it once every three seconds or so. It’s essentially worthless except for dodging the occasional projectile.

There’s also a new kind of throw done by hitting forward and Low Kick next to an opponent, which will usually involve your character break your opponent’s bones. This looks especially silly when you do it with Scorpion, who snaps his opponent’s arm before they calmly sling it back into place. Tanya and Reptile go as far as to snap the opponent’s neck, doing only a small chunk of damage as it twists back to normal. Certain arenas also have objects lying around, like severed heads or rocks, and you can chuck them at your opponent by hitting down and Run over them. It’s too tempting to spam this constant, because the throw comes out extremely fast and inflicts a pretty big chunk of damage. It’s a very useful, if unfair tactic, to win fights by just chucking stuff at your opponent. 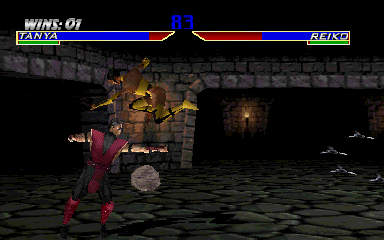 There’s also a new feature where every character has a unique weapon they can pull out through a special input. A lot of characters in the earlier games already had weapons of some sort, but in those, they were mostly used in special moves and combos. Usually, these will have nothing to do with the character. Jax, the military guy with the metal arms, for example, pulls out… a wooden club. Don’t expect weapon combat with the depth of Samurai Shodown or Soul Edge, either. Sure, holding a weapon gives you some different attacks, and some weapons have a special move that only works while wielding them, but they’re still not that interesting. They do, however, have the potential to be very broken, as most weapons have some kind of move that’s easy to spam over and over – especially Fujin, who gets a crossbow that lets him fire off projectiles with just the press of a button. It only takes a single hit, however, to knock a weapon out of a character’s hand, giving the other player a chance to pick it up. 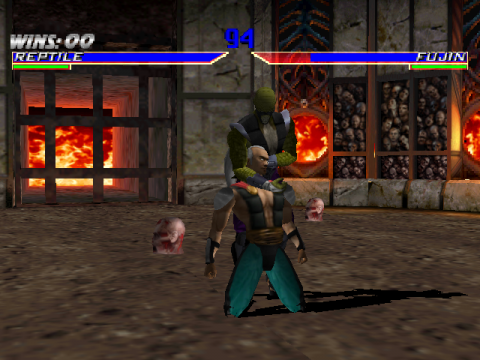 Compared to how games like Tekken, or, for a fairer comparison, Street Fighter EX looked at the time, MK4 is not an especially pretty game. The animation’s rather stilted and jerky, apparently because the animators felt that smoother animation would give the game too much of a different feel from the earlier MKs. Well, they certainly managed to avoid that, at the cost of everything being animated really poorly. One advantage, however, is that this is the first MKgame to have alternate costumes. Most of these are just recolors, but there’s some interesting ones in there, like Johnny Cage getting a James Bond-esque tuxedo. Soundwise, there’s even more gibberish the characters shout this time around, instead of it just being quarantined to Raiden. It gets especially silly when they yell out things that sound like “Oh I’m gonna throw you over there” while performing a throw. Or Shinnok stomping on somebody’s face, causing them to scream out “Ahhhh, my leg!” 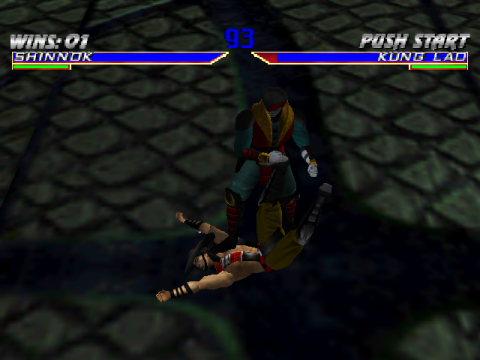 Mortal Kombat 4 was the point when the series was taking a hard turn for the worse, and if you’ve already played UMK3, there’s hardly anything worth seeing here. The 3D doesn’t make the game look or play any better, and the new characters that aren’t just reskins are pretty lame. If you compare this to nearly any decent 3D fighting game of the time, it’s going to get trounced in every way. The good news is this is the final time we’re going to see the aging MK3engine, even if what we’re going to end up with won’t be that much of an improvement.

MK4 was released during a time when gamers wanted more out of their arcade ports. Rival Schools came with a separate disc with new modes and mini games, while other console releases typically came with new characters. The home ports of MK4, on the other hand, can’t quite reach that level of effort. While the home ports manage to keep the smooth frame rate of the arcade, the quality of the models and backgrounds suffer, which doesn’t make the game look any better compared to any other 3D fighter. There’s a new set of alternate costumes and a new arena, but the most noteworthy inclusion is the return of Goro, who serves as the sub-boss before Shinnok. There’s also a way to play as him, along with Noob Saibot. Besides that, you get the standard fighting game modes of Tournament (which was missing in the arcade version), a survival mode, and a team battle mode. There’s also a basic training mode, the first time the series would get one. For whatever reason, while the ports have a move list, this is the only time the game will let you look at them. Thanks, Midway! Very convenient! The N64 and CD versions are mostly identical, only the CD versions uses FMV for the cinematics, while the 64 version just uses the in-engine cinematics of the arcade version. Unfortunately, given that this is late 90s CGI we’re dealing with, the FMV cinematics aren’t all that much of an improvement.

The Game Boy Color version is absolutely atrocious in every way. It’s basically just a reskin of the Game Boy’s MK3port, with some of the MK4 cast slapped onto it. It has all the issues MK3‘s port did, and the extra color somehow makes the game much uglier. There’s only about two songs in the game, with one of them basically being a random collection of notes, while the other is a constant drone. It does, however, have some impressive digitized speech for the Game Boy color. This port also advertises “FMV Fatalities,” but all these do is make a horribly grainy video play in a tiny box. There’s pretty much not a single Fatality in the game where you can tell who’s doing the Fatality, or what they’re even doing at all.

About a year after the release of the home ports, an enhanced version came out on the Dreamcast, renamed Mortal Kombat Gold. Cyrax, Sektor, Kung Lao, Baraka, Kitana, and Mileena have been added back into the roster, and they all have the moves and Fatalities of their MK3 incarnation (or Trilogy, in the case of Baraka). And yes, Baraka can pull out a weapon, just like everybody else. That’s right, the guy with the giant blades sticking out of his arms needs an axe now. Apparently there was also supposed to be a new character named Bellok, but he got cut due to time constraints. 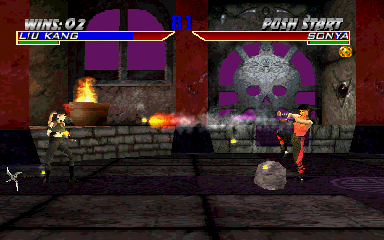 The problem with this version is that it’s apparently chock full of bugs, glitches, and things that make the entire system crash. It got so bad that an entirely new revision had to be released, and not even that could fix all the issues. This version’s probably best avoided unless you really love the MK3 cast. And even if you do, there’s so many fighting games that are worlds beyond MK4, so why would anybody even want this? 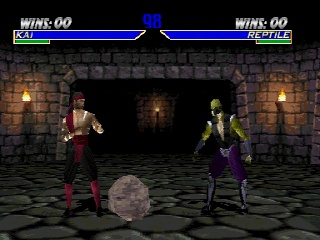 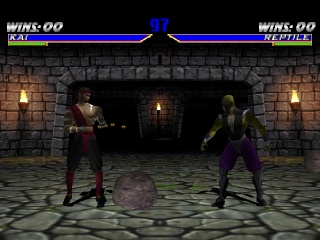