There have countless licensed games produced about the immensely successful Dragon Ball manga by Akira Toriyama. Of the many trilogies and sub-series out there, most tend to cover the latter portion of the series, best known to the world through the Dragon Ball Z TV series. Very few games over the first few arcs, or the ‘Dragon Ball’ era, and they tend to range from middling (the DS Origins games) to downright awful (Shenlong no Nazo, better known as the botched NES localization Dragon Power). 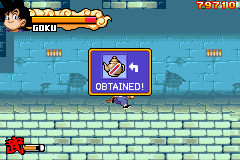 Perhaps the best out of all of them in 2004’s Dragon Ball: Advanced Adventure, a platforming beat-’em-up released for the Game Boy Advance that looks and sounds like it came right out of Natsume’s SNES catalogue (particularly, their excellent Mighty Morphin’ Power Rangers games). Unfortunately, while making for a decent romp, there are quite a few problems that hold Advanced Adventure back from being as good as those games. 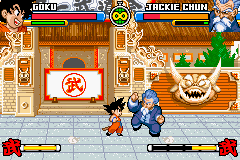 Advanced Adventure has you taking control of series protagonist Son Goku, a powerful young boy who experiences several amazing adventures, as it retells the beginning of the series up until the Piccolo Daimao arc. The story, though presented with some very nicely drawn cutscenes, isn’t much to write home about. It quickly skims through events, characters and emotional beats to the extent where non-fans will be utterly confused as to why anyone is doing anything. As for the fans of the series, the retelling is so dry and uninteresting that they’d be better off reading the manga or watching the show. 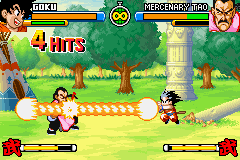 Advanced Adventure is a side-scrolling platformer where the end goal is to get to the end of level, all the while fighting numerous soldiers, animals, robots and whatnot. You have quite the arsenal of moves to help you out; simple combos, air attacks, the ability to use your Power Pole to hit all nearby enemies (though this consumes the power meter at the bottom of the screen), energy blasts that can be charged up and fired. 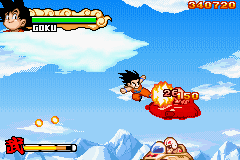 However, you won’t be able to fire the iconic Kamehameha just yet. You’ll need to increase your power meter first, and you’ll be able to do that by finding secret rooms hidden throughout the game. Hidden within are items that increase your power meter, your health meter, along with random trinkets and pieces from the Dragon Ball series, including the seven titular magic balls. What happens when all seven balls are collected..? 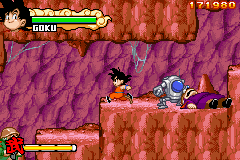 Occasionally, the game will change things up by having you soar across the skies on your Flying Nimbus and taking on enemies in the air, or playing a minigame that recalls one of Goku’s many training exercises from the series. Most notably, however, is a fighting engine that plays very differently from the rest of the game.

For these sections, you fight your opponent in one-on-one combat, doing your best to whittle down their spirit meter (the little green bar under their health) so you can land a few blows. The controls remain pretty much the same, though your attacks are more akin to combos and your energy blasts consume your power meter. 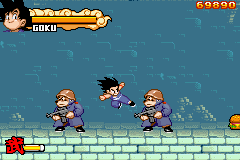 Despite how their overall simplicity, the fighting sections are perhaps the best parts of Advanced Adventure. There’s a selection of different characters you can choose from as you go through the game, the controls work well, and there’s something so satisfying about breaking your opponent’s spirit meter after a long, furious clash that could have gone in their favour. In fact, this fighting engine manages to be more fun and engaging than some of the actual Dragon Ball fighting games over the years (take note, Ultimate Tenkaichi).

As for the core gameplay, it’s a decent romp. The controls are easy to grasp, there’s a variety of different enemies to take on; from mere wolves to gun-toting mercenaries to giant robots; and it’s fun to punch out a whole group of them within seconds before running off to take on some more. Unfortunately, the game simply doesn’t feel as satisfying as it should, and a lot of that comes down to numerous small problems with gameplay and difficulty that all add up as time goes by. 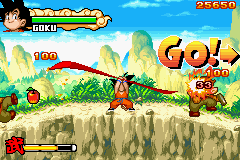 For starters, movements feels a little bit off. You can double-tap the D-Pad to sprint, but that and jumping sometimes don’t respond when you need them to, and you can end up falling into one of the bottomless pits scattered about. And when that happens, you have to go back to the beginning of that section (of which there are usually four or five per level, so checkpoints are pretty sparse).

Not helping this is the fact that combat is pretty non-essential: during the more annoying levels, it’s just easier to run past all the enemies until the game forces you to stop and fight a few waves. Yes, the game sometimes actively forces you to fight enemies before moving on. While this isn’t such a problem in other games, where you have to beat every enemy before moving forward, the way in which Advanced Adventure does so makes for an inconsistently paced game. 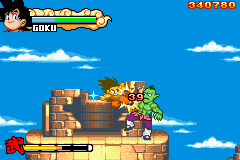 And you will likely be running past certain enemies as fast as possible, particularly anything that shoots bullets or flies about in the air. You get a bit of a stagger when hit by a bullet, but you at least can get hit by four or five bullets before you’re knocked over. But that’s on the ground; in the air, it only takes one hit from anything to send you flying back, and the knockback can be pretty severe – usually enough to send you into a bottomless pit!

On that note, the level design isn’t very interesting. Sometimes, you get a puzzle (though usually no more complex than which door will take you to the next section), a few traps on the way and maybe even an alternate path, but that’s about it. Otherwise, you get long stretches of flat areas with enemies to fight and a bottomless pit or three to jump over. Bizarrely, the level design actually gets less interesting as you go on, to the point where the final level is pretty much one section repeated four or five times without much variation. 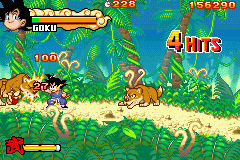 What doesn’t help with this is the difficulty. You have a few difficulty modes to choose from, but it feels too unbalanced either way. The game is either a boring cakewalk with weak enemies, or too unfair with chunks of health being eaten up by tossed grenades or missiles (this gets especially annoying during the Red Ribbon Army fortress, where most of the enemies do this).

It’s such a shame that there’s so many problems, given that there is a good game underneath. Not just in terms of gameplay, but also in terms of presentation. The graphics are really good, with lovely backgrounds, expressive character animations that are as charming as Toriyama’s artwork, and a (mostly) solid framerate that ensures the game at least plays well. 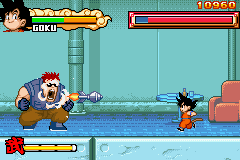 The music is also great, managing to capture the sense of adventure, excitement and mystery seen in the portions of Dragon Ball retold here. The tunes are catchy, the instrumentation is very good (a big praise, considering the GBA’s oft-criticized sound capabilities), and there are a variety of genres used to make each song distinct from one another.

There’s also a lot for people to keep coming back. You can access the fighting game in the menu, do a fighting tournament that basically acts as a boss-rush mode for the different fighters, and even fight against other players. There are numerous bonus modes to unlock, including a proper boss rush, extra minigames, and more to ensure that there’s plenty on offer. 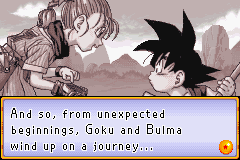 Advanced Adventure has a solid foundation: one that could make for a good, maybe even a great action game that can stand alongside beloved handheld classics like Ninja Five-O, Astro Boy: Omega Factor and Gunstar Super Heroes . Unfortunately, all those aforementioned issues mean that while Advanced Adventure is the best game based on the early days of Dragon Ball, that’s not exactly high praise given the competition on offer. 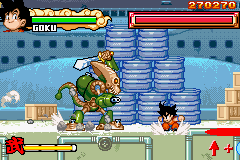 Being a licensed game based on a Japanese property, Advanced Adventure had some slight changes when it brought over to the West. Aside from name changes to reflect those used in FUNimation’s English dub for the franchise, the most interesting edit concerns the music featured in the title screen and credits sequence. Originally, they were GBA renditions of the Dragon Ball TV show’s opening and ending themes, ‘Makafushigi Adventure’ and ‘Romantic Ageru Yo’, respectively. However, there seem to have been some licensing issues during the localization process, since both songs were replaced with music that sounds similar enough to retain the spirit of said songs while remaining legally distinct.