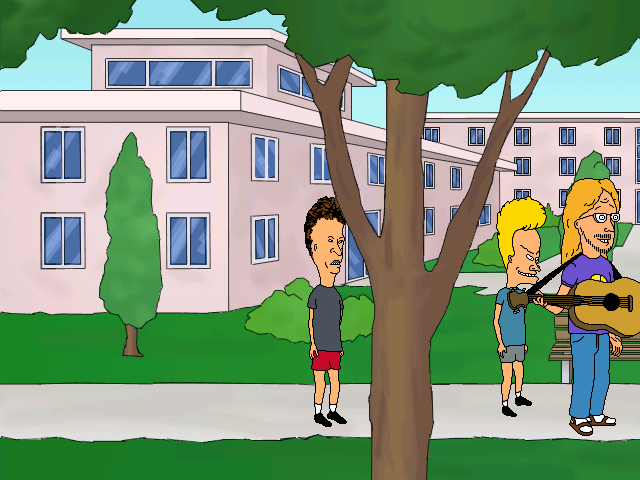 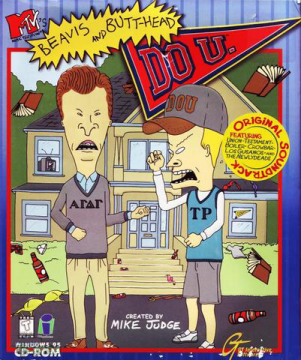 At the time of Beavis and Butthead: Do U’s release, the titular duo was on its way out of the cultural spotlight. The television show had recently ended its run, and since their previous adventure, Virtual Stupidity, their video game appearances had been limited to the less than respectable genres of minigame collection and interactive screensaver. It’s tempting to compare Do U with its classic predecessor, but that would be unfair, both in terms of quality and execution. Virtual Stupidity was set up like an episode of the show and involved a lot of the staff who worked on it. Do U, with the exception of a few perfunctory nods toward the show, is a simpler game with a simple premise: pluck the characters of Beavis and Butthead out of their normal universe, and put them in a new context. In Do U, Beavis and Butthead head to Highland State College on a class field trip and that’s pretty much all there is to it; they’re naturally more interested in scoring with college girls than the merits of higher education, and the game is mostly fetch quests to get into places where chicks might be. 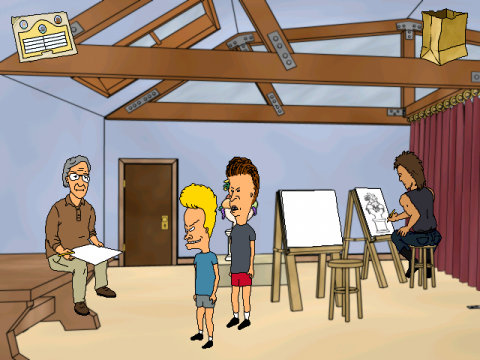 The meat of the game is solid but simple point-and-click adventuring. Moving the mouse over a hotspot calls up a thought bubble with options to talk/use or look, although both actions often have the same result. There’s an unlimited inventory which is quickly filled up with all sorts of objects, some standard, some bizarre; in addition to normal things like a pair of scissors, at one point Beavis picks up a fresh cowpie and adds it to the stash. The puzzles tend toward the easy side, and while there’s an occasional nonsense solution, figuring which object to use on what is mostly quick work. A couple of minigames are shoehorned into the main game, but they’re a mixed bag and don’t add much to the experience. In the first, Beavis and Butthead are forced to serve food in the cafeteria, which is implemented as a very tedious game of Simon Says (and is even less fun than it sounds). The other has Beavis and Butthead running through a frat house shooting paintballs at people. It’s an arcade-style shooting game, and although extremely brief, it’s much more fun.

Besides the titular duo, only a few familiar characters appear – Mr. Van Driessen, their hippie teacher, as well as Stewart, the young kid who foolishly idolizes the duo, and Mr. Anderson. It’s disappointing compared to the huge recurring cast from Virtual Stupidity. There are plenty of stock college-campus-type people to interact with, but they don’t have much personality, and the dialogue and voice acting for these characters is mostly mediocre. Some, like a black woman who appears to have been voiced by a pitch-shifted man, are flat-out terrible. All the dialogue is fully voiced, and there’s usually some music or sound effects to complement each area, which are also hit or miss in terms of quality.

Whereas Virtual Stupidity filled the world of Beavis and Butthead with character and detail, Do U wastes its higher resolution with somewhat dull graphics. There’s nothing terrible about the game’s style, per se; it’s just blandly generic. The backgrounds are all pre-rendered 3D and don’t have much character. They’re also strangely soft, like they were run through a blurring filter, especially in comparison with the hard outlines and solid colors of the characters. The character sprites have a very flat look, like they were drawn in MS Paint. The animation also repeatedly recycles the same few frames, giving it a rough look that’s not very pleasing. 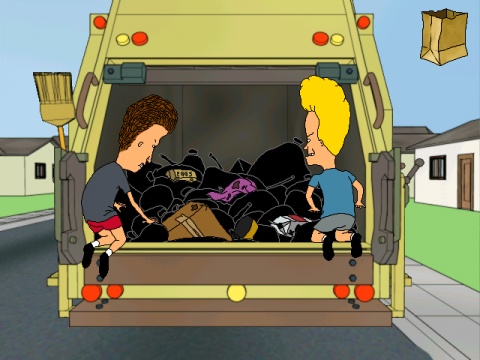 The game falls very short of the high water mark that Virtual Stupidity set in just about every way, but it isn’t a total loss. The script is occasionally very funny, although being a fan of Beavis and Butthead will help the jokes land. The low difficulty level also means that completing the game only takes an afternoon. Ultimately, however, there’s not much to recommend Do U. It’s a middling game without much charm, really only worth playing for the staunchest fans.