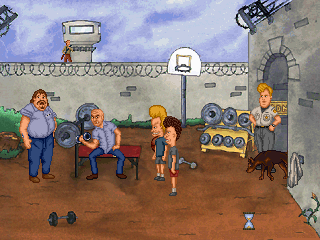 Released at the height of the duo’s popularity, Beavis and Butthead in Virtual Stupidity is the opposite of a typical licensed product, a rare game that nails the essence of its source material. When compared to the pile of cheap, quickly forgotten Beavis and Butthead games for consoles, it ditches their stale platforming and necessarily watered down content for point-and-click-style gameplay that’s much more fitting. The result is a game that feels like a natural extension of its source material. 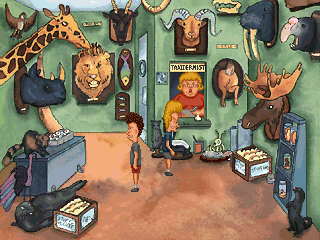 Beavis and Butthead, of course, was an immediately popular MTV show in the mid-90s about two addle-brained, music-addicted high schoolers with little ambition beyond acting like complete morons. Virtual Stupidity even frames itself like an episode of the show: it starts with the “Don’t try this at home” disclaimer and the title card with portraits of the duo cackling in their signature laughs. The objective of the game is as simple as all of Beavis and Butthead’s goals: befriend Todd, a tough guy dropout who wins their respect by kicking their asses on a regular basis. The game progresses like a series of stories from the show loosely strung together, with the titular duo getting into one ridiculous situation after another. On the way to joining Todd’s gang they escape from school, escape from prison, drive a tank, get voluntarily kidnapped by hot chicks and shut in the trunk of a car, and generally annoy people wherever they go. Despite what the cover artwork implies, there’s actually nothing about virtual reality; it’s just a slightly more clever way of saying “Beavis and Butthead: The Computer Game”.

As they proceed through the game, Beavis and Butthead travel through familiar locations like Highland High and Burger World, and just about every character in the show makes an appearance somewhere along the line, including their cynical, bespectacled classmate Daria, the rage-filled Principal Vickers, and their easily-irritated neighbor Mr. Anderson. Events from the show also get referenced throughout, giving fans some added humor. About a dozen animated videos unique to the game serve to break up the action and as segues during the story. 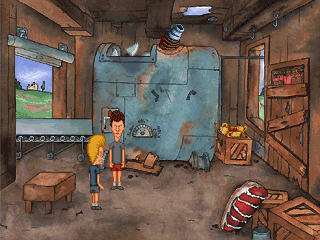 While it runs at a modest VGA resolution, slightly dated for 1995, Virtual Stupidity has well-drawn sprite art and plenty of animation that make it look very much like the cartoon, and almost ranks up in quality next to the LucasArts games. The characters actually look like their TV counterparts, and the backgrounds of each area are faithful to the show’s grainy, watercolor-ish palette. But while the game’s visual fidelity is nice, its greatest strength is the enormous and unendingly funny script, which is completely voiced by the original actors. Written by two of the show’s writers, almost every action in Virtual Stupidity triggers some sort of bantering or quip from Beavis and Butthead. Granted, if you’re not a fan of the source material this won’t change your mind, but fans will definitely be pleased. With that in mind, the quality of the writing is excellent and consistently funny, whether the duo are talking to a character or just screwing around and spouting ridiculous observation at the stuff they come across.

Virtual Stupidity uses a standard cursor-based point-and-click interface: right clicking opens an action wheel with a standard set of actions (and a rockin’ skull and bones graphic, in true Beavis and Butthead fashion), and left clicking performs an action. The cursor icon changes to indicate when you’re over a hotspot or when you’re trying to use an item, making things fairly streamlined and avoiding any “can’t use X on Y” type messages. The puzzles are of the usual object-based variety, like finding a glass eye in a taxidermy shop and figuring out it needs to be given to a one-eyed man met earlier in the game. Some of the puzzles make no logical sense, but don’t feel too out of place by fitting in with the silly, anything goes tone of the show. At one point you need to give a piece of soap to a crazy inmate hiding under a bed, or use a pen to deface a sign so someone will move their car. There is some pixel hunting, but not an excessive amount; a few key objects in the game have multiple hotspots that blur together in a way that makes it tough to tell that they’re discrete areas. At one point in the game, for instance, you need to click the top hatch of a tank rather than the tank itself, or get a piece of gum stuck on a water fountain that isn’t actually visible (you need to click the spout, rather than the body of the fountain, to get it). Thankfully, hitting the escape button allows you to fast forward through the events of an action, making it easy to skip past dialogue you’ve already heard when you’re clicking around, although the lack of subtitles is very annoying.

Supplementing the main adventure are four minigames that have Beavis and Butthead doing things like hocking loogies from a rooftop and shooting tennis balls at yuppies. While entertaining, only the first, placed at the beginning of the game, is necessary to advance. This is a bit confusing, as there’s no indication that playing them isn’t part of some necessary puzzle-solving, but they do add variety amid the object-based puzzle solving.

Even for people unfamiliar with Beavis and Butthead, Virtual Stupidity is worth checking out. It works on its own as a hilarious, excellent game, and sits comfortably as one of the funniest, well-produced, and just plain fun adventures of the mid ‘90s. It was ported to the PlayStation a few years after its release, but only in Japan. This version is completely dubbed in Japanese, but otherwise nearly identical.

While Virtual Stupidity was well received – it won Adventure Game of the Year from PC Gamer magazine – it was followed it up with Beavis and Butthead Do U., developed by Illusions Gaming Company, which did not fare nearly as well.