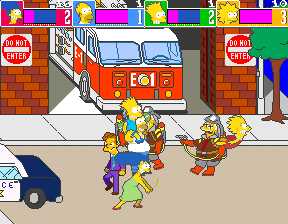 After a few early fumbles, Konami had finally come upon a formula that worked with the success of Teenage Mutant Ninja Turtles. Plenty more games in the same style would follow, and The Simpsons is probably one of the best-loved of Konami’s licensed brawlers of all. Based off of the animated sitcom that needs no introduction besides idly wondering when or if it’ll actually come to an end, The Simpsons is pretty clearly based early on in the show’s run. 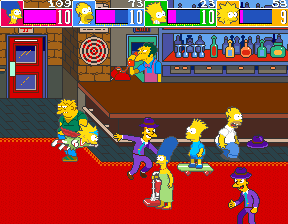 One day, while the Simpsons are strolling through town, Smithers, while escaping from a jewelry store with a diamond, ends up bumping into Homer. In the confusion, the diamond falls into baby Maggie’s mouth. Smithers, in a move that fans of the show may find more than a little uncharacteristic, snatches Maggie, the diamond still in her mouth, and takes off. Now, the Simpsons have to beat their way through an army of Mr. Burns’s purple-suited thugs. It’s a pretty weird plot, sure, especially given the license, but it was early on enough in the show they probably didn’t have much else to work with. The lack of established plot also explains how Smithers became a bomb-tossing, baby-kidnapping maniac, at least.

The remaining members of the Simpson family, Homer, Marge, Bart, and Lisa, make up the four playable characters. By themselves, they don’t vary all that much in terms of stats or moves, although every family member has their own unique weapon. Homer just punches people, Marge hits people with a vacuum cleaner, Lisa has a jump rope, and Bart, of course, gets a skateboard. Like in TMNT, there’s not much to the controls. You have an Attack button, and a Jump button, with a slightly stronger attack done by pressing them both at the same time. It’s not much, but it does mean it’s easy for anybody to hop right in and just start playing.

There is a particular new gimmick introduced here, though, where two family members can move close to each other to perform a special team attack. The parents toss their kids over their shoulders like a human missile, while putting both parents or both kids together let them do a move that lets them move around the screen, damaging enemies by contact. It’s a pretty fun gimmick, especially when you’ve got multiple players joining in, but it’s not always the most practical moves compared to just wailing on the attack button. You’ll also encounter a few weapons, like mallets that you can smash people with, and a ton of the items in the environment, including the Simpson’s own dog, Santa’s Little Helper, can be picked up and tossed at enemies. 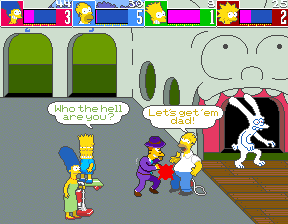 The Simpsons is hardly the deepest brawler you’ll ever play, and success can basically be achieved by button mashing alone. That said, that doesn’t mean it’s not fun, especially when you’ve got multiple people involved. Despite its relatively simple gameplay, the entire game stays fresh the whole way through. Part of it is that, compared to a lot of other games in the genre, it’s paced very well. Most enemies die in about two or three hits, so you never end up feeling like you’re sitting around waiting for the screen to start scrolling again. The game is also constantly introducing new things as well, and there’s so much attention to detail that there’s enemies in the game that’ll only show up for a single screen.

You’ll probably kill them just as quickly as any other enemy, but the effort really shows. The game can be a quarter muncher, unfortunately, although that’s something that’s come to be expected with the genre, especially Konami’s games. This is generally the most noticeable with the bosses, where landing a hit on them will make them immediately counterattack before you can dodge out of the way. While there is the occasional health item, they’re not very common, and they don’t heal you for that much when you actually find them. It’s not exactly to the point where it feels completely unfair, but it does make one feel like there’s not much actual skill involved, for better or worse. 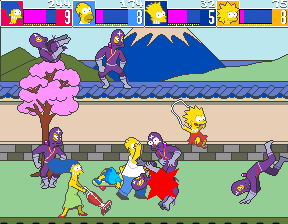 The best part of the entire game, however, is just how well it’s presented. For so early in the show’s run, the developers did a ton of research into making a game that feels like the license the game is based off of. The Simpsons themselves look totally accurate to the show, and even the most generic of mooks fit in perfectly with the rest of the characters. There are a few points where the fact that this game came out so early in the show’s life is especially evident, but that’s forgivable. Although, that still doesn’t explain why you have to take a secret elevator you find in a graveyard to get to Moe’s Tavern.

There’s also all sorts of little touches and easter eggs in the environments themselves. These include cameos of other Simpsons characters in the background, and even a few appearances of Matt Groening’s earlier work, Life in Hell. Aside from that, there are a lot of other cute touches, like the Aliens cabinet that appears in Moe’s Tavern, or the way certain doors will open and send your character into the screen if you get too close to them. What’s also a really nice touch is how much digitized speech they’ve fit in, with the Simpsons themselves being voiced by their actual voice actors. It’s a small thing, these days, but it does give the game a lot of authenticity a lot of licensed games of the time didn’t really have.

Overall, there are many reasons for which The Simpsons has a spot as one of Konami’s best loved beat-em-ups. It may be shallow, sure, but it’s got a fantastic presentation to make up for that. For as little material as Konami had when they made the game, it’s still a surprisingly accurate work that’s still a lot of fun when you have a full four players to enjoy it with. To this day, there’s never been a Simpsons game ever quite as good as this, with only a couple of efforts ever coming close. 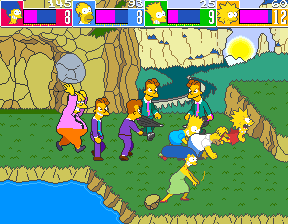 The Japanese arcade version has a handful of tweaks, including a more elaborate scoring system, where various defeated enemies give different values, whereas in the World/American versions, everything will grant a single point. There are also some additional health restoratives, plus a screen-clearing nuclear bomb exclusive to this release.

The Commodore 64 version, released at the tail end of the computer’s lifespan, deserves credit for fitting the entire game onto the system, compromises and all. Unfortunately, it’s not a very good port, and it’s best off left alone. The controls, made worse by using a single button for both attacking and jumping, are pretty sluggish. The game moves pretty slowly, and the framerate tends to chug when there’s more than three sprites on the screen. Some of the SID chip renditions of the soundtrack are pretty neat, but there’s not much besides that to make it worth looking into.

The IBM PC version, while still not quite an amazing port of the arcade game, does a much better job of it than the C64 version does. You actually have two buttons, as opposed to the single button the C64 version gave you, which makes controlling the game a lot easier. The graphics are also much closer to the arcade game, although there’s a lot of missing details from the arcade game, here and there. The only real issue is the almost complete lack of sound, and the soundtrack doesn’t fare too well through the Adlib speaker. Still, for this era of PC gaming, it’s a pretty serviceable port, and way, way better than the DOS port of the TMNT arcade game.

There’s also an iPhone game by the name of The Simpsons Arcade, released in 2009. While Konami didn’t have any involvement with the game, it’s clearly inspired by the original arcade game. This game only has you control Homer, although certain power-ups will bring in the other family members to help you out. A few of the levels are shared directly from the original game, too, although there’s a few new bosses from the show like Chief Wiggum and the Bumblebee Man. Unfortunately, as a touchscreen beat-em-up, it more than likely doesn’t quite measure up to the original game.

The game would eventually see a release to XBLA and PSN, much like X-Men did for a short while. It’s more or less an emulation of the original game, although there’s a few nice features that make it worth looking into. There’s a mode for online co-op, as well as the usual leaderboards and achievements, and it generally seems like a pretty competent rerelease. It also allows you to play either the World or Japanese releases. Unfortunately, the license on The Simpsons ran out, so if you happen to have this game, consider yourself lucky. 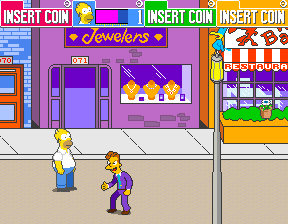 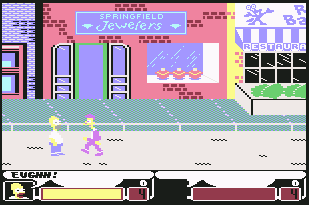 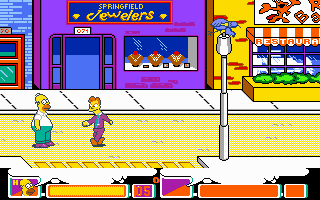