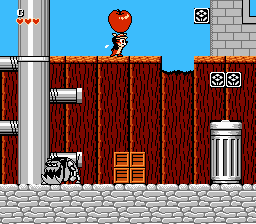 Another cult favorite among those who grew up in the NES age, Chip ‘n Dale Rescue Rangers is another basic platformer based on the cartoon of the same name. The plot for Rescue Rangers is simple. Fat Cat, the main antagonist from the cartoon, has kidnapped the Rescue Ranger Gadget. It’s up to Chip and Dale to save her and administer a severe beating to rotund feline. Monterey Jack, the big Australian mouse, makes a quick and useless cameo to open up a few doors, and Zipper the fly acts as an invincibility power-up.

The best aspect is the two player simultaneous play. It’s a ton of fun to play through each level, picking up boxes and chucking them at enemies. You can even be a jerk, pick up your friend and toss them at obstacles. It’s also a very fast paced game, which adds to the fun. Collecting ubiquitous flower and star icons will make precious 1-ups appear, while you can stack crates to overcome various obstacles. After the first level, you’re taken to a map screen where you can choose the next level. What’s nice about this is it’s possible to completely bypass certain levels if you don’t feel like playing them or if you’re having trouble with one. It’s not a breakthrough in gaming, but the freedom granted is nice. 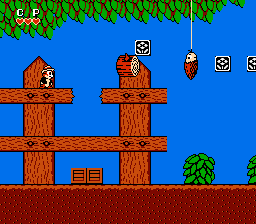 A particularly charming aspect of Rescue Rangers is the size difference between Chip and Dale and the rest of the level. Throughout the game you’ll scramble alongside giant fences, leap across fan-blades, scale countertops and bookshelves, all the while fighting miniature robot mutts and rats. Even simple objects such as running faucets prove to be a trial for Chip and Dale. Apples, practically twice the size of Chip and Dale, can also be chucked at enemies. Carrying these apples causes the characters to sweat constantly, and weigh the little chipmunks down, making jumping difficult. While these are minor details, it shows how much effort the developers put into the game. The bright, colorful graphics, upbeat music, and interesting level design add to the overall experience.

While each level is well-made and challenging, the boss fights at the end fall flat. Each boss fight is a giant sprite that fires a barrage of projectiles at you. All that’s required to defeat each boss is to throw a ball upward into their faces and avoid getting hit. The only difference between each fight is the appearance of the boss and the number of projectiles. This is particularly disappointing, considering even the final boss falls into same pattern. It’s a fun game overall though, especially in multiplayer, even though it’s a bit on the easy side.