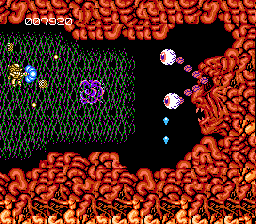 Natsume is a Japanese game developer, founded in 1987, eventually became a prolific developer of quality action games, and partnered heavily with Taito on a number of titles. Their first Famicom game, Idol Hakkenden, was a Japan-only adventure game, but their second game, Abadox, received an international release and left a stronger mark.

The titular Abadox is a planet that has recently been devoured by an giant intergalactic beast known as Parasitis. As a soldier named Nazal, you are sent into the body of the beast in order to destroy it, as well as rescue the Princess Maria, before she is digested within the belly of the monster. 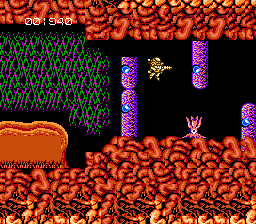 If that premise sounds familiar, it’s because it’s more or less identical to Konami’s Life Force (minus the damsel-in-distress). However, the premise of that game was always somewhat undermined due to its history. It actually began as a Gradius spin-off called Salamander, where the first level had an organic setting, but the subsequent levels had nothing to do with it. When the game was released outside of Japan, it was renamed Life Force, and the Fantastic Voyage-esque theme was expanded to the entire game, with levels given hasty graphical makeovers (a subsequent re-release in Japan made even more changes). The flames on the fire planet were colored blue, as if you were flying through the digestive track. Asteroids were changed into kidney stones. And so forth. It was pretty transparent, especially considering that the NES port, which purportedly had the same concept, went wildly off the rails when you flew through Egyptian-themed ruins (had the gigantic monster swallowed a pyramid along the way?)

Since Abadox’s premise was established at the outset, the levels and their themes are much more consistent than they ever were in Life Force. The first stage starts off similarly, as you fly through space, you observe the wreckage of previous attempts to enter the monster. You fly through its mouth, dodge its teeth, and in a nice extra detail, zoom over its tongue. The level ends with a boss fight against a face and some eye stalks, similar to the one-eyed brain Golem of Konami’s game.

There are six levels total, each with a mini-boss halfway through. As with Life Force, the game alternates between horizontal and vertical levels, though in an interesting twist, the vertical levels scroll downwards rather than upwards. (Which makes sense, considering you’re flying down through the throat and other vessels of the alien.) The rest of the levels aren’t as strongly defined as the mouth in the first area, but there’s plenty of grotesque imagery, the kind that was extremely uncommon on the NES. There are still some mechanical enemies, as it seems like someone built a base inside Parasitis, but most of the enemies are organic, with gigantic teeth, faces, eyeballs, and bones, while most of the areas are through various organs.  In one area, you have to fight against what seems like a gigantic tapeworm, that’s as long as half of the level. The finale is an escape sequence, similar to Life Force but greatly expanded, as you race out (of what is presumably the monster’s final digestive tract) with the princess and out into space. (The princess is naked in the Japanese version, but she got clothes for the US one.)

Another aspect borrowed from Konami’s shoot-em-ups: the difficulty. The arcade versions of Gradius and Salamander were extraordinarily hard, though this was tempered substantially in the home ports. Abadox pulls no punches though – this is one tough as hell game. As with Konami’s games, a single hit will destroy your soldier, and send you back to an earlier checkpoint, losing all of your upgrades. His human-like figure makes him a larger target than most spaceships, though he’s still kinda squat and isn’t a gigantic target as, say, the heroes of Forgotten Worlds or Natsume’s later S.C.A.T.. Gradius’ power-up system also allowed you to customize your power-ups, to an extent, while Abadox works in the more traditional manner, where it simply drops weapons and other items at predetermined points. You never get too powerful – the multiway cannons, three- and-five way, have more range but end up limiting your rate of fire. Other weapons include lasers and homing missiles, predictably. There are little orbs that spin around your soldier, but they don’t increase your firepower and are only useful in absorbing enemy fire that come into contact with them. They’re hardly a failsafe defense though, since it’s easy for projectiles to slip between them. There are also regular shields that can absorb a hit or two. At least you get unlimited continues, plus there’s an invincibility code so you can see the whole game. Unlike Life Force, Abadox is only one player. 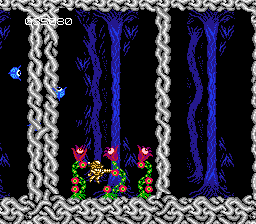 Abadox also sounds a lot like a Konami game, right down to the familiar “pause” jingle, which is intentional – the music and sound effects were produced by Kiyohiro Sada, a former engineer at Konami who worked on NES titles like Contra and The Adventures of Bayou Billy. The compositional quality isn’t quite up to Konami’s standards, but it’s still pretty decent. Subsequent Natsume NES games developed their own sound and style.

Although Natsume published the game and did a bulk of the production, there were a few other companies that helped with the game, including Dynamic Kikaku, the company owned by famed manga artist Go Nagai. Also listed as a producer is another artist named Tadashi Makimura (AKA Doronpo), who had previously worked as an illustrator on some of Nagai’s works as well as some text adventures with Enix. Before Abadox, he also did artwork for Natsume’s PC88 action game Majoriko Inbizone. His talent is probably the reason why the visual design is as strong as it is – unfortunately, there’s not much artwork available other than that’s in-game and as seen on the Japanese packaging. The most stirring illustrations were the ones created for the NES version by publisher Milton Bradley. This was also the last video game Makimura worked on. 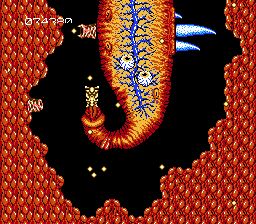 Although it tends to get overlooked when discussing NES shoot-em-ups, Abadox is an excellent game, with incredible visuals, decent music, and some solid level design, only somewhat held back by how extremely brutal it is. This was a good first showing for Natsume, and while some of their subsequent games also played off other, more popular NES games, they still had the design talent that made them stand out from other lesser developers. 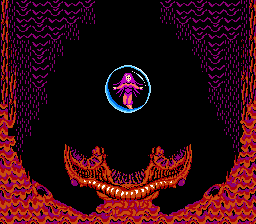 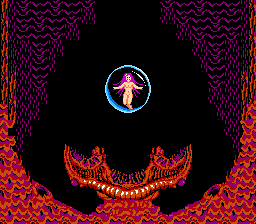