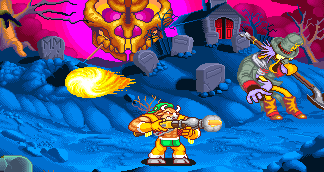 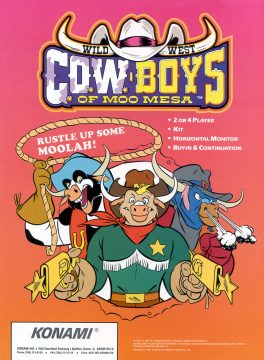 Based off the mostly-forgotten cartoon series about a bunch of anthropomorphic cows in the wild west, C.O.W.-boys of Moo Mesa may as well be a sequel to Sunset Riders. Obviously, this one is a bit sillier… not that Sunset Riderseven took itself seriously. The basic gameplay is more or less the same. There are four characters – Cowlorado Kid, the Dakota Dude, Marshall Moo Montana and a completely new character, Buffalo Bull. (Most of the character names had awful cow-related puns as well.) Like Sunset Riders, two characters wield pistols and the other two wield shotguns. It allows for four player simultaneous action and tons of enemies, naturally. Fitting the theme of the game, there’s stampede maneuver, which can be used to bowl over enemies or break certain rocks. There are also rare bonus weapons which send axes flying all over the screen. The characters all have life bars too, making it a bit easier overall than Sunset Riders. 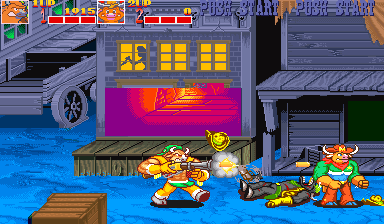 After the first stage, you can choose any stage you like, although there’s no benefit to following them in any particular order. Most of the levels feature two boss encounters which are usually quite inventive, per usual Konami protocol. One is a vulture who uses a shovel, whose backend doubles as a shotgun. Many other ones are bizarre combinations of cows and other creature, like this weird bovine spider thing. (Ryan Brown, one of the original artists of the Teenage Mutant Ninja Turtles comic and creator of the Moo Mesa series, reportedly worked closely with the development team for a lot of these new creations. Like Sunset Riders, there are a few clever moments throughout, like when you past by three identical looking “wanted” posters, only to have the last one spring to life and attack. There are also a few shoot-em-up segments where the cows are carried by some particularly strong birds.

The music is supplied by Michiru Yamane, before she began work on the Castlevania series, although most of it’s forgettable. The background graphics aren’t that much different from Sunset Riders, but Konami’s arcade developers were masters in replicating the look and feel of the cartoons their based were on, and Moo Mesa is no different. The theme is obviously pretty silly – sillier, yes, then even the Teenage Mutant Ninja Turtles – but the sprites are large, colorful, and expressive. It also runs on more powerful hardware, as it uses the same board as the amazing Xexex, although it doesn’t push the visuals quite that far. Yet, despite some of the weirder enemy design, it somehow lacks the punch and charisma of Sunset Riders. At any rate, the only major issue is that many of the bosses were clearly designed to be fought with multiple characters, because they tend to take way too many hits in single player mode. At least there’s a boss lifebar, a rarity in these type of arcade games.