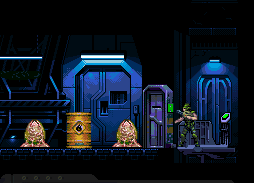 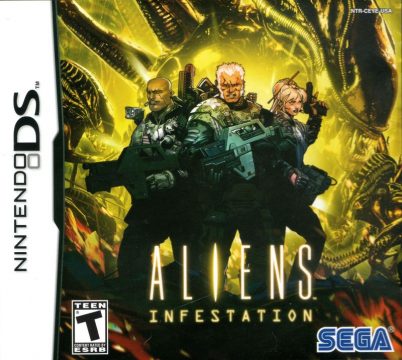 For a licensed property, Alien video games have fared surprisingly well. Every Aliens: Colonial Marines has been met with an Alien: Isolation, or an Aliens vs. Predator. Aliens: Infestation falls happily into the latter camp, with a few frustrating caveats.

Developed by WayForward Technologies and Gearbox Software, and published by SEGA, the game was initially conceived as a Nintendo DS port of Aliens: Colonial Marines, before being cancelled and later revived. Fingerprints of its big brother remain: the Marines in both games investigate the disappearance of a ship called the Sulaco, arriving on another called the Sephora. The characters, however, are completely different.

Corporal John Cameron: The green-armored “Duke” is the hard-nosed leader of the squad who thrives on adventure.

Private Buddy Whistler: “Brando” is a wet-behind-the-ears rookie who has come to prove himself in combat as a “real man”.

Lance Corporal Samantha Johnston: An enigma, the self-styled “Homewrecker” likes to be the first into and the last out of a conflict.

Private Brock Paulson: “Bear” is a gentle giant who is using his military service to pay for his schooling.

Sean Davis: This weasel is The Weyland-Yutani Corporation’s delegate of choice and your main human antagonist. 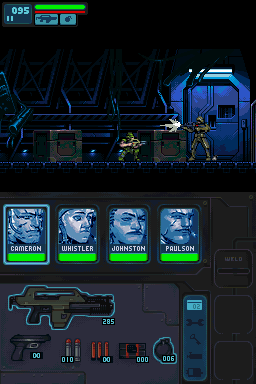 Following on from the events of the movie Alien3, you take command of a four person squad after intercepting a distress call from the USS Sulaco. From there, the mystery opens up, in a story that is generally solid sci-fi fare, even if it hews too closely to character archetypes at times. Of note is the dialogue, which fleshes out the characters you love (and some you’ll hate) with individual flair.

Infestation looks like a run-and-gun, but plays like an adventure horror game. Yes, there are weapons, but try to go in all guns blazing and you’ll quickly become alien food. Xenomorphs will follow you and quickly team up to take you down. Instead, you’ll find yourself inching forward through a maintenance shaft, your radar pinging threats in the vicinity, hoping you’ve got enough vitality and slugs in the chamber to make it to the next save point. It’s authentically Alien, and the game at its best.

The atmosphere, especially in the opening, calls back to the opening of Super Metroid; the loneliness, the eerie ambience, the fear of what lies around the next corner. It can’t be classed as a Metroidvania, though; while there are some optional areas and backtracking, and exploration is encouraged to find extra power-ups and items, it’s too linear to earn the title. 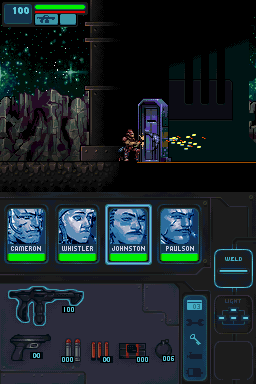 There’s one button to jump, another to fire your gun, a third to use a second item, and buttons to run and roll. The second screen serves as a map and your inventory, but not at the same time; smartly, functions like welding, which leaves you prone, are tied to the inventory screen, meaning you can’t see if anything is trying to sneak up on you. Crouch next to a box and you’re able to fire blindly over the top, key to taking out pesky soldiers. Everything is tight and responsive, and you’ll not fault the controls when you get another Facehugger wrapped around your throat.

WayForward and Gearbox have managed to cram in very detailed and well-animated sprites and art. The grunts’ idle animations, in particular, each convey the individuality of each soldier. Veering from high-tech offices to rooms altogether not of this world, the backgrounds suit the franchise well, the one downside being that, although they look fantastic, they eventually become repetitive.

The sound effects are suitably gritty and punchy, and the music synthetic and otherworldly, with a hint of military drum. Both keep you on your toes, although it wouldn’t have hurt to have a couple more background tracks. The credit music, by Holy Light of Demons, deserves a special mention, only rivalled by the Team America theme in its jarheadedness. 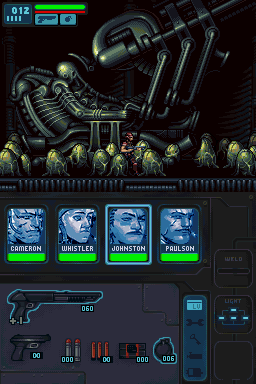 After an early jumpscare with a benign pussycat (repeated later to less effect), you’ll meet your first Xenomorph. They take more bullets and appear in greater numbers than you’d expect and it’s easy to get overwhelmed. The gang is all here, from Drones to Warriors, Facehuggers to Chestbursters, and lesser-known variants like the Gorilla Alien. That’s not your only problem; enemy Synthetics prowl the halls, and U.P.P. soldiers aren’t going to let you take down their cargo without a fight. Slightly disappointingly, every new enemy type is followed up almost immediately with a more impressive weapon, with the amount of challenge rarely varying throughout your play time.

Speaking of weapons, you start off with a standard machine gun, which can be upgraded. Later you’ll happen across a shotgun, chain gun, and a surprisingly weak flamethrower, which is only really good for burning away alien debris that is obstructing doors. Grenades are a lifesaver, and good at clearing out swarms, but be careful you don’t damage yourself as well. You are also able to run and launch into a defensive roll. Both are tied to a short stamina meter, with the roll only having a few frames of invincibility, meaning restraint and timing are the order of the day. The map has many save rooms, just far enough away from each other to ratchet up the tension. On the left of each room you can save at the computer terminal; at the right you can swap ordinance and reload. It’s here the you can swap between your crewmates and refill their lifebars.

Your squadmates act as your lives. When you lose a soldier (and it’s a when, not an if), another member of the platoon will take over from them, and if all four bite the dust, it’s game over. But all is not lost – while traversing the map, you’ll bump into abandoned grunts who will join your team. Should you already have the maximum amount of soldiers, the forgotten fighter will gift you ammo and supplies instead.

When the game deviates from standard action, things come unstuck. A vehicle section where you control a tank with the joypad and a rail gun with the stylus is a chore, the vehicle too big to avoid taking damage. Even worse is a section in zero gravity where you’re saddled with the mooniest of jumps and forced into blind leaps, losing one of your squad to the void if you miss. The bosses are inventive but some are absolute bullet sponges and, without a visible lifebar, it can be hard to know if you’re making headway. 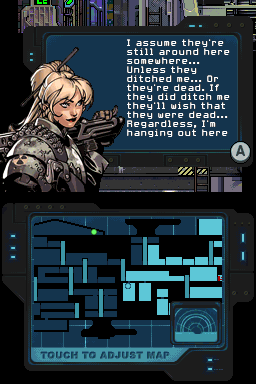 The story is also a letdown. It starts off well and has great dialogue, but doesn’t introduce the main villain until the second half of the game, with the story grinding to a halt after 3 to 4 hours of playtime. The conclusion is unsatisfying, and it feels like the developer either ran out of time or simply lost interest. For your troubles, you unlock character bios of the soldiers you met on the way, and a pinfinger touchscreen minigame that is better than stabbing your own hand.

While there are issues, Aliens: Infestation is a must-play for any fans of the franchise, and is strongly recommended for fans of Super Metroid or the Alien3 SNES title. A spiritual sequel, The Mummy Demastered, based on the Tom Cruise movie, was released in 2017.