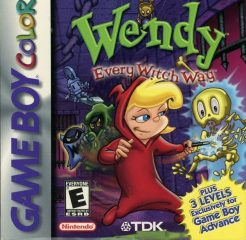 There is a gutter licensed video games tend to fall into. Considering all the faults and issues that can haunt any rushed product, there are other factors to address when a company is tasked to produce an interactive good time. The worst factor to tackle is apathy. Game creators enter the market hoping to make the next great Mario or so epic they dreamed of; little are thrilled to find out that they have to pump out a promotional breakfast cereal tie-in app. For Wendy, it was poised to be a complex uphill battle on all fronts: it’s a licensed title for a portable handheld well into its twilight years (in an age of PS2, no less!) centered around an aged young children’s property barely holding any pop culture reverence at the dawn of the 21st century. Also, it’s kinda a girly IP, a sect of bargain bin fillers that generally denotes 100% safe fun, cheap dull minigames, and themes of ponies, fashion, and shopping. Thankfully, the development was handled by Wayforward, a company that isn’t afraid to try with the lamest of licensees.

Wendy: Every Witch Way stars Wendy the Good Little Witch, a neotenous once-secondary character from Harvey Comics’ Casper the Friendly Ghost books. The game itself was meant to coincide with a planned reboot animated series that ultimately fell through, leaving only this interactive piece of media and a few rare promotional prints. One day the little witch was snooping through her “aunties'” attic when she stumbled across an old chest that held inside magical stones. The release of these stones upsets the gravity inside a floating castle in the sky, causing it to crash down by her house, and only the good mage can set things right.

What sets Wendy from a basic hop ‘n bop platformer, is the gravity mechanic. Essentially, Wayforward took the ceiling-flipping gameplay from Metal Storm wholesale and sold it to unsuspecting parents for their kids. This works heavenly in favor as the mechanic is still fairly fresh and unique even today. Switching gravity is as easy as hitting up or down as you press A; a great pick-up-and-play control setup much like the title it’s influenced by. Wayforward made sure to make the gravity flipping more than a simple gimmick, as reaching the end of each stage of the castle involves plenty of leaps back and forth from the ground and ceiling, complete with tricky placement of spikes and gravity-based obstacles to over(and under)come. Wendy herself comes armed with a wand to fire spells at foes patrolling the area. Collectible stars count as the witch’s health bar and spell power, as each star boosts her wand’s reach and spray to a more potent blast. Take a hit, and Wendy goes down another notch of power. Luckily, every enemy is dispersed with one magic spell blast, regardless of how much star power is backing it. The plethora of enemies also come with varying means to dispatch and interact with by gravity. Spiked blocks and platforms falls counter to or with Wendy with each switch, shielded pig baddies need to be flipped over in order to be stuck, skeletons are quick to hang on the current “ceiling” should you attempt to flip them, and little hooded Jawa-like minions turn red and more aggressive after landing on their heads from a gravity switch. Couple with one-way platforms that need to be hopped from above or below, and the good witch will be bouncing back and forth with her gravity bending prowess to reach each magic stone waiting at an altar at the end of each stage.

Wayforward certainly strut their 8-bit aptitude. Every Witch Way is a graphical powerhouse for the portable much like the rest of the dev studio’s late Game Boy Color releases. While the eponymous protagonist is tiny and simplistic, she is well animated. The rest of the visuals feel right at home with the first Shantae, sporting vivid sprite work and the Bozon’s signature style. The enemies, more adorable than usual, carry a Halloween trick-or-treat charm to them. Backgrounds even implement parallax scrolling along with the minimal foreground layers that are strategically placed in order to not block vital platforming segments. Everything pops out with contrasting colors so the game is highly visible even on the old non-backlit GBC. It’s a shame that the music isn’t up to the usual high watermark the company is known for. The lack of Jake “virt” Kaufman composing is a harsh blow as each audio piece is shrill and forgettable generic spooky tunes, along with Wendy’s jingle theme. Still, the company was able to squeeze in sampled voicework for Wendy to say whenever she collects the stones, stars, or loses a life (“Aw rats!”) The other failing is the artwork of Wendy and her Aunties in-between levels. Objectively, the art itself is digitized immaculately by Wayforward, but the aesthetic is of the simplistic stylized cartoon look of the late 90s/early 2000s that the game was supposed to tie into.

The biggest knock against Every Witch Way is its brief length. As clever as it makes the experience, it’s over after four “worlds” are completed, with only a rock-spewing dragon head as the sole boss. Each “world” runs three levels long with a short horizontal shooter stage where Wendy flies on her broomstick and fires at a paltry assortment of foes slowly floating by. Coupled with the easy-peasy difficulty, and most players will breeze to the ending within less than an hour. That is, unless playing the game on a GBA-compatible setup that unlocks the bonus Advance World, showcasing fancier effects on a starry trio of levels where the challenge ramps a bit higher with insta-death spikes making those occasional gravity switched leaps of faith costly ones. Completing the Advance World earns a special password that starts Wendy with unlimited max magic power.

Wendy: Every Witch Way certainly fits the character Wendy well: short and sweet. With it being put on shelves at a time that the platform’s successor was already out, EWW can be rare to find on its own, though it definitely doesn’t sell as high of a price as another late GBC title of theirs does. It certainly deserves a look at one of Wayforward’s better licensed releases. The fact that is vastly exceeds expectations on a handheld being glutted with dribble based on Rocket Power and Barbie is spellbinding.