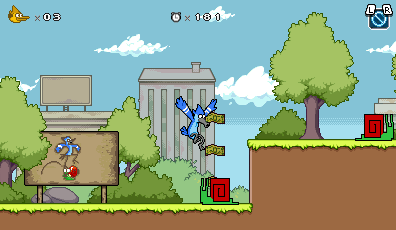 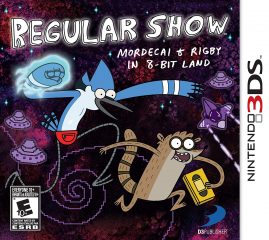 There are a lot of things that made Regular Show stand out from Cartoon Network’s critically acclaimed programming in the early 2010s, but one quality in particular was its fondness for retro gaming. While most shows would be content name-dropping a famous title or showing characters “playing games” for a brief joke, Regular Show went all in on capturing many aspects of playing games from the 80s and 90s, wearing the production crew’s love for the pastime on its sleeve.

With that in mind, it’s surprising that the series only ever got one video game for more traditional systems. Regular Show: Mordecai & Rigby in 8-bit Land is a retro-styled 2D platformer developed by WayForward Technologies, a team known for putting out solid licensed games that harken back to the same era with a similar degree of affection (Alien Infestation, The Mummy Demastered, the first three Adventure Time games). This combination should ideally make for a fun throwback, but for whatever reason, the end result buries its potential under a mediocre, sometimes sloppy game. 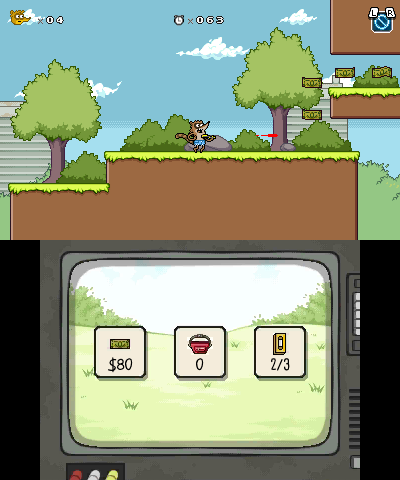 Mordecai and Rigby are tasked with mowing the lawn as part of their job at the local park, but they slack off to play a new video game console that mysteriously appears on their doorstep. When they turn it on, they’re sucked inside and have to escape! It’s a very simple plot that echoes the similarly threadbare narratives of most old games, but what’s disappointing is how little is done with it. There’s only a pair of cutscenes at the beginning and end of the game, which consist of pictures with no animation or voice acting, and despite being written by series creator J.G. Quintel, they only establish the conceit of the plot and the surface level dynamic between Mordecai, Rigby and their boss Benson.

On that note, the game does a pretty poor job at representing the series. Benson is the only other character from the core cast who appears, with everyone else inexplicably missing. Enemies, bosses and locales largely come from the first few episodes barring one or two exceptions (such as the final world’s setting and boss, which are based on the premiere episode for the fourth season “Exit 9B”). Apart from a couple of minor touches like Mordecai and Rigby shouting “OHHHHHHHHHH!” when they beat a level, barely any of the show’s off-beat charm carries through.

8-bit Land is a 2D platformer where the goal is to reach the end of the stage. You play as either Mordecai or Rigby, who can run around and jump over gaps or onto the heads of enemies. Mordecai can double jump, but he can’t fit in the tight spaces that Rigby can crawl through. With the press of a button, you can swap between the two of them whenever you like. It’s quite basic, but the game does something interesting by introducing a new gameplay type in each world. In the second world, you can transform into a spaceship by pressing one of the shoulder buttons against a starry background. This turns the game into a side-scrolling space shooter where you can fly in any direction and shoot left or right. In the third world, pressing the shoulder button against a greyish brown background turns the game into a top-down shooter along the lines of Smash TV. 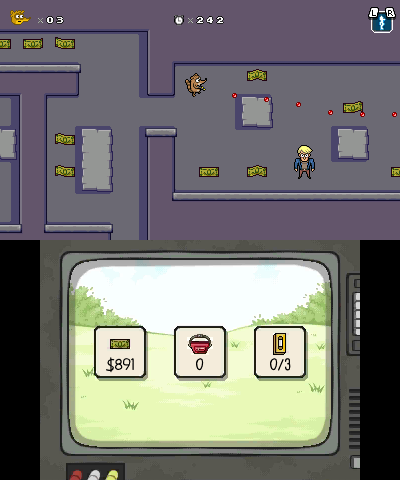 You can find cash scattered about the levels or by defeating enemies, and you can get more by beating levels within a time limit. Getting 100 will give you an extra life, and you can also use them buy tokens in a mini-game after each level where the tokens will swap paths that can lead to more cash, lives, or fanny packs (which act as continues). You can also use Play Coins from your 3DS to buy tokens, which is pretty cool for a third-party game.

Hidden in each level are three golden video tapes, similar to the Star Coins from New Super Mario Bros., but they only unlock bonuses like concept art and a sound test. However, the platforming challenges and puzzles you’ll have to solve to get them are satisfying, as you’ll often need to swap between character/gameplay types or time things just right. These challenges are also the best level design ever gets. Most stages tend to have flat stretches and blocky corridors, with no real attempt made to differentiate between levels through unique gimmicks or degrees of complexity. The only time things get interesting is in the final level, where your ability to swap between gameplay styles while doing some precise platforming is put to the test.

Occasionally, you’ll find a mullet that gives you the ability to fire off a ranged or more powerful attack, along with an extra hit point – this is very important since you normally die in one hit. This can be a controversial choice, but usually isn’t so bad if the power-ups are common (Mario’s mushrooms, Crash Bandicoot’s masks) and the controls & collision detection are tight enough that you can get through a level without getting hit through player skill alone.

Unfortunately, 8-bit Land doesn’t do either well enough. You’ll be lucky to find more than one mullet in most levels, which can make the spaceship levels especially arduous when you have to dodge so many projectiles. Thankfully, they do become more common in the final world, perhaps to make the increased challenge less daunting, and they usually appear after you reach a checkpoint. 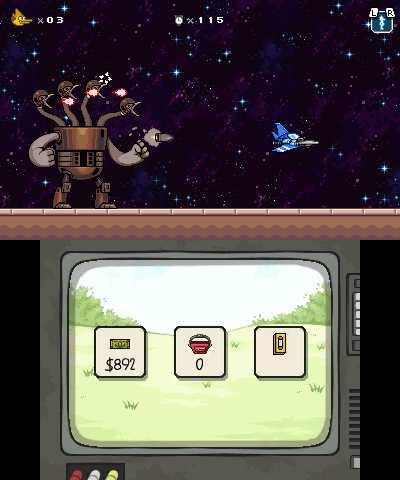 However, the bigger problem lies with the controls. Moving around feels a bit too slippery, and how the run button plays into this is especially weird. If you suddenly hold or let go of the run button while in the air, you can either gain or lose an extra bit of momentum in a manner that feels too unintuitive to utilize in platforming sequences. It’s usually so risky that you’re better off playing as Mordecai at every given opportunity so you can use the double jump to correct yourself.

You defeat enemies by jumping on their heads, but thanks to some sloppy hit detection, you’ll often end up missing the exact point and get hit/killed. It’s far safer to jump over enemies and avoid combat whenever possible, except when it comes to the boss battles. Here, you have to dodge their repetitive attack patterns and try to hit them in just the right spot, which usually doesn’t happen so you die and have to do the whole thing over.

Apart from the lack of polish, the gameplay is otherwise okay but unremarkable. The top-down segments are perhaps the highlight of the game thanks to being enjoyably brainless, but is let down by how easy it is to exploit the enemies’ AI to lead them down halls and behind cover you can shoot through. In addition, there’s only 16 levels and four boss battles spread over four worlds, which can be beaten in just under a couple of hours. While you can unlock a New Game Plus mode with tougher enemies and a forced time limit, 8-bit Land isn’t good enough to warrant a second, harder playthrough.

The graphics manage to recapture the show’s look in pixel art quite well and it runs at a fast, consistent framerate, but the art direction is uninspired. The levels are bland and have drab color palettes, which fails to take advantage of the variety of surreal worlds seen in the show, and the enemy selection is so small that you’ll tire of seeing snails, geese and Death Punch Punks by the end. The final world’s greyish brown colors are also too similar to the color of the walls where you swap to the top-down mode, which can kill you if you don’t notice the slight difference in time.

Thankfully, the presentation is saved by the stellar soundtrack by Jake “virt” Kaufman (Shantae, Shovel Knight, Mighty Switch Force). The music is rendered in chiptune to fit the retro stylings, and is full of excellent instrumentation, catchy melodies that sound like they came right out of a Sunsoft NES game, and a variety of moods and arrangements that make each setting memorably distinct. A very nice touch is how the track arrangement changes when you swap gameplay types. 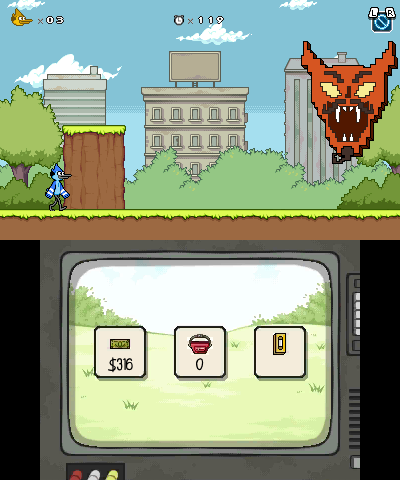 Mordecai and Rigby in 8-bit Land was released both digitally and physically, but was delisted from the eShop at some point between 2017 and 2019, most likely due to the license expiring. While physical copies are plentiful and pretty cheap (ranging around $10-20), it’s difficult to recommend to retro platformer fans when even the 3DS Virtual Console features much better games with more content, and there’s not enough here to please all but the most curious fans of Regular Show.