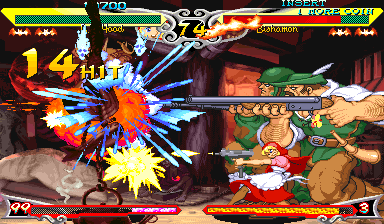 Probably taking a cue from the recent popularity of SNK’s plot-driven The King of Fighters series, Capcom tried giving Darkstalkers 3 a deeper backstory than previous installments. It’s set a number of years after Night Warriors, during a time of upheaval and chaos in Makai. Belial Aensland has finally kicked the bucket and the resulting power vacuum is shaking the demon world to its core. If things weren’t bad enough already, Jedah Doma has mysteriously reappeared. Slain a century ago after the betrayal of his servant Ozomu, Jedah has somehow pieced his vaporized self back together. Seeing Makai in a state of stagnation and decay, Jedah decides what it needs is a fresh start. He creates Majigen: a separate world within Makai, and a womb for its new god. His plan is to draw all souls into Majigen, fuse them together into one being, and then reboot existence. (And the human world will be next, naturally.)

Presentation-wise, Darkstalkers 3 is top notch. The sprites haven’t changed, but they still look just as good as they did three years ago, so no problem there. With one or two exceptions, all the stages have been overhauled, and they look amazing. Serious love and attention was put into designing the Majigen locales, especially Vanity Paradise, Tower of Arrogance, and Iron Horse, Iron Terror. Some of Darkstalkers 3‘s spooky/techno-pop tunes are the best the series has to offer, but a few less-inspired tracks keep the score from being quite as solid as Night Warriors‘. The only real problem with the backdrops and music tunes is that there aren’t enough of them, since they are no longer character-exclusive. 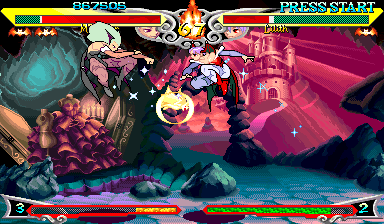 Darkstalkers 3 boasts a roster of fifteen characters. That’s only one more than Night Warriors, but four new characters join the cast while Pyron, Phobos, and Donovan get the boot. Fortunately, the new guys are cool enough that the three exiles won’t be terribly missed. Lilith, Q-Bee, Bulleta and Jedah are possibly the best set of newcomers to grace a fighting game sequel.

Darkstalkers 3 is the most fast-paced fighting game ever. Its blazing combos and rushdowns are akin to something out of a King of Fighters Halloween coke party. It even leaves Guilty Gear and the Marvel Vs. series in the dust in terms of speed. It’s not at all uncommon for matches to be over within fifteen seconds. In addition to the sheer speed of the action, Darkstalkers 3 takes a different approach to how matches are set up. Each player has two life bars. Similar to Rare’s Killer Instinct, when a player loses a life bar, there is a one- or two-second pause before that character gets back up and resumes fighting. In result, players’ health isn’t restored between rounds because there aren’t any rounds. When a player takes damage, a portion of the depleted life bar flashes white, and slowly regenerates as long as the same player doesn’t get hit again during the process.

In addition to ES and EX moves, Hunter Chains, pursuit attacks, and everything else introduced in Night Warriors, Darkstalkers 3 also includes Dark Force attacks. Each character has one or two Dark Forces, which are executed by tapping a pair of same-strength punch and kick buttons. For the cost of one stock, your character becomes powered up for a limited time. Bulleta’s Dark Force allows her to fire missiles just by tapping punch buttons. Zabel’s Dark Force has him swinging Le Malta around like a chainsaw. Lei-Lei gains super armor, meaning that getting hit won’t interrupt her attacks. Dark Forces are accompanied by an ethereal background shift which doesn’t have much of a bearing on gameplay, but sure looks cool.

Darkstalkers 3 never really took off in the States, but it was supposedly fairly popular in Japan. Two ports of the game appeared on the PlayStation and Saturn consoles. The Saturn version was virtually identical to its arcade counterpart, and uses the 4MB RAM cart to completely eliminate load times. Unfortunately, since this was only released in Japan, most of us probably had to settle for Darkstalkers 3 on the PlayStation. While inferior to the Saturn version, it is surprisingly decent, a relief after the abysmal PlayStation port of X-Men Vs. Street Fighter. Though there are a ton of missing animations and load times, it’s still a close approximation to the original. Both versions include the three characters cut from the arcade game (Donovan, Phobos and Pyron). The PlayStation version also has a slew of extra options to make up for the inferior port quality, such as an art gallery, a character edit mode, the ability to turn on full Savior 2 or Hunter 2 modes, and options to change combo cancels and double jump options. Unfortunately, the minor bits of blood have been completely removed from the American version.

Other ports and updates 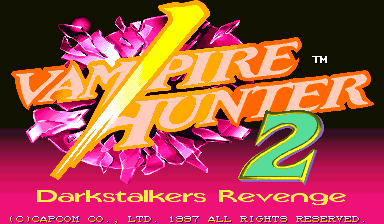 Vampire Hunter 2 and Vampire Savior 2 are two separate tweaks to Vampire Savior. Hunter 2 takes out the four new characters to put Donovan, Phobos and Pyron back in, and all the music is replaced with the tunes from Night Warriors. Savior 2 is Savior with Donovan, Phobos and Pyron back in and Gallon, Aulbath and Sasquatch taken out. The PlayStation and Saturn ports of Vampire Savior have all of these characters anyway, so it’s puzzling why Capcom just didn’t do that with Savior 2 to begin with. There’s a few new pieces of artwork in the endings, but that’s about the only thing added to these. 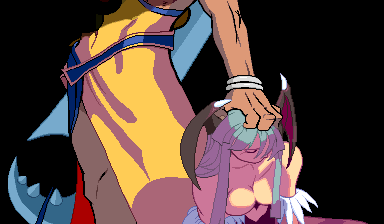