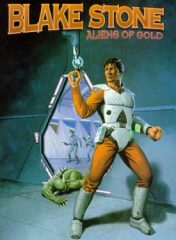 Even a year after its original release, Wolfenstein 3D was a pretty popular game. Apogee began work on a sequel, which would become a different game entirely (Rise of the Triad), but had a little company known as JAM Productions make a game with the Wolf engine in the meantime. 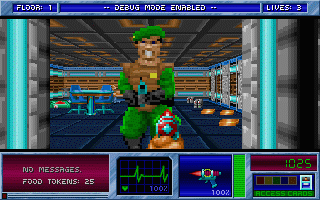 While Wolfenstein was based off the World War II period, Blake Stone is actually more like a James Bond story set in the future. You play as Blake Stone, secret agent for the British Secret Service and a much angrier guy than James ever was, going by how he treats his computer assistant. The evil Dr. Goldfire is using gold to create an army of mutants to take over the world, and each episode centers on stopping one of his facilities. There are six episodes in total, each with nine floors, plus one hidden level. The goal of each level is to find the red keycard and then return to the teleporter from which you entered the level. There’s going to be plenty of enemies and locked doors in your way on each level, so weapons and keycards are going to be necessary. You start the game with a silenced laser pistol, which is a bit more useful than the piddly little knife they gave you in Wolfenstein, even if it has to recharge for a second between shots.

For the most part, the other weapons you find aren’t really much more than reskins of the Wolfenstein 3D guns. You have a pistol, a rapid-fire gun, and a gun that fires even faster. The final and most impressive weapon in the game is the Plasma Discharge Unit, which is a handheld cannon that shoots out a constant stream of energy balls. There are a few things that make the game a little more than just Wolfenstein in Space, although there aren’t as many as there could be.

There are barriers, which come in either solid or electrical variants, which can be turned on or off with switches you find on the walls. If you’re fast enough, you can actually turn on a electric barrier while an enemy is crossing it and kill them. There’s also an automap activated by hitting the tab button, which the original Wolfenstein 3D needed most of all. It’ll also show you stats like the percentage of enemies killed and point items collected per floor. The map removes the aimless wandering for keys you’ll have to do, and it’s the biggest improvement the game made to the Wolf engine.

There are also several scientists who wander around each floor. Some of them are loyal to Goldfire and will shoot at you if you shoot near them or bother them too much, usually giving you a warning beforehand. Others are friendly, and will offer you advice (which generally isn’t very helpful), ammo, and tokens. You can use the tokens on vending machines scattered across the level, which will refill some of your health for each token you spend. It IS possible to shoot the friendly scientists, and the game will get angry at you for it, although the only real punishment is a lower total “Mission Rating”.

Blake Stone can get pretty tough, even on the default difficulty. Most enemies can take you out with about three or four shots at full health. Ammo and health are also placed more sparingly the further into the game you get. You can’t even rely on the food machines, because they’ll break if you use them too much, forcing you to look for another one. Getting a good habit of quicksaving as you go along can be vital for finishing the game, especially since, just like Wolfenstein, you’re working with three lives.

There are a few graphical improvements in the engine, mostly the addition of textured floors and ceilings. There’s a pretty decent variety of enemies, both of the human and non-human variety, and they’re all fairly well drawn. Their death animations are surprisingly gory, too, even compared to Wolfenstein. The basic grunts’ blood practically explodes out of them, while others get their limbs blown off or just fall apart into a gooey mess. The music is decent, if nothing special, but the screams the enemies make when you kill them go from poorly acted to hilarious. Friendly scientists make an overdramatic “NOT ME!” as they die, and most of the alien enemies sound more like they’re seriously constipated.

Blake Stone isn’t a bad game overall, as early FPSes go, and the map does make it a bit more enjoyable than Wolfenstein. While it isn’t entirely fair to call it just an overglorified graphical mod, there’s not much that makes it more than that when compared to Wolfenstein 3D. Blake Stone: Aliens of Gold was released only a week before Doom, and once that game came out, it was more or less forgotten until the sequel hit, which was even more dated. 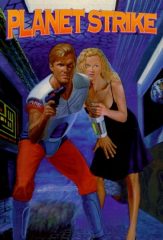 You really have to wonder if a sequel to Blake Stone was really necessary. The original game, while not having any outstanding flaws, didn’t do much to separate itself from Wolfenstein 3D. And to have a sequel that used the exact same technology with no real improvements, and release it two weeks after Doom II… the decision is simply mind boggling.

At the end of Aliens of Gold, Dr. Goldfire escaped, somehow surviving numerous shots from a weapon that kills most mooks with just a few. He’s hiding out in an abandoned facility, and it’s up to Blake Stone to head in and finish the job.

Planet Strike is less of a sequel and more of a standalone mission pack. There are some new graphics and a few very minor gameplay changes, but everything else is more or less unchanged. The goal of each of the 20 floors is to find a bomb, and then use it to blow up the security cube preventing access to the next floor. While this does make the levels take slightly longer to finish, it doesn’t do much to freshen up the gameplay at all.

The most notable change from the original Blake Stone is the automap, which has now been moved onto your HUD. There are also magnification energy pickups to collect, which let you zoom the automap in. Zooming in once will show you any nearby enemies, and zooming in twice will show you nearby secret walls. This is a pretty useful feature, even if it does take a good bit of challenge out of the game. There is one new weapon, but it’s only a faster firing upgrade to the Plasma Unit that sucks away ammo so fast it’s almost pointless to use.

The graphics have also changed around a little. The weapons were changed to look more photorealistic, which only makes them look even more pixelated than they were before. The game also advertises new alien guards, but if you look and listen to them carefully, it’s obvious they’re just the old human enemies recolored, with their voice clips played backwards. Some of them do appear to be cloaked, though, and some camouflage themselves into background objects like pillars before they attack. The game also completely reuses the bosses from Aliens of Gold as weaker regular enemies with no changes to them at all, as if that wasn’t lazy enough.

Blake Stone: Planet Strike is nothing more than a cheap mission pack to an average FPS that was quickly and easily outdone by much better games. There’s no real reason to play it over Aliens of Gold, as it’s little more than an extra episode that doesn’t stand very well by itself. JAM Productions soon shut down after the release of this game, and compared to what was already on the market, it’s easy to see why.