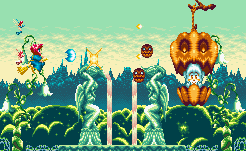 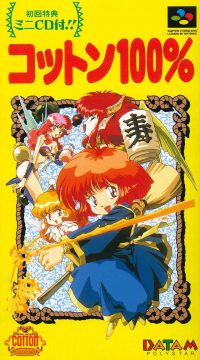 The original Cotton was surprisingly dark for a game starring an adorable little pink-haired witch. Cotton’s SFC outing, Marchen Adventure Cotton 100%, changes all of that. The game puts the color palette of the Super Famicom to use, featuring bright green forests, snow covered mountains and gorgeous castles. One of the levels is even a cutesy reimagining of the second stage in Cotton – instead of fighting zombies in a graveyard, you fight pumpkin men who lob their heads at you. Instead of being a gigantic skeleton, the boss is a huge, demonic doll. There are seven levels total, each with two boss fights, which are the highlights of the game. One stage has you fighting a gigantic snowman, who plays a game of baseball with snowballs. Another is a tree in the middle of a river; both its roots and the fish below will attack, but after sustaining enough damage, it’ll extend one of its branches, and a squirrel will pop out to cause some more trouble. 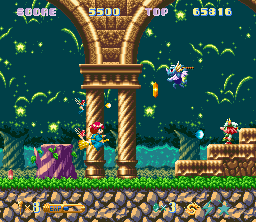 It’s also a much easier game than its predecessor. On the lowest difficult level, the experience gauge will drain when you die, but your weapon strength will never actually power down. You can set up to nine lives in the menu, and you continue right where you left off when you run out. Even the harder modes aren’t that difficult.

The weapon system has been drastically simplified since the original arcade game. When you begin, you’re greeted with an equipment screen like the Gradius games. Here, you pick one out of four configurations, each containing three magic spells, which you can switch between during gameplay. These include the familiar fire dragon and lightning attacks, along with a bubble attack, a barrier, and an attack that rains stars on the screen. Enemies still drop crystals, but there are only two colors, and they both increase your experience gauge. Instead, magic is regained by picking up certain power-ups. The formation of your fairy helpers is determined by your magic selection. Overall, the game is a little too easy, but it’s a fun and enjoyable cute-em-up. 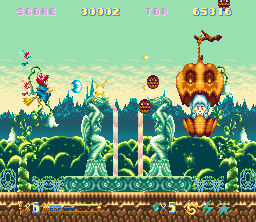 The default high score for the original Cotton was 68000, owning to the main CPU of the System 16 board. In this game, the default is 65816, the CPU of the SFC. The initials of the high score also spell out to read “small silk pantsu” (“pantsu” being the Japanese word for panties). The game came with a miniature CD featuring vocal songs by the voice actress that plays Silk.

Cotton 100% was also brought to the PlayStation in 2003 under the Super Lite 1500 label. It’s a straight port, with music similar in style to the PS1 port of the first game… that is, sounding like it was run through a low quality synthesizer. There are a few minor bugs, though.