Toshiaki Sakoda was a composer who worked for Compile during the late 80s and early 90s. Beyond providing music to classics such as Aleste 2 (MSX), assorted Madou Monogatari titles, Xevious: Fardraut Saga, Gun*Nac, MUSHA, GG Aleste and Spriggan for Compile, he also worked on titles for Naxat, such as Alien Crush and Devil Crush for Naxat, as well as titles like Cyber Knight. After working with Compile, he joined Sting, where he provided music for Treasure Hunter G, Baroque, Evolution and others. His most famous tracks are heavy metal pieces, which sound incredible given the PSG/FM limitations of the systems. Tracks from MUSHA and Devil’s Crush ranked highly on the HG101’s Best VGM of All Time poll. He often posts his works, old and new, on his YouTube channel. Additionally, the Naxat Shooting Collection CD includes music with his soundtracks, including MUSHA and Spriggan.

How did you first get involved with composing music?

When I was 8 years old, I played the classical guitar. From that time, I wanted to compose. So, my guitar style is also classical.

How did you become involved with Compile?

There was a recruitment ad. So, I applied for it.

Were you previously a computer or video gamer?

I wasn’t really playing many games at the time.

Can you provide us with a full discography of all of the games you’ve worked on?

Unfortunately I cannot. The reason why is, a huge number of projects were ghostwritten.

Were you a full time employee of Compile, or did you work as a freelancer too? Your other games included games published by Naxat and Hudson, how did you become involved with them? 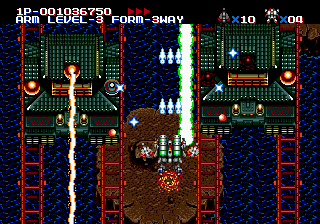 What was the computer game development scene like in the 1980s? Did you know any of the other composers, or did you ever receive any feedback from fans?

I worked on MSX, PC Engine, Famicom, Mega Drive and others. I am not interested in other composers. Sometimes my fans have asked me “I want you to compose a song like this”, but they tend not to be suitable for the game being produced.

What kind of equipment did you use to compose your music?

At that time, I mainly composed using the MSX. I also produced the sound drivers. At the beginning of the 90s, we used MIDI.

What is your personal favorite soundtrack you worked on? 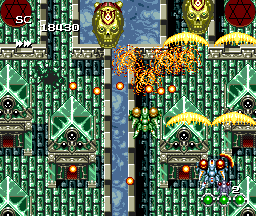 Do you have any other composers whose work you admire?

MUSHA and Devil’s Crush are your most well known works, so I can assume you’re a fan of heavy metal. Which bands were you favorites? And what other types of music are you a fan of?

Have you ever met Toshiharu Yamanishi, the composer of Thunder Force IV? The music styles in both that game and MUSHA are quite similar. You guys should get together for a guitar dual!

I have not met with Toshiharu Yamanishi. It seems like his style is similar to my own, though.

How closely did you work with your peers? Did you eat with them or go out drinking after work?

I am the sound director of each project. We usually eat together and drink with each other outside of work. Communication is very important in game development.

Are you familiar with situation regarding the closing of Compile? Were you around for the final days of the company?

No. I resigned from Compile when I thought they would go bankrupt. At that point, I became a director and a producer at Sting.

Do you still compose music nowadays?

Yes. I upload music on Youtube all the time.

Retro video game music seems to have been seeing a resurgence on the Japanese marketplace lately. For example, the Naxat Shooting Collection includes music from MUSHA. How do you feel about exposing your music to a new generation of fans?

Recent games require a lot of money. There are a lot of games that are not interesting. I think generations are cyclical. Music of the ’70s are in vogue in the United States currently. The world repeats.

I would like to work together with people in the world. I want to put the music that a fan composed on my CD. Also, if you invite me anywhere, I will go! Let’s attend events together!

MUSHA  Aleste was composed to be a heavy metal suite. In order to overturn the industry, I made this song. It is a heavy metal suite for the first time in the world. Rather than to play just a game, you can enjoy the music only for you. Sound source is FM sound (frequency modulation oscillator). Thank you!