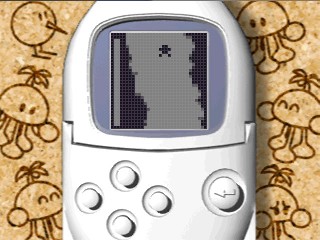 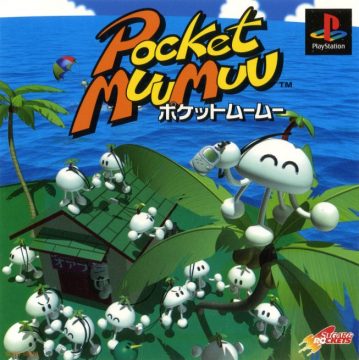 After a three-year absence, Robbit and friends made their way back to the PlayStation. However, this time the focus is on collection mini-games rather than platforming. The interface in Pocket MuuMuu is similar to that of the previous two Jumping Flash! games. While on the worlds, the game switches to the traditional Jumping Flash! first-person perspective. However, the HUD is slightly different this time. The power bar and weapons cache are gone, replaced by a digital clock and display of your Mu (the in-game currency). 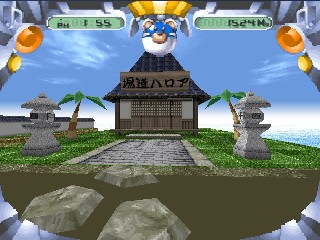 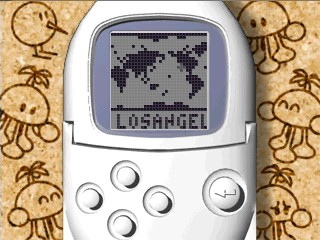 The applications you can acquire in Pocket MuuMuu come in two flavors: PG and PT. PGs are games, while PT are tools (usually trinkets like kitchen timers or address books) that have simple functions. There around 70 PGs and 30 PTs throughout the game, though you start out the game with one PG. How do you get more of these Apps? By earning Mu. How do you earn Mu? By playing PGs. This is fairly straightforward.

The PGs are similar to the early WarioWare mini-games, though they predate that series by four years. There’s a variety of games, even if their content isn’t revolutionary: Simon Says, 100-meter dash, figuring out look-alike shapes, a FPS, even an RPG. And a few of the game even have character select screens. There’s some charm to competing in the 100 yard dash as a ninja who backflips towards the finish line. In the push war game, when the dinosaur loses, he suddenly becomes “extinct” and turns into a skeleton that falls down the mountain. 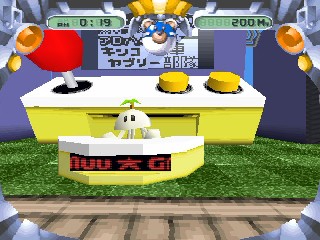 Like the minigames from the WarioWare games, they’re great in small bursts but their charm fades with repeated use. And, oh, will you play them. The new applications usually cost 4-6,000 Mu; the average output of playing through one of the mini-games is 300-500 Mu. To get any new content, you’re required to grind like it’s an RPG from the 80s. You’ll find yourself playing the push war minigame just because you can get 1,000 Mu for each playthrough.

The Muu collecting seems to be an artificial way of extending the gameplay. The same for the amusement park world, which also requires epic amounts of Muu to access new content. These elements seem like sloppy justification for a game that essentially a collection of what should be default applications for the PocketStation. Pocket Muu Muu has no cut scenes or voice work, only two game worlds that can be explored, and barely any graphic elements that haven’t been lifted from the previous Jumping Flash! games.