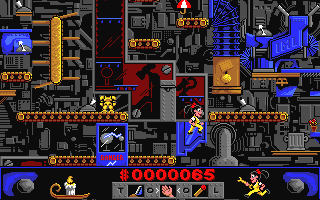 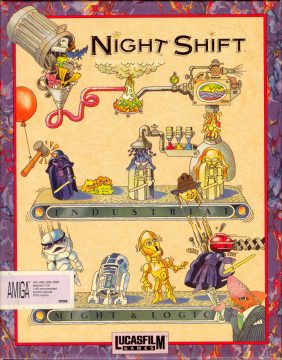 LucasArts, or Lucasfilm Games if you prefer, before getting shut down by Mickey Mouse in 2013 was a very well-regarded and famous company, thanks to both its several high-quality adventure games as well as its endless slew of titles based on the Star Wars franchise. Night Shift, however, has nothing to do with either, being one of their most obscure and forgotten games, a cartoony “factory worker simulator”. To be fair though, the game was just published by LucasArts, but made by a software development company named Attention To Detail Ltd., actually their the first foray in the world of games.

It is a bit difficult to put Night Shift in a precise genre: it can be seen as a puzzle game disguised as a platformer, where a blue-collar worker (either Fred or Fiona Fixit, from the game’s working title “Mr. Fixit”) has to operate and maintain all by themselves a gigantic contraption that churns out… cheap plastic toys based on Lucasfilm’s properties! The whole game in fact can be seen as a self-parody of George Lucas’ legacy: the company the characters work for is called “Industrial Might & Logic”, and the game’s title screen spoofs Industrial Light & Magic’s old logo. 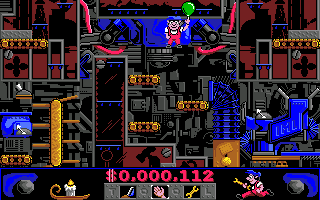 The resin used to make the toys comes from industrial waste, the employer Frank Foreman is a greedy bastard with zero regard for his lone worker’s well-being, the machinery is made of junk and needs to be constantly repaired, and not meeting the quotas for the day will cause us to be immediately fired. The satirical intent of the game and its British humor are clear, however they translate to a quite hard and unforgiving gameplay, since the tasks pile up very soon, the assembly line’s malfunctions make everything needlessly harder and it feels like there’s never enough time to do everything. You’ll start to dread the siren that signals that something broke.

BEAST (the name of the machinery, standing for Bingham’s Environmentally Active Solution for Toys) is huge, being six vertical screens in height. But we don’t have to control all of it, at least at first. At the beginning of our first day, the player’s tasks will be to hop on the bike linked to the generator that powers BEAST and pedal for a bit, then turn on the furnace that melts the waste into the resin, and when it reaches the right temperature, turn on the conveyor belts so that the pieces making up the toys fall into the right places. The lower part of the screen shows a candle that indicates the time remaining until the end of the shift, your wage and a toolbox with useful items: a wrench, a match to light fires, a balloon and umbrella that, in the game’s cartoonish logic, are used to reach respectively the top and bottom of the machine if using the stairs takes too much time, and so on. Your wage (i.e. the game’s score) equals to a dollar for every second of play plus a certain amount of cash for every toy you make and every toolbox item, dollar sign or hourglass (to add a little bit of time to the shift) you can randomly find and pick up. Misshapen toys (e.g. legs over the head) will be detracted from the salary instead. 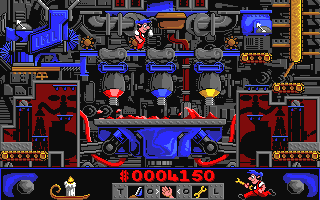 Sounds simple, but with every shift new tasks will be added to the ones mentioned above, in order to cover the whole production process. For example, some action figures will need to be painted in certain colors, and after a while we’ll even need to mix the paint ourselves before activating the dryers. The path of the conveyor belts becomes more and more twisted, and, since there won’t be just a single type of toy to make, don’t put the figures’ heads on the wrong bodies! Near the end of the month we’ll even have to make the toys fall into the correct boxes for shipping, and operate the Quality Control, represented by a Looney Tunes-style spring-loaded giant boxing glove that punches away the failed action figures. Needless to say, after the first few shifts the things to do become just overwhelming.

And of course BEAST constantly needs to be repaired, so even when the player follows the correct sequence of actions something will still threaten to make all your hard work go up in smoke. Thankfully there are passwords to restart from the last shift you reached (they are not combinations of numbers or letters, but rather fruit symbols right out of slot machines), but the problem is that the malfunctions are randomized every time you load a new shift, so you can’t just do the same thing every time and call it a day (or a night, in this case).

As if all that wasn’t enough, there are also two kinds of enemies, appearing in later levels. Lemmings run towards the player and slow them down; you can kick them away, but to get rid of them, in another example of the game’s zany logic, you need to use either a vacuum cleaner or a carnivorous plant (!) somehow found in your toolbox. Then there is Larry Lawyer, whose only purpose is to knock you down for a while: you can do the same to him, by either kicking him or whacking him with the wrench if you have equipped it. Something that is funny on paper but only makes Night Shift even more frustrating. And the same can be said about the manual that does its best to pretend it’s an actual instruction manual for a piece of machinery, going into detail about how BEAST was made and works, but offering few hints on how actually be good at playing the game.

Just like its setting, Night Shift’s art and music are workmanlike. Outside of the “industrial” title tune, there is no BGM at all, only a few sound effects, the warning sirens and BEAST’s constant rumbling that becomes grating after a while. The pixel art is quite nice and animations are smooth, but every level is set inside BEAST so they all look the same, the only difference being the panels covering the unused parts of the machine,  and the sole variations are Frank Foreman’s office at the beginning and end of every shift plus the intermission scenes with Fred or Fiona going back home every few nights. The controls are okay and the general concept is interesting, but for a game like this maybe it would’ve been better to implement a cursor like in Lemmings or The Incredible Machine to interact with the items and scenery, instead of relying on a platform game avatar that makes everything cumbersome.

The title was converted for most home computer and microcomputer systems available at the time, and they all handle reasonably well considering the limitations. Ironically, the simpler graphics of systems like Spectrum or C64 actually make it somewhat more manageable: lots of unnecessary details like valves and cogs in the background have been removed, making it easier to tell what are the elements of the scenery where you can jump or stand on. Which is a problem when Fred or Fiona constantly fall down and get concussed, losing precious time. Also,  these versions don’t have the machine’s incessant droning either. 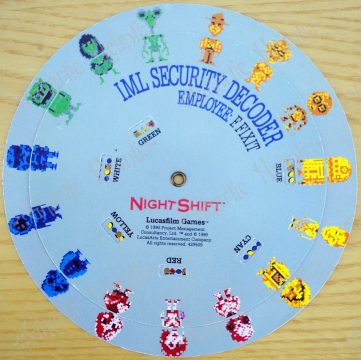 Night Shift came out during the golden age of “feelies” and copy protection, so the box in some versions included a manual apparently written by Mr. Bingham himself and a small newsletter about IML and its founder, but every one of them had a code wheel that uses the same graphics of the game, where you have to align the various action figures’ heads and bodies to reveal the codes required to boot the game. It is amusing, also because you can come up with your own mutant freaks, such as Zak McKracken with Darth Vader’s helmet or Indiana Jones in ET’s body. And, is that hooded creature a Jawa or Bobbin Threadbare?

Even if Night Shift references a good chunk of Lucasfilm’s history up to that point, the same didn’t become true for the game itself: Fred and Fiona Fixit never appeared again either in another game or as a cameo in subsequent LucasArts productions, and in general the title has been regarded as a flop and an oddity in the company’s lineup. As for Attention For Detail Limited themselves, their mark in the world of gaming was kind of…limited: they developed a few second-tier games like the infamous Cybermorph (“Where did you learn to fly?”) for Jaguar and several racing titles of varying quality, and were involved in the creation of the failed Konix Multi-System console, before folding in 2003. 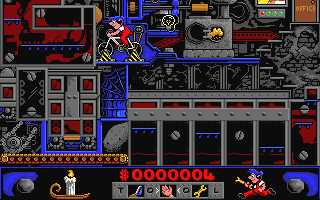 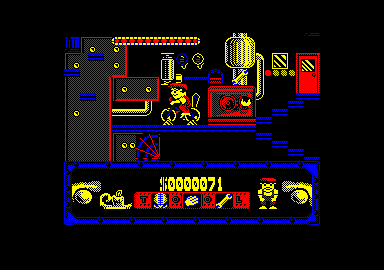 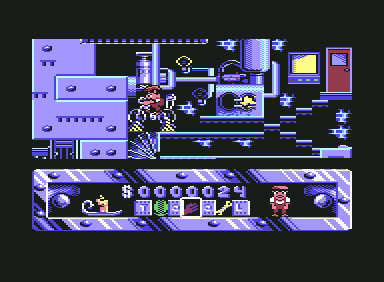 Mobygames – Most of the images taken from the site.