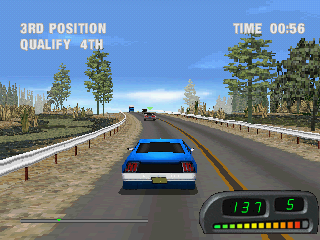 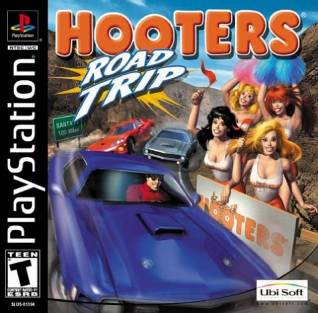 A great many things could be said about the Hooters franchise, hardly any of them good. For those readers who may not be familiar with them, Hooters is a chain of restaurants across the United States, in which all the servers are women in short shorts and tight white shirts. Their food, as you may imagine, is generally considered to not be all that great. Yet, for reasons you might surmise from what was previously mentioned, they’re still incredibly popular. So popular, in fact, that Hooters got its own video game. Even if this game weren’t in this particular section of the site, the idea that it’s not very good probably won’t surprise you all that much.

The game was published by Ubisoft, at the point just a little before they became the mega-conglomerete they are nowadays. Given that the game was published in 2002, retailing at a price of ten dollars, it should show that they clearly didn’t have much faith in the game. To be perfectly honest, they were right, as there’ve been racing games from the launch of the original PlayStation that offered more fun and content as this. Even Cruisi’n USA, as dated as it might be in places, looks like Gran Turismo in comparison.

You take the role of an unnamed driver, on the somewhat less than noble quest of driving across the US and visiting every Hooters restaurant you find. The game itself is an arcade-style racer, in which you have to race against five other cars to reach the finish line first, racing through cities, highways, and country roads, all while dealing with traffic. On paper, it only sounds like a fairly generic racing game, a genre that’s already been done so many times before on the PlayStation, with far better efforts, as well. Playing the game reveals a total debacle of a racing game that fails in every way. 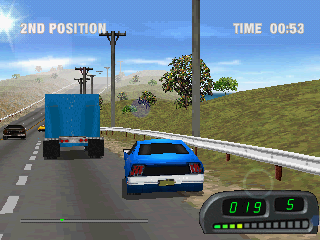 The controls alone are some of the most difficult to deal with in any racing game for the system. Cars with low handling stats either take a full second to begin turning, or veer off to the side of the road with the slightest tap of the D-Pad. Often, you will skid right into a railing and try to right yourself in the other direction, only to quickly veer into the other railing, bouncing back and forth in a futile attempt to get your vehicle back under control. In fairness, there are cars you can unlock that control slightly better, but the fact that you have to unlock such cars to play even somewhat comfortably doesn’y help at all.

Not that there’s much reason to try and navigate the tracks all that well. Every single one is a long, featureless stretch of road, sometimes a highway, but usually a single, two-lane stretch of country road where you have no room to maneuver. Very rarely, you’ll drive through a city, or in this case, a few blocks on the side of the road that look like buildings. That’s about all the variety you’ll get, aside from what the trees on the road look like. In some exciting cases, there won’t even be trees at all. It’s realistic, sure, but the fact that there are no jumps, obstacles, shortcuts, alternate routes, or even so much as a billboard to look at while you drive means that the game is about as exciting as a particularly long family vacation. You do get a little more variety near the end of the game, like a Southwestern desert, but it still doesn’t do anything particularly interesting.

It’s an incredibly dull experience, especially considering how little challenge there is to the actual game. You have to make a sincere attempt to actually lose, given that most of the AI cars will have more problems trying to navigate the oncoming traffic than they will beating you. There is one particular car on the track that will sense even the slightest moment of weakness in you and use it to rocket ahead. If that happens, though, it doesn’t even matter, because the conditions for winning are so lenient that even in the endgame, you only have to take 3rd place or higher to win races. The traffic is a far more formidable opponent, given how often you’ll be crashing into it because there is no room to move around it. 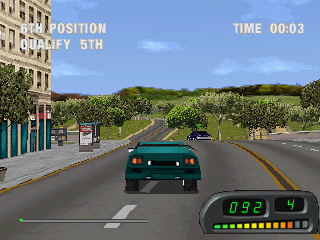 The game is split into seven roadtrips, each of which are comprised of several races. Since the first Hooters was apparently started in Jacksonville, Flordia, you start every stage there, and it never, ever gets any less dull. In fact, you’ll be visitng the same tracks again and again in every roadtrip, always using the exact same layout. Even the new tracks look just about identical to the others, aside from the local foliage or the weather. Finishing each roadtrip gives you a new car to drive, but before you can use it, you have to do a time trial to actually earn the right to use it. Much like everything else in the game, these time trials are pretty dull, even more so since there is no opposition besides a few traffic cones. It’s just pointless busywork for something that makes the game only slightly less terrible.

Of course, if you’re buying a game like this, it’s more than likely you’re buying it because it had ladies on the cover. Either that, or because it originally retailed for ten dollars. But it was probably the ladies. The game makes use of a lot of FMV of various women, who don’t do much besides welcome you to whichever part of the country you’re in, including your many, many trips to Jacksonville. Most of their deliveries, as you’d imagine, are rather awkward. On the other hand, there’s a lot of jokes to be made about a bunch of women announcing that you finished first, as what happens when you clear a roadtrip in 1st place. Even those who might have bought the game hoping for nudity will be disappointed by the game’s T rating, meaning the ladies wear about the same amount clothing as what would be seen in an actual Hooters. 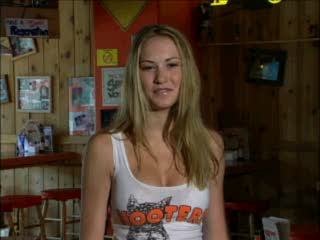 Overall, this game is guaranteed to disappoint everybody, in some way or another. In all fairness, it isn’t another Big Rigs. It functions as a racing game, but only in the barest, most basic form of the genre, one seemingly engineered to be as boring as humanly possible in every way. Amusingly, previous Your Weekly Kusoge star Miracle Design helped with the programming. This was not a big improvement in their career.

There’s also a PC port, although no footage currently exists that shows how much better it could possibly be than the PlayStation version.