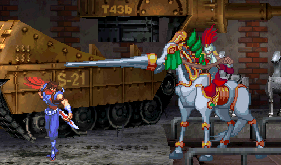 After the awful Strider Returns pretty much obliterated the integrity of the franchise, Strider seemed long gone. Loyal Capcom fans who were once cheering for Hiryu moved on to Street Fighter as their number one game series from their number one company. After resurrecting the protagonist for the Marvel vs. Capcom fighting game, the company realized his popularity, and decided to bring their futuristic ninja back to the video gaming world in full force. The result? Strider 2, a completely fantastic action game. 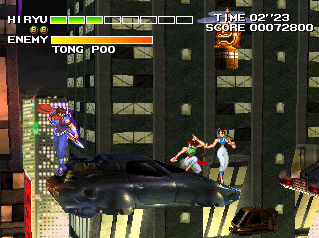 Yes, Strider Hiryu returns, looking even more badass than ever with his awesome, long, red scarf to compliment his dark blue ninja outfit. The story is that Mr. Evil himself, Grandmaster Meio, has somehow returned from his grave and is now about to destroy the world. Not one to refuse the opportunity to slice an old enemy in half yet again, Hiryu takes off, cypher in hand, ready to do some serious damage.

It’s really not much of a plot, but that hardly matters when the game itself is just so impressive. Still shot cutscenes with excellent artwork, illustrated by Harumaru, help to augment the story, just like in the original game. The Japanese version – in both the arcade and home versions – has fully voiced dialogue and narration. Unfortunately, Capcom never bothered to dub the game into English, so they cut all of it out. 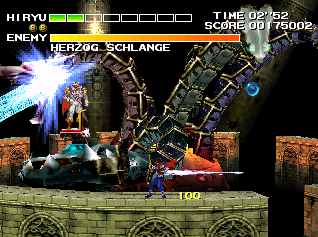 Like the first game, Hiryu has to brave himself through five stages to get right to kicking Meio’s ass. Unlike the first game, Hiryu can actually choose from the first four and pick which order he wants to infiltrate them. These stages include a futuristic cityscape, a technologically advanced castle, an icy outpost where evil experiments happen, and the reprise of the flying battleship Balrog. After beating them, Strider has to return to the reconstructed Third Moon and eliminate the Grandmaster, and any other evils that he may find.

In 1999, polygons were still a relatively new thing in the video game world, but Capcom used them to their greatest extent to create some gorgeous objects and landscapes. The characters themselves are not constructed of polygons, but are rather two-dimensional sprites. The game is displayed from a 2.5D perspective. Hiryu can only move left, right, up, and down like a typical side-scrolling platformer, but the scenery actually revolves around him so gameplay can stay 2D. For example, when climbing to the top of a spire in stage 2, Hiryu sees a cannon in the background that he needs to destroy, but instead of traveling into the background directly, the entire screen turns so Hiryu can face the cannon on the same plane. It allows the game to keep its very unique and beautiful graphics while keeping the gameplay strictly 2D. However, due to the scaling, the sprites do end up looking splotchy at times. 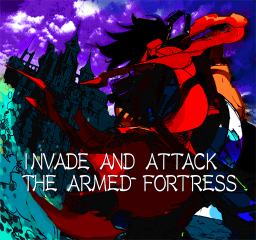 The sprites are well animated, and would not look out of place in an anime. Hiryu walks with dignity, runs with determination, and slashes with fury. Solo returns, and looks even more badass than ever, what with his giant energy rings that he flings at you. The Grandmaster’s face can’t be seen, and he just looks like the perfect anime villain. However, the really big bosses are made of polygons, and they look pretty good for 1999. The animation can be a bit wonky at times, but that mechanical hydra in the Herzog Schlange fight is just freaking gorgeous. The bosses are even more exciting than they were in the original Strider, although the final battle is way too cheap.

Each BGM is extremely appropriate for its corresponding stage, especially the incredible music of the city stage, which captures the feel of a nighttime city under siege. The opening music to the castle stage is ominous yet dramatic, and the tune that plays while Hiryu is flying around the Balrog’s airspace sounds perfect for such aerodynamic action. As for the sound effects, they are very well done, with all sorts of Japanese yells from numerous characters. 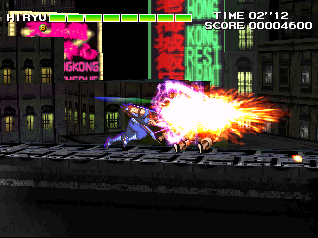 The action is extremely fast-paced, and Hiryu slashes immediately upon a press of the attack button. He runs with a double-tap of the control pad, can double-jump to reach new heights, climb walls as he did in the first game, and he even has a multi-slash attack that he can perform in midair. Besides the Attack and Jump commands, there are also Slide and Boost buttons. Obviously, the Slide allows Hiryu to perform a low dashing slide that he can combine with slashes to quickly decimate enemies. It’s not as useful as it could be, though.

When things get iffy, pressing the Boost button causes homing energy blasts to fly out of Hiryu’s weapon, that can obliterate surrounding enemies in a matter of seconds. That’s good, as the screen is often filled with several enemies to dispatch. Other times, the challenge comes from some tricky jumping, obstacle dodging, or boss fighting.

Each stage has at least three mid-bosses to get through before the end boss, and many of them provide a great challenge. Especially fun is level four’s ending battle against Admiral Wilhelm, an experienced swordfighter who challenges you while on an escape ship speeding away from a burning Balrog. There’s just something awesome about a one-on-one duel taking place on a remote ship floating several miles above the Earth’s atmosphere. Amazing.

At times, these battles can be just a little bit too challenging, and Hiryu isn’t endowed with a high number of bars in his life meter. The fast pace of the action can be overwhelming, and as a result, it’s easy to get obliterated in a matter of seconds in some of the game’s rougher situations. However, it’s possible to continue infinitely in the same place where Hiryu died. Since this was an arcade game, this made sense in order to keep the players pumping in quarters, but it was never rebalanced for the PlayStation home conversion. This makes it a bit too easy to get through the game, but on the other hand, it may just be too overwhelming to beat without having to use a single continue. The biggest issue of Strider 2, then, is the difficulty balance. 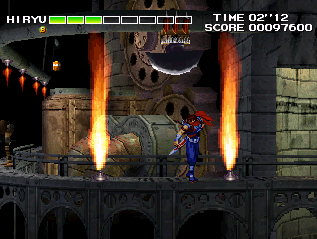 The PlayStation port of Strider 2 is highly recommended. The arcade game runs on the Sony ZN-2 board, which is almost identical to the PlayStation hardware. Additionally. it also contains a bonus disc with a port of the original arcade Strider. Also, there are a few bonuses for Strider 2, such as an extra jungle level (unlockable if played with a memory card with a completed save file of the original Strider) with a ton of bosses, and the ability (unlockable after beating the game once) to play as Hiryu’s rival, Strider Hien. 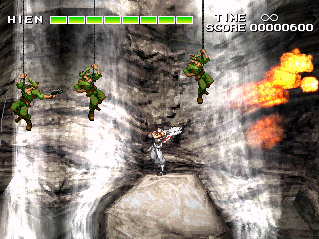 Hien does not have a conventional slashing cypher, but two homing cyphers which he throws out at enemies that do all the killing for him. He cannot use Boosts, but why would he have to with the homing cyphers? It’s considerably easier to beat the game with Hien, and also incredibly fun.